(Actor and Former Professional Wrestler Widely Known for His portrayal of 'Drax the Destroyer' in the MCU.)

David Michael “Dave” Bautista Jr. is an actor and former professional wrestler from America. Beginning his career as one of the biggest stars of World Wrestling Entertainment (WWE), he has also built an impressive résumé as an actor over the course of the last ten years. Raised in a multi-cultural, poverty-stricken family, Bautista left home at the age of 17 and did a series of off-the-wall jobs before turning his attention to professional bodybuilding. From 2000 to 2010 and then from 2013 to 2014, Bautista wrestled for WWE under the ring name Batista. He was crowned the World Heavyweight Champion four times and the WWE Champion twice. He has also won the Royal Rumble twice, the World Tag Team Championship three times, and the WWE Tag Team Championship once. Batista still holds the record for holding the World Heavyweight Championship for the longest time at 282 days. He has headlined WWE’s flagship event WrestleMania several times. After debuting as an actor in the 2006 comedy film ‘Relative Strangers’, Bautista has become one of the most sought-after character actors in the industry today. His breakthrough role came about in 2014, when he was cast as Drax the Destroyer in the Marvel Cinematic Universe film ‘Guardians of the Galaxy’. Besides reprising the role in two other Marvel movies, Bautista played a Bond villain in the 2015 release ‘Spectra’ and was part of the stellar cast of one of the most important science fiction films of the recent times, ‘Blade Runner 2049’. In 2011, he received the Hitflics.com Performer of the Year for his performance in the action comedy, ‘House of the Rising Sun’. American People
Wrestlers
WWE Wrestlers
American Men
Tall Celebrities
Childhood & Early Life
Dave Bautista was born on January 18, 1969, in Washington, D.C., to Donna Raye (née Mullins) and David Michael Bautista. His father, whose own parents were from the Philippines, still works as a hairdresser in the DC area. His parents divorced when Bautista was still young and he was subsequently raised by his mother, who is of Greek descent. At some point, Donna came out as a lesbian and Bautista has been supportive of her decision, dubbing himself as “a proud son of a lesbian”.
He has a sister who was named after their mother as well as a brother named Michael. Bautista has talked about the financial difficulties his family had to face when he was a child. Furthermore, the neighbourhood he grew up in was quite violent. By the time he turned nine, he had witnessed three murders on their front lawn. He himself had committed criminal activities as a teenager. At the age of 13, he was stealing cars.
Bautista had a serious falling out with his parents when he was 17. He then left home and started living on his own. He worked as a bouncer for several clubs before he was arrested for a brawl that left two of the patrons injured. He was eventually sentenced to one year of probation.
After getting released from the prison, he developed an interest in professional bodybuilding. He has since stated that bodybuilding potentially saved his life. 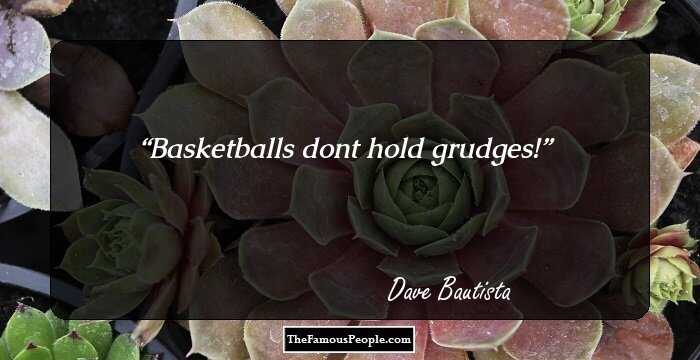 Continue Reading Below
Professional Wrestling Career
After being involved in professional bodybuilding for a while, Dave Bautista wanted to pursue a career in professional wrestling. This was a period when the industry still had other promotions competing with WWE on equal footing. Bautista first approached World Wrestling Championship (WCW) and gave an audition at the WWC Power Plant but Sgt Buddy Lee Parker., who was working as one of the trainers there at the time, told him that he would never succeed in the professional wrestling business.
Bautista then went to their biggest rival, WWE. After a successful tryout, WWE designated him to the Wild Samoan Training Center wrestling school to train under Afa Anoa'i. He also got lessons in Muay Thai and Eskrima. Bautista soon began to wrestle for Anoa'i’s World Xtreme Wrestling (WXW) promotion.
Subsequently, Bautista signed a contract with WWE and started competing at one of their developmental territory, Ohio Valley Wrestling. In 2000, he made his debut under the ring name Leviathan and went on to win the OVW Heavyweight Championship. His rapid progression in the promotion convinced WWE to include him in the WWE main roster.
After participating in several non-televised events, Bautista made his television debut on May 9, 2002, on a SmackDown episode under the ring name Deacon Batista, serving as the heel enforcer of Reverend D'Von. His in-ring debut came about on 6 June, when he teamed up with D'Von for a tag-team match against Faarooq and Randy Orton and went on to pin Orton.
After he split from D'Von, Bautista began to simply use ‘Batista’ as his ring name. He was not initially supposed to join Evolution, a villainous professional wrestling stable in WWE which was a part of its Raw brand from 2003 to 2005. Mark Jindrak was picked at first as the group’s enforcer and even began filming vignettes with the rest of the group before Batista replaced him.
According to the storyline, each member of the group was the ideal representative of: "the past" (Ric Flair), "the present" (Triple H), and "the future" (Randy Orton and Batista) of professional wrestling. The group dominated most of the major storylines in WWE for those two years and at one point, each member of the group had a title belt. Batista and Flair were the World Tag Team Champions, Orton was the Intercontinental Champion, and Triple H was the World Heavyweight Champion.
Batista’s journey of becoming the World Heavyweight Champion started off with the gradual disintegration of Evolution. Orton had already been pushed out of the group and Batista challenged Triple H and Flair when he announced that he would wrestle Triple H for the World Heavyweight Championship at WrestleMania 21. Their feud was cited as "the peak of one of [WWE's] best storylines in years” by sports journalist Dave Meltzer.
Batista was the World Heavyweight Champion from April 3, 2005, to January 13, 2006, breaking the previous record of 280 days set by Triple H by two days. He was part of various feuds in the next two years. He regained the Heavyweight Championship at the 2006 Survivor Series but lost it to The Undertaker at WrestleMania 23. In 2005, he was ranked at #1 in the Pro Wrestling Illustrated 500’s list of 500 best singles wrestlers. He was also named the Wrestler of the Year by PWI.
Batista would win the Heavyweight Championship two more times, at the 2007 Unforgiven and at the 2008 Cyber Sunday. He won the WWE Raw Tag Team Championship with Rey Mysterio on the December 13, 2005 episode of Smackdown. He claimed the World Tag Team Championship three times, twice with Flair as part of Evolution (2003 Armageddon and the March 22, 2004 episode of Raw) and once with John Cena (the August 4, 2008 episode of Raw).
Continue Reading Below
At the 2009 Extreme Rules, Batista became the WWE Champion for the first time after he defeated Orton. However, he had to vacate two days later due to a genuine injury to his left biceps. He would eventually win back the belt at the 2010 Elimination Chamber but would lose it to John Cena. In the subsequent months, he continued to be part of the main storylines. However, as he later stated, he was dissatisfied with the direction the company was taking and eventually quit the promotion in May 2010.
In December 2013, after gaining modest popularity as an actor, Batista returned to WWE and won the 2014 Royal Rumble. Despite being reintroduced as a face character, Batista was booed by the audience. The most popular professional wrestler at the time was Daniel Bryan and the fans felt that he had been unjustifiably kept out of the main storyline because of backstage politics.
Batista spent his most recent tenure in WWE battling newer wrestlers. Both he and Orton lost to Bryan at WrestleMania XXX. Afterwards, they got together with Triple H to reform Evolution and the group went on to be defeated by The Shield. Batista once again left WWE sometime in mid-2014. 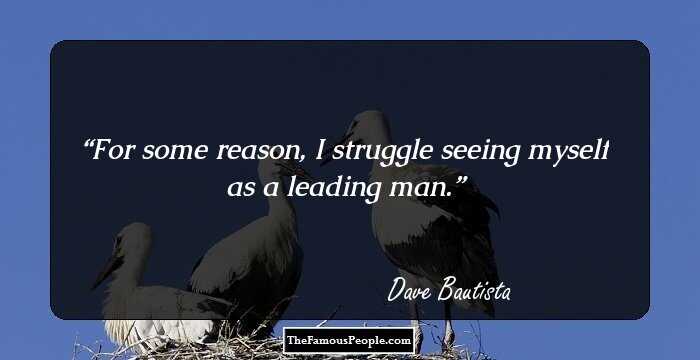 Acting Career
Dave Bautista made his cinematic debut in an unaccredited role in Greg Glienna’s directorial venture ‘Relative Strangers’ (2006). His next film appearance came about three years later, in the 2009 American-German film ‘My Son, My Son, What Have Ye Done?’ He had his first starring role in the 2010 direct-to-DVD action film ‘Wrong Side of Town’.
His outing as Ray Shane, an ex-vice cop who had just been released after serving five years in prison, in ‘House of the Rising Sun’, earned him critical praise. He played various roles in ‘The Scorpion King 3: Battle for Redemption’ (2012), ‘The Man with the Iron Fists (2012), and ‘Riddick’ (2013).
In October 2014, he joined the cast of the 24th film in the James Bond franchise, ‘Spectre’, portraying a character named Mr. Hinx. He had only one spoken word in the entire film, “Shit”, but accepted the role because he has been a lifelong fan of the Bond film series.
Bautista played Sapper Morton, a Nexus-8 Replicant and combat medic, in the 2017 neo-noir science fiction film ‘Blade Runner 2049’. Some of Bautista’s upcoming films are ‘Escape Plan 2: Hades’, ‘Master Z: Ip Man Legacy’ and ‘Stuber’.
Major Works
Dave Bautista was cast as Drax the Destroyer in the superhero film ‘Guardians of the Galaxy.’ The film was in its post-production period when Bautista returned to WWE. The film was released in the US on August 1, 2014, only a couple of months after he left WWE for the second time. Directed by James Gunn, the movie turned out to be a massive critical and commercial success.
Bautista went on to reprise his role as Drax the Destroyer in the film’s sequel ‘Guardians of the Galaxy Vol. 2’ (2017) and ‘Avengers: Infinity War’ (2018). He is set to return in the sequels for both films, slated to be released in 2020 and 2019, respectively. 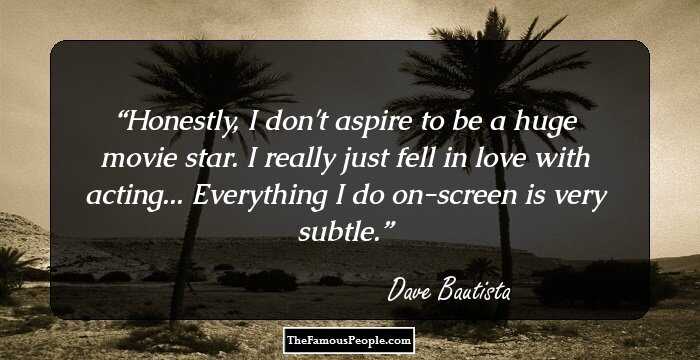 Other Activities
Bautista had one professional mixed martial arts outing against veteran journeyman fighter Vince Lucero on October 6, 2012, a match that he won in the first round via technical knock down.
Personal Life
Dave Bautista has been married three times. He married his first wife, a woman named Glenda, on March 25, 1990. They have two daughters together, Keilani (born 1990) and Athena (1992). Through Keilani, he is the grandfather of two boys, Jacob and Aiden. Bautista and Glenda eventually parted ways on April 1, 1998.
Bautista’s second wife was Angie Lewis, whom he married in the same year he got divorced from Glenda, on November 16, 1998. They were married for close to eight years before getting divorced in 2006. Since October 2015, he has been married to competitive pole dancer Sarah Jade. He had previously dated WWE divas Melina Perez, Kelly Kelly, and Rosa Mendes.
Bautista’s autobiography, ‘Batista Unleashed’, was published on October 16, 2007, through Pocket Books. In the book, Bautista dealt with some of the most controversial issues in his life, including his relationship with Chris Benoit.
He has several tattoos on his body that he has accumulated over the years. He has a dragon on his back, the word “Angel” written in red Kanji lettering on his upper left biceps as a tribute to his former wife, Angie, a signature design on his upper right biceps, and the sun on his stomach, surrounding his belly button. He also has the flags of the Philippines and Greece tattooed on his arm.
Trivia
Bautista is a devoted collector of steel lunch boxes!

Quotes By Dave Bautista | Quote Of The Day | Top 100 Quotes

See the events in life of Dave Bautista in Chronological Order