Advanced Search
Dane DeHann is an American actor and model who is widely considered to be one of the top upcoming actors in Hollywood. An established star with roles in movies like ‘Chronicle’ and ‘The Amazing Spider-Man 2’, the actor is equally infamous for his part in ‘Valerian and the City of a Thousand Planets’. Besides acting, he is also a model, having been featured on the cover of ‘GQ Italia’, ‘GQ Style Germany’ and has modeled for ‘Prada’. A method actor, Dane is often seen becoming a part of the dark characters. However, he has stated that if he is allowed to pick anything in the world as a career he wants to be a professional golfer. Growing up, the actor was hugely influenced by the industry icons like James Dean, Philip Seymour Hoffman, and Al Pacino. DeHaan has also headlined music videos by rock bands like Metallica and Imagine Dragons. Known for his humility, the actor has been associated with charitable events like the ‘2017 Travelers Championship’ and ‘Giving Tuesday’. American People
Pennsylvania Actors
Aquarius Actors
American Actors
Actors Who Are In Their 30s
Career & Fame
Dane DeHaan started his career with the comedy short ‘Woodrow Wilson’ in 2005. In 2008, he worked on stage around the time when he was graduating from the ‘University of North Carolina School of the Arts’. He was an understudy for actor Haley Joel Osment in the Broadway production of David Mamet’s ‘American Buffalo’. Although the production closed after just eight performances Dane gained valuable experience. The same year he debuted on TV in the episode ‘Lunacy’ of ‘Law & Order Special Victims Unit’ and also appeared in the short ‘Stormy Weather’.
2010 turned out to be a great year for the young actor. He started the year appearing in the TV movies ‘At Risk’ and ‘The Front’ which aired in April. He also won an ‘Obie Award’ for his stellar performance in the Off-Broadway play ‘The Aliens’. He followed that up with his movie debut in the American-Filipino drama film ‘Amigo’. All of these helped Dane land his breakthrough role of Jesse D’Amato in the third season of the HBO drama series ‘In Treatment’. His turn as an angry, aggressive, vulnerable, and adopted teenager was applauded by all critics and established him as an actor. In 2011, the actor portrayed Timbo on the TV series ‘True Blood’.
In 2012, the actor landed the role of Andrew Detmer in the found-footage-thriller ‘Chronicle’. The movie made US$ 126.6 million against a budget of US$ 12 million making it the surprise blockbuster of the year. The movie established Dane DeHaan as a bankable star and earned him the ‘Breakthrough Performance of the Year’ at the 2012 ‘Golden Schmoes Awards’. The same year he also has starred in movies like ‘Lawless’, ‘The Place Beyond the Pines’, and the Oscar winner ‘Lincoln’. In 2013, Dane won the ‘Breakthrough Actor’ award at ‘Gotham Awards’ for his outstanding performance as Lucien Carr in the biographical drama ‘Kill Your Darlings’. He was also seen in the thriller concert movie ‘Metallica: Through the Never’ and ‘Devil’s Knot’.
By this time Dane DeHaan had established himself as someone capable of portraying darker characters with considerable panache. Perhaps this is why he was cast in the role of Green Goblin or Harry Osborn in ‘The Amazing Spider-Man 2’ (2014). The movie made US$709 million and became one of the highest grossing movies of his career. In 2015, he was seen in the movie ‘Life’ where he portrayed one of his acting idols, James Dean. In 2016, the actor was seen in the independent movie ‘Two Loves and a Bear’ and voice acted in ‘Ballerina’.
2017, however, turned out to be a disappointing year for the actor. The movie ‘A Cure for Wellness’ bombed at the box. In the same year, he suffered the biggest commercial flop of his career with ‘Valerian and the City of a Thousand Planets’. It was not only critically panned but lead actors Dane DeHaan and Cara Delevingne received severely negative reviews as well. His next venture ‘Tulip Fever’ was unsuccessful as well. He intends to make a comeback with the iconic role of Billy the Kid in the upcoming ‘The Kid’ (2018).
Recommended Lists:

American Film & Theater Personalities
Aquarius Men
Continue Reading Below
Personal Life
Dane William DeHaan was born to Jeff DeHaan and Cynthia Boscia on February 6, 1986, in Allentown, Pennsylvania, USA. He went to Emmaus High School in Pennsylvania and graduated from the ‘University of North Carolina School of the Arts’. Dane DeHaan has a sister named Meghann Carl and is married to actress Anna Wood since June 30, 2012. The couple welcomed their first daughter Bowie Rose DeHaan on April 2, 2017. The actor loves playing golf and often participates in charity events. 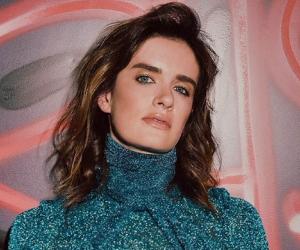