The longest living Dalai Lama, Tenzin Gyatso is the 14th and the present Dalai Lama and holds the profile of a spiritual and political leader of Tibet. Head monk of the Gelugpa lineage of Tibetan Buddhism, Dalai Lamas are said to be reincarnated souls in the line of tulkus, who are considered to be manifestations of the bodhisattva of compassion. Spiritual leader of Tibetan Buddhism, and in the tradition of Bodhisattva, Dalai Lamas are said to spend their entire life committed to promoting humanity. These souls chose to be reincarnated instead of attaining ‘nirvana’ for the benefit of the society and mankind. Dalai Lama is a combination of Mongolian word, Dalai and Tibetan word lama. While former means ocean, the latter stands for teacher. Since 1391 until date, there have been 14 Dalai Lamas, from the first Gedun Drupa until the present Tenzin Gyatso. Coming back to the 14th Dalai Lama, he was appointed at the age of two and was formally recognized when he was 15. Fearing assassination, he fled from Tibet and stationed himself and thousands of refugees in Dharmasala Himachal Pradesh. He established the Tibetan Parliament in Exile and has been an advocator for the Tibetan across the globe. Ever since his enthronement, he has strived to make Tibet an independent and democratic state, free from the dominance by People’s Republic of China. He strongly preaches as well as practices the importance of non-violence and peace and significance of compassion. For his outstanding achievements and relentless work on peace, he has been bestowed with the Nobel Peace Prize. Male Leaders
Cancer Leaders
Cancer Men
Childhood & Early Life
Born to a farming family in a small hamlet located in Takster, Amdo, north-eastern Tibet, Lhamo Donrub, as he was then christened, was fifth of the sixteen children in the family. He was one of the seven to survive childhood.
If the legends are to be believed, it is said that there were numerous omens and spiritual signs that intercepted Lhamo as the reincarnation of the 13th Dalai Lama, Thubten Gyatso.
The head of the preserved body of the 13th Dalai Lama which was facing southeast had mysteriously turned northeast, indicating the direction in which his successor would be found. Later on, the Regent, Reting Rinpoche, had a vision which indicated Amdo as the region where the successor would be found.
Interestingly, when young Lhamo was presented with various relics, some of which belonged to the 13th Dalai Lama and some not, he immediately recognized those that were owned by his predecessor. Thus, at the tender age of two, young Lhamo was proclaimed as the 14th Dalai Lama was renamed Tenzin Gyatso.
Gyatso was not enthroned until the age of fifteen. As a result, the Regent acted as the head of the Tibetan parliament or Kashag until that time.
Gyatso received his monastic education starting at the age of six. While Yongdzin Trijang Rinpoche was his junior teacher, Yongdzin Ling Rinpoche served as his senior teacher.
It was at the age of 23 that His Holiness (as he referred to on the Dalai Lama website) took his final examination at Lhasa's Jokhang Temple during the annual Monlam or prayer Festival. He passed the exam with distinction and was awarded Geshe Lharampa degree, the highest-level degree, equivalent to a doctorate in Buddhist philosophy. 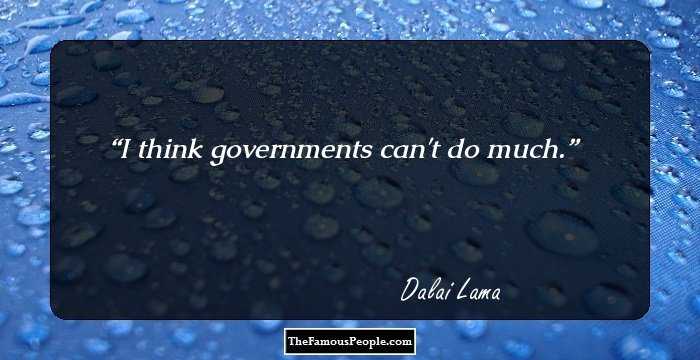 The Sexiest Men Of 2020, Ranked
Role As a Leader
Meanwhile, relations between People’s Republic of China and Tibet had worsened in Tenzin Gyatso’s growing years. Ma Bufang prevented the Tibetans from gaining independence. He even threatened Tibet with aerial bombardment lest it seeked helped from the Japanese.
Ma Bufang attacked various Tibetan Buddhist monasteries such as the Tsang monastery and Labrang monastery.
In 1950, the army of the People's Republic of China had defeated the Tibetan counterparts and marched up to the edge of the Dalai Lama's territory, sending a delegation thereafter. Almost a month later, the 14th Dalai Lama ascended to His throne, assuming full political power and was formally adjudged as the temporal ruler of Tibet.
His first major political move was when he sent a delegation from Tibet to Beijing in 1950, which endorsed the Seventeen Point Agreement for the Peaceful Liberation of Tibet.
Four years later, along with the 10th Panchen Lama, he crossed borders to meet the Chinese leader Mao Zedong, Deng Xiaoping and Chou Enlai for initiating peace talks. He attended the first session of the National People's Congress as a delegate. Later on, he was selected as a deputy chairman of the Standing Committee of the National People's Congress, a post he officially held until 1964
With the 1959 Tibetan uprising and the brutal suppression of the same in the Lhasa region by the Chinese troops, the Dalai Lama was forced to escape into exile for the fear of assassination. Assisted by the CIA Special Activities Division, the Dalai Lama crossed the border to reach Tezpur in Assam, India.
His Holiness established a Government of Tibet in Exile in Dharamsala, a city in the Kangra district of Himachal Pradesh, India. The city came to be known as ‘Little Lhasa’. Since then, His Holiness has been living in Dharamsala.
Accompanying him were almost 80,000 Tibetans refugees who followed him through the journey and settled in Dharamsala. His Holiness settled them in various agricultural settlements
Seeking to preserve the Tibetan culture and education system, the Dalai Lama established a Tibetan educational system in order to teach the Tibetan children the language, history, religion, and culture. In the following years, he started the Tibetan Institute of Performing Arts and the Central Institute of Higher Tibetan Studies, both of which became the primary university for Tibetans in India.
Continue Reading Below
His Holiness not just focussed on teaching the refugees the Tibetan culture, history and religion, he even initiated re-founding several monasteries and nunneries. The latter was basically his attempt to uphold and preserve the Tibetan Buddhist teaching and lifestyle.
After the Chinese invasion, the Dalai Lama, through his Central Tibetan Administration, made appeals in the United Nations for the rights of Tibetans. The appeals led to the formation of three resolutions, which was adopted by the General Assembly in 1959, 1961 and 1965.
Each of the resolutions targeted China to provide Tibetans the basic human rights. Acting further to the cause, His Holiness established a democratic constitution, idolizing it upon the Universal Declaration of Human Rights in 1963. He created an elected parliament and an administration to champion his cause.
Almost seven years later, the Dalai Lama opened to the world one of the most important institutions of Tibetology - the Library of Tibetan Works and Archives in Dharamsala. Housing more than 80,000 manuscripts and important knowledge resources related to Tibetan history, politics and culture, the institution is a mecca for someone who wants to get in-depth information about Tibetan history and its culture.
In 1973, His Holiness met Pope Paul VI in Vatican City. Since then, he visited Pope John Paul II on numerous occasions in 1980, 1982, 1986, 1988, 1990 and 2003.
He is also believed to have held extensive interfaith dialogue with people of the Jewish faith. While he first met them in Dharamshala, where a delegation of Jewish teachers had come, he also visited Israel thrice and even had a meeting with the Chief Rabbi of the country.
In 1987, he travelled all the way to the West for the Congressional Human Rights Caucus held in Washington, D.C, where he talked about Tibet turning into a ‘zone of peace’ or a sanctuary where enlightened people could retreat and live in peace without nuclear weapons.
The plan which was mostly sketchy and imprecise turned to become a proposal, later on being popularly known as the ‘Strasbourg Proposal’. According to it, he professed for a self-governing Tibet ‘in association with the People's Republic of China’. However, in 1991 the plan was rejected by the Tibetan Government in Exile because of Chinese leadership’s negative attitude towards the proposal..
In 2007, the Dalai Lama participated in the Third Meeting of the Board of World Religious Leaders held in Amritsar India. Currently a member of the Board of World Religious Leaders as part of The Elijah Interfaith Institute, he was there to discuss on the topic of love and forgiveness.
Continue Reading Below
The Dalai Lama has conducted numerous teaching activities across various institutions in the US. The first was when he was selected as the Presidential Distinguished Professor at Emory University in Atlanta, Georgia. Thereafter, he gave lectures at the University of Michigan, conducted a series of teachings at Lehigh University and gave a public lecture at the Colgate University. 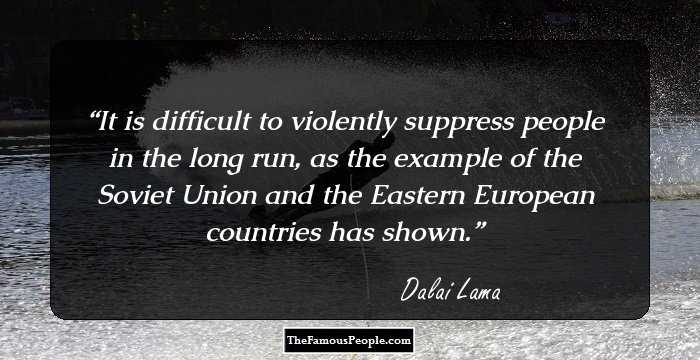 Perspective & Opinion on Social Causes
His Holiness the Dalai Lama has held strong viewpoints about various social causes. To start off with, he is a strong advocator of democracy and non-violence and considers himself as the messenger of India, who is mainly assisting in spreading the message of non-violence and religious harmony. He envisions a world where tolerance and dialogue precedes violence and discord.
The Dalai Lama’s take on abortion is not a very rigid one. Though he condemns the act and considers it sacrilegious, in special cases where the unborn child can be retarded after birth or when there is a harm of life during pregnancy, he thinks it to be ethically acceptable.
On the economic front, His Holiness has firm belief in true Marxist policy and not those practiced by certain countries. He believes that Marxism is the only economic theory that is concerned with equal distribution of wealth and equitable utilisation of the means of production. It also pays equal importance on all the class of the society, right from working class to those who are underprivileged and victims of the minority class who face exploitation.
The Dalai Lama strongly upholds the cause for safeguarding the environment. He has given numerous talks across the globe about the cause. He believes in preserving the environment and conserving the wildlife.
Other social aspects which have drawn the attention of His Holiness include women’s rights and health. While he claims himself as a feminist and proclaims that women have the ability to create a compassionate world due to their nurturing nature, health is also supremely important and only a healthy living can help attain peace of mind, body and soul.
Awards & Achievements
He was honoured with Nobel Peace Prize in 1989 for his nonviolent efforts efforts for the liberation of Tibet.
In 2005, Dalai Lama was proffered the Christmas Humphreys Award by the Buddhist Society in United Kingdom.
His Holiness the Dalai Lama is the proud recipient of the Congressional Gold Medal, the highest civilian award, which was conferred upon him by the American lawmakers in 2007. 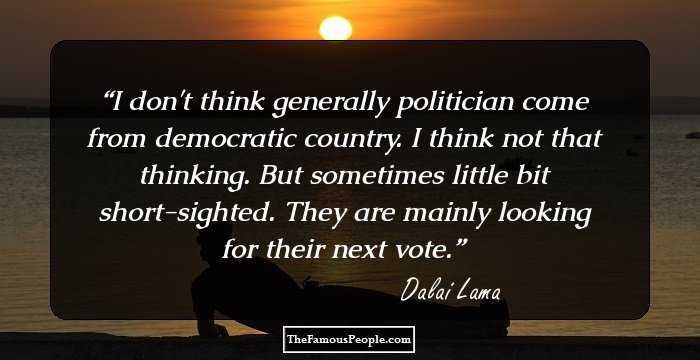 Trivia
"A dirty foot is a pure foot" is reportedly quoted by one of the fourteen Dalai Lamas. Practicing what he preaches, he is said to wash his feet every six months in accordance to his beliefs.
You May Like

See the events in life of Dalai Lama in Chronological Order 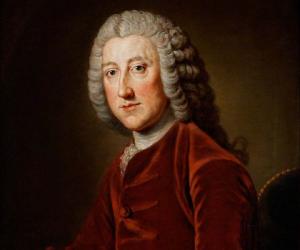