Craig Ferguson best known as the host of the award winning show ‘The Late Late show with Craig Ferguson’, is not just a television host, but also a stand-up comedian, actor, director, writer, producer and voice artist. He is an American citizen of Scottish origin. A versatile personality, he has, in addition to hosting a very popular show, written and starred in three films, and published two books. He began his career in entertainment as a drummer in a rock band but soon realized that comedy was his actual passion. He created a character that was a “parody of all the uber-patriotic native folk singers who seemed to infect every public performance in Scotland.” He called this character ‘Bing Hitler’, which subsequently became a big hit. He also tried his hand at, and found success in music theatre. His starred as ‘Confidence’ in his very first television appearance in an episode of BBC sitcom ‘Red Dwarf’. He also appeared in ‘The Craig Ferguson Show’, which co-starred Paul Whitehouse and Helen Atkinson-Wood. Even though the show was broadcast throughout the UK, it was not made into a full series. He moved to Los Angeles, US and got his big break in 1996 when he was cast as Mr.Wick on ‘The Drew Carey Show’, a role that he portrayed till 2003. 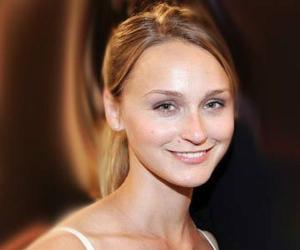 American People
TV Presenters
Stand-up Comedians
American Men
Tall Celebrities
Childhood & Early Life
Craig Ferguson was born in Glasgow district, Scotland to Robert Ferguson, a postal worker and Janet. He has three siblings: two sisters and one brother. His sister Lynn Ferguson is also a successful comedian and writer.
He was raised as a Scottish Presbyterian and attended Muirfield Primary School and Cumbernauld High School. At the age of 16, he dropped out of high school “mainly to drink.” 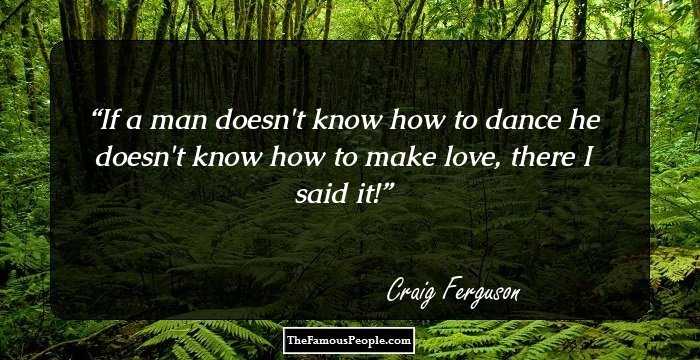 Quotes: Love, I
Continue Reading Below
You May Like

Who Is The Most Popular BTS Member?
Career
He began his career in show business as a drummer in a punk band called “The Bastards from Hell.” Then he worked as a bartender in a local Glasgow pub where he was introduced to Michael Boyd, the artistic director of The Tron Theatre in Glasgow. It was Boyd who inspired him to give acting a chance.
His first television appearance was as ‘Confidence’ in an episode of sitcom ‘Red Dwarf’ in 1989. After discovering that he had a knack for comedy, Ferguson hosted ‘The Ferguson Theory’ in 1993 which blended his stand-up acts with filmed sketches.
Apart from comedy, he also presented his series on Scottish archaeology in 1993, titled ‘Dirt Detective’, which focused on historical sites throughout Scotland.
He moved to Los Angeles, US in 1994 and got his first role as a baker in the short-lived comedy ‘Maybe this Time’, which also starred Betty White and Marie Osmond.
He got his major breakthrough when he was chosen for the role of Nigel Wick, the evil but lovable boss in ‘The Drew Carey Show’. He played this role from 1996 to 2003.
Apart from doing stand-up comedy and hosting shows, Ferguson also wrote and starred in three films, also directing one of them: ‘The Big Tease’ (1999), ‘Saving Grace’ (2000) and ‘I’ll Be There’ (2003).
He succeeded Craig Kilborn as the host on CBS’s ‘The Late Late Show’ in December 2004 and his first show as the regular host was aired in January 2005.
He made his debut as a writer in 2006 with the publication of his novel ‘Between the Bridge and the River’. In 2009, he published his memoir ‘American on Purpose: The Improbable Adventures of an Unlikely Patriot’. The audiobook version of his memoir was nominated for a Best Spoken Word Album Grammy in 2010. 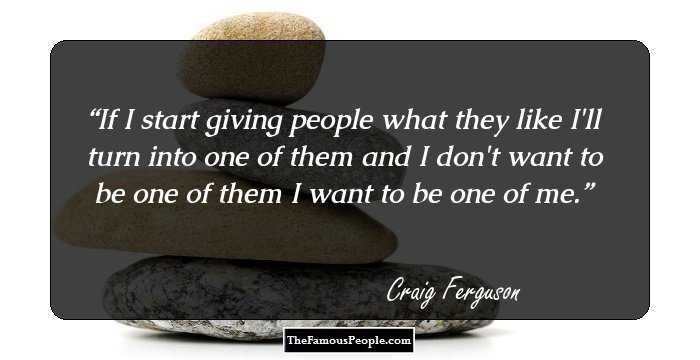 Quotes: Me, Like, I
Continue Reading Below
Major Works
He is most well-known for hosting ‘The Late Late Show with Craig Ferguson’, a US late-night talk show. His first show as host was broadcasted on January 3, 2005 while December 15, 2009 marked his 1000th episode as host. His contract with CBS to host the show extends through 2014.
Ferguson was also very popular as Nigel Wick, the title character’s evil but lovable boss in ‘The Drew Carey Show’ in which he played an eccentric and unlucky Englishman.
He lent his voice to ‘Gobber the Belch’ in the 2010 3D computer-animated fantasy film ‘How to Train Your Dragon’. The movie was a critical as well a commercial success, which won many awards including the Best Animated Feature.
He was also part of the voice cast of ‘Brave’, a computer-animated award winning fantasy comedy released in 2012.
Awards & Achievements
His directorial debut ‘I’ll be There’ (2003) won the Audience award for Best Film at the Aspen, Dallas and Valencia film festivals. He also wrote and starred in the film.
His debut novel ‘Between the Bridge and the River’ made it to the best seller list in 2006. His 2009 memoir ‘American on Purpose: The Improbable Adventures of an Unlikely Patriot’ was listed on the New York Times bestseller list.
Ferguson’s show ‘The Late Late Show with Craig Ferguson’ won the prestigious Peabody Award in 2010 for Excellence in Broadcasting for his interview with Archbishop Desmond Tutu. 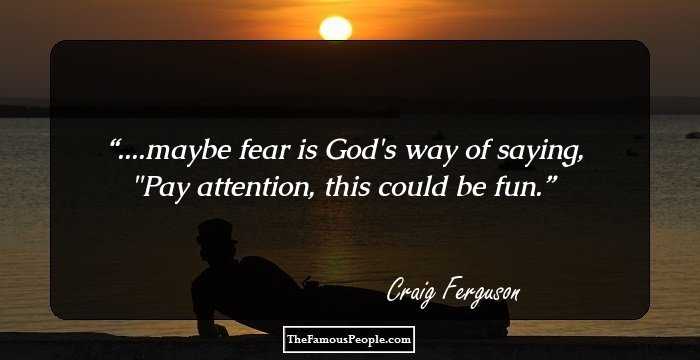 Quotes: Fear
Personal Life & Legacy
Ferguson was previously married to Anne Hogarth and Sascha Corwin. Both the marriages ended in divorce. He has one son, Milo, with Corwin.
He is currently married to Megan Wallace-Cunningham, an art dealer. They have one son, Liam James.
Trivia
Ferguson took flying lessons in order to overcome his fear of flying.
He serves on the board of the Lollipop Theater Network, which brings movies currently in theatrical release to children hospitalized with chronic or life-threatening illnesses nationwide.

Quotes By Craig Ferguson | Quote Of The Day | Top 100 Quotes

See the events in life of Craig Ferguson in Chronological Order