Chuck Close was an American painter who rose to fame as a photorealist with his large-scale, intricate portraits of the human face. He was known for his extraordinary artistic abilities and inventive techniques which made him one of the most innovative artists of the contemporary times. A major figure of the painting movement of Photorealism which emerged during the 1970s, he is credited to have made the genre of photorealism an artistic medium in its own right. By effortlessly blurring the distinction between photography and painting, he has created several magnificent works of art which are much sought after by museums and collectors. Born as the son of artistically inclined parents, he too developed an early interest in the arts. He suffered from severe dyslexia as a child and sought solace in art and soon realized that he was blessed with a high degree of creativity and artistic abilities. He studied at Academy of Fine Arts Vienna before embarking on his career and eventually turned his attention towards photorealism. Throughout his life he was plagued by ill health and he suffered from several medical conditions. However, his illnesses never thwarted his ambitions as a painter. Tasya van Ree
DID WE MISS SOMEONE?
CLICK HERE AND TELL US
WE'LL MAKE SURE
THEY'RE HERE A.S.A.P
Quick Facts

American Celebrities
American Men
Yale University
University Of Washington
American Artists
Childhood & Early Life
Charles Thomas "Chuck" Close was born on July 5, 1940 in Monroe, Washington. His father, Leslie Durward Close, was a sheet metal worker, while his mother Mildred Wagner was a trained pianist.
He suffered from severe dyslexia as a child because of which he could not perform well in school. He was interested in art from an early age and realized as a little boy that he wanted to be an artist.
His father suffered from ill health and died when Chuck was just 11. To add to the family’s miseries, his mother was diagnosed with breast cancer, and they lost their home because of mounting medical bills. Moreover, Chuck too fell severely ill with a kidney infection.
He remained dedicated to art while bravely facing all his problems and was accepted into the University of Washington in Seattle from where he graduated in 1962.
He then went to the Yale University to study for a Master of Fine Arts from the university's Art and Architecture School and received his Master of Fine Arts in 1964. After Yale, he studied at Academy of Fine Arts Vienna for a while on a Fulbright grant. 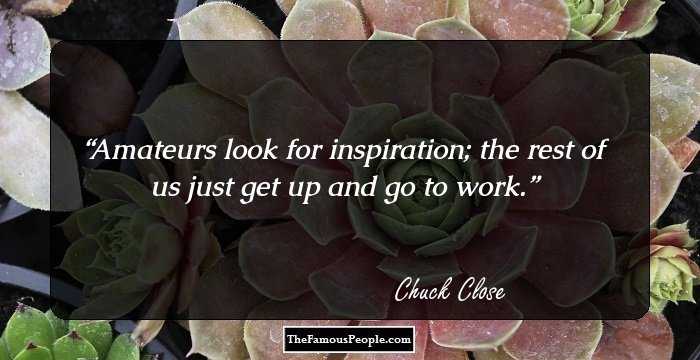 Continue Reading Below
Career
Chuck Close returned to the US after completing his studies and took up the position of an art teacher at the University of Massachusetts. He moved to New York City in 1967.
He had been known for his skillful brushwork as a graduate student at Yale University where he displayed an interest in abstract expressionism. Gradually he began to divert from his old style and was drawn towards “photorealist” painting, a painting style resembling photography in its close attention to detail.

By the late 1960s he had started to gain prominence and his work was displayed in important New York galleries and at the Whitney Museum of American Art. With time he became more popular and was exhibiting in prestigious international exhibitions in the early 1970s.

Over the 1970s, he mastered the art of creating the glossy, mirror-like "look" of the photograph, and after achieving this ideal he turned his attention to portraiture. He created larger than life works, starting with a gridded photograph.
He became especially known for his bold and intricate portraits of the human face in spite of suffering from prosopagnosia—also known as face blindness—a condition which interferes with his ability to recognize human faces.

Over his illustrious career he had created several wall-size tapestry portraits in which each image is composed of thousands of combinations of woven colored thread. Some of the subjects he depicted on his tapestries include Barack Obama, Lou Reed, Kate Moss, Lucas Samaras, and Philip Glass. 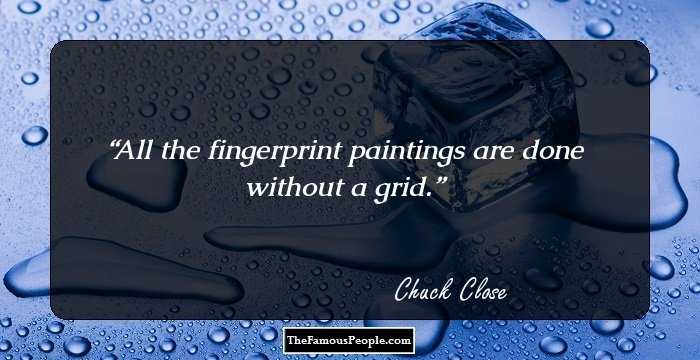 Awards & Achievements
He was elected into the National Academy of Design as an Associate Academician in 1990, and became a full Academician in 1992.
He received the National Medal of Arts from President Clinton in 2000. He is also the recipient of the New York State Governor's Art Award.
In 2010, he was appointed by President Barack Obama to the President's Committee on the Arts and Humanities.
Personal Life, Legacy & Death

His first marriage was to Leslie Rose with whom he had two daughters. The couple divorced in 2011.

In 1988, he suffered a seizure which left him paralyzed from the neck down. He spent months in rehab strengthening his muscles with physical therapy and learned to use a wheelchair. Ever the resilient soul, he returned to painting and re-established himself as one of America’s favorite artists.

In 2015, Close was diagnosed with frontotemporal dementia. Chuck Close died on 19th August 2021, from congestive heart failure, in Oceanside New York. He was 81. 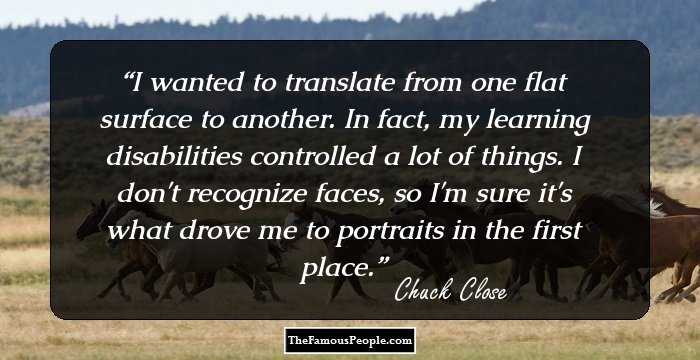 Quotes: Me, Learning, I
Trivia
Chuck Close was one of the volunteers in President Barack Obama's Turnaround Arts initiative, in which he mentored 34 students in the sixth through eighth grades at Roosevelt School in Bridgeport, Connecticut

Quotes By Chuck Close | Quote Of The Day | Top 100 Quotes

See the events in life of Chuck Close in Chronological Order