Christopher Morley was a famous American journalist, essayist and poet. Go through this biography to learn more about his profile, childhood, life and timeline. DID WE MISS SOMEONE?
CLICK HERE AND TELL US
WE'LL MAKE SURE
THEY'RE HERE A.S.A.P
Popularity Index
Media Personalities #569
Christopher Morley
Quick Facts

Megyn Kelly
Christopher Morley was an extremely illustrious journalist, novelist and a man of many words. Apart from his career in journalism, he also produced a number of stage productions. His large gamut of works spans over 100 books, articles and essays, out of which some of his best-known works include ‘The Haunted Bookshop’, ‘Parnassus on Wheels’ and ‘Kitty Foyle’. The amusing author embarked on a fertile career which produced a stream of successful works that carved a permanent place for him as one of the most influential journalist-novelists of all time. Just as he started out as a writer, a number of stories and articles were published in the ‘Haverfordian’, for which he also served as an editor at one point. Apart from writing novels and essays, he was also a poet and is best-remembered for the collection of poems entitled, ‘The Eighth Sin’. Throughout his lifetime, he contributed for many magazines and was one of the co-founders and editors of ‘Saturday Review of Literature’. Apart from publishing a number of short stories and plays, he also used to give lectures in colleges. Journalists
American Men
Haverford College
Male Writers
Childhood & Early Life
Christopher Morley was born to Lilian Janet Bird and Frank Morley in Bryn Mawr, Pennsylvania. His father was a mathematics professor and his mother was a violinist, who inspired his love for poetry and literature.
After the family moved to Baltimore, Maryland, he studied at Haverford College, from where he graduated in 1910 as a valedictorian. He then went on to New College, Oxford on a Rhodes scholarship, to study modern history.
While he was still in college, he was the editor for ‘The Haverfordian’ and contributed a number of articles to the publication. He was also actively involved with the drama program in college.
In 1912, he published his first set of poems titled, ‘The Eighth Sin’. The next year, he completed his education and began work as a publicist and publisher’s reader. 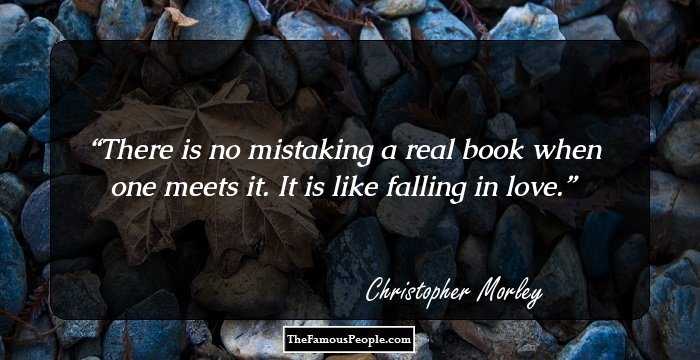 Taurus Writers
Male Novelists
Male Journalists
American Writers
Career
In 1917, he was made the editor for ‘Ladies’ Home Journal’; a position he served with the publication for a year. He was then made a newspaper reporter and newspaper columnist for ‘Philadelphia Evening Public Ledger’.
In 1917, he also wrote his first novel, ‘Parnassus on Wheels’. The protagonist of the novel reappeared in a second novel written by Morley two years later titled, ‘The Haunted Bookshop’.
In 1920, he wrote a column titled ‘The Bowling Green’ for the New York Evening Post after he returned to New York City. It was around this time, he became a longtime contributing editor of the ‘Saturday Review of Literature’.
He authored one of his best-remembered works, ‘Thunder on the Left’, in 1925. Three years later, he authored a collection of essays titled, ‘Off the Deep End’.
From 1928 to 1930, he was actively involved in co-producing theater productions in Hoboken, New Jersey. It was during this period he was the co-author for ‘Born in a Beer Garden, or She Troupes to Conquer’ and ‘Seacoast of Bohemia’.
In 1931, he wrote the autobiographical novel, ‘John Mistletoe’, followed by a compilation of the lectures he presented at the University of Pennsylvania the subsequent year titled ‘Ex Libris Carissmis’.
In 1936, he wrote the introduction to the standard omnibus edition of ‘The Complete Sherlock Holmes’. He also wrote the introduction to ‘The Complete Works of Shakespeare’ the same year and was selected to brush up and broaden ‘Bartlett’s Familiar Quotations’.
He authored one of his best-known works, ‘Kitty Foyle’ in 1939, which was later made into an Academy Award-winning film.
In 1944, he conducted an analysis of Arthur Conan Doyle’s work, ‘Sherlock Holmes and Dr. Watson’. Three years later, he wrote a book of poetry titled, ‘The Old Mandarin’. The same time, he penned the poetry, ‘On Vimy Ridge’.
Continue Reading Below
His last works before his death was a novel titled, ‘The Man Who Made Friends with Himself’. 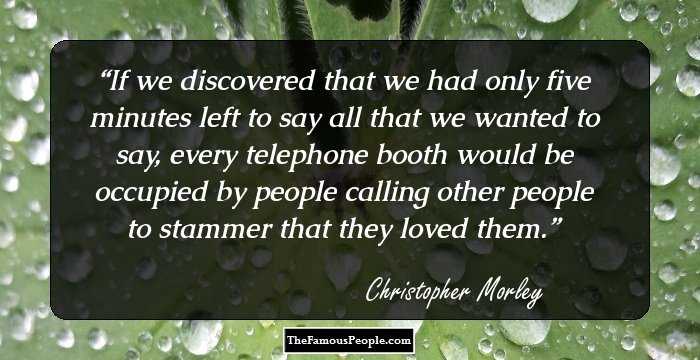 American Novelists
American Journalists
Male Media Personalities
American Media Personalities
Major Works
His 1939 novel, ‘Kitty Foyle’ is regarded as his literary masterpiece, which became a best-seller in the year of its release, selling over one million copies. The bold publication became so successful that it spawned a film of the same title in 1940, which also became a blockbuster hit. In addition to the hit film which won an Academy Award, ‘Kitty Foyle’ was also adapted for radio and television.
Recommended Lists:

Taurus Men
Personal Life & Legacy
On June 14, 1914, he married Helen Booth Fairchild, with whom he had four children. Right after their wedding, the couple lived in Hempstead, followed by Queens Village, Philadelphia and finally settling in a house they called ‘Green Escape’, where they would live for the remainder part of their lives.
In 1936, he built a separate cabin for himself behind the ‘Green Escape’ property, which he used for writing.
He suffered a number of strokes during his lifetime, which eventually ended up affecting his literary output and productivity.
He passed away and was interred in Roslyn Cemetery, New York. After his death, his widow sold an assortment of his personal papers and books to the Harry Ransom Center and the University of Texas at Austin. 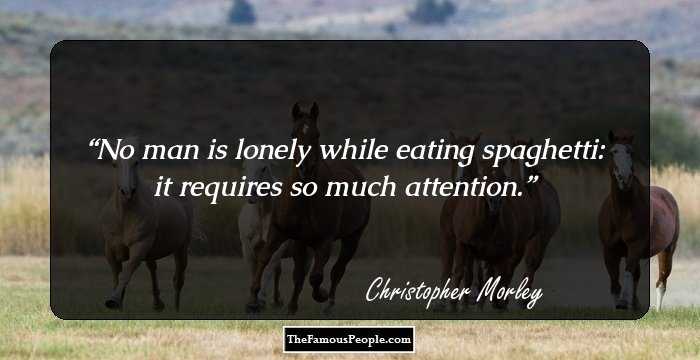 Trivia
This famous American journalist, essayist and novelist of the ‘Kitty Foyle’ fame, wrote his own epitaph for the dictionary, ‘Twentieth Century Authors’.
You May Like

Quotes By Christopher Morley | Quote Of The Day | Top 100 Quotes

See the events in life of Christopher Morley in Chronological Order