There are many explorers who have redefined history, however, there are few who have influenced the very establishment of certain countries. Christopher Columbus is one such historical figure who changed the perception of the American continents for the European countries. Through his four significant voyages he not only discovered new land masses, but also initiated Spanish colonization and the establishment of several new societies. After a lot of struggle to get the support of the Spanish and Portuguese governments, he finally succeeded in getting a grant which funded his travels. He set out to discover Asia for its spices and condiments. However, he ended up discovering Hispaniola. Even though he was not the first to discover America, he did open the gateway between Europe and America and paved the way for the exploration and conquest of America by the Europeans. A strained relationship with the Spanish crown, worked to his disadvantage and he was divested of the Governorship of the island of Hispaniola which he discovered himself. His life was a historical journey, which reflected his adventurous and righteous personality, and earned him a permanent place in the annals of explorations. To learn more interesting information pertaining to this great explorer’s personal life and achievements, continue reading his biography. Marco Polo
DID WE MISS SOMEONE?
CLICK HERE AND TELL US
WE'LL MAKE SURE
THEY'RE HERE A.S.A.P
Quick Facts

Also Known As: Cristoforo Colombo, Admiral of the Ocean Sea

Italian People
Explorers
Italian Men
Italian Explorers
Scorpio Men
Childhood & Early Life:
Christopher Columbus was born in a middle-class family in Genoa which is now a part of Italy. His father, Domenico Colombo was a wool weaver and his mother was Susanna Fontanarossa. He had three brothers named Bartolomeo, Giovanni Pellegrino and Giacomo and a sister, Bianchinetta.
In 1473, he took a job as an apprentice and was a business agent for some families in Genoa. During this time, he also visited Chios which was Genoese colony. 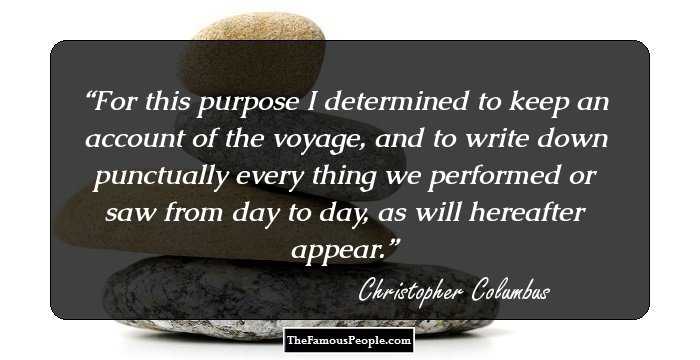 Quotes: Will, I
Continue Reading Below
Later Life
During the 1470s, Columbus toured several places for trading, such as, Northern Europe and England. According to certain historical accounts, he also spent some time in Iceland.
In 1479, he met his brother Bartolomeo in Lisbon. He got married and settled there until his wife died in 1485. After the death of his wife, Columbus and his son moved to Spain. Here he made an effort to win a grant which would allow him to explore the western trade routes.
For a long time, he pursued the Portuguese and Spanish kings but they did not support his plans. Eventually, his plans were considered by King Ferdinand and Queen Isabella. He now set on to explore Asia promising to bring back condiments from China.
On August 3, 1492, Columbus embarked on his first voyage and set sail with three ships called the Pinta, Nina, and Santa Maria. He was also accompanied by 104 men. The first stop was at Canary Islands to pick up supplies and then he set out sailing across the Atlantic.
After five weeks of travel, many men died due to diseases and hunger. On October 14, 1492, a land was sighted by Rodrigo de Triana in the present day Bahamas. Columbus named this land San Salvador thinking it was Asian land.
As Columbus decided to continue sailing in search of China, he ended up reaching Cuba and Hispaniola. In November 1492, the crew on the ship Pinta was left to explore on its own.
In December 1492, Columbus’ ship Santa Maria crashed and wrecked off the coast of Hispaniola. The next year, in March, Columbus reached Spain completing his first voyage.
In September 1493, Columbus set on his second voyage with 17 ships and almost 1200 men. This time, he set sail towards the west aiming to establish colonies for Spain and search for land in the far East.
In November, the same year, his crew saw land and discovered the Dominica, Guadeloupe and Jamaica islands. He then went on to Hispaniola to check on his crew at the Fort of Navidad.
Continue Reading Below
The site of the fort was destroyed and after a battle in 1495, Columbus named this the colony of Santo Domingo and conquered the island of Hispaniola. In March, the next year, he set sail back to Spain and reached Cadiz after five months.
In May 1498, he started his third trip and left Spain with six ships heading towards Hispaniola. In July, the same year, he landed on the island of Trinidad. Next month, he explored the Gulf of Paria and finally touched South America.
In August that year, he returned back to Spain in bad health and found himself in the middle of Political turmoil.
He embarked on his fourth voyage in May 1502 and reached Hispaniola. He set sail again the same year, and discovered Central America. The next year, he reached Panama and even found a small amount of gold there. However, he was forced out of the area by the local people.
After facing a lot of problems with the ship and the crew, Columbus sailed back to Spain in 1504. After arriving there, he went on to settle in Seville with his son. 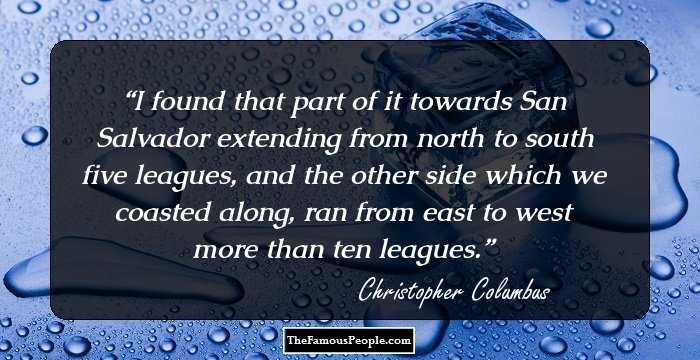 Quotes: I
Major Works
Columbus’s voyages created general awareness in the Americas for the European nations. His major accomplishment was the discovery of Hispaniola where he also helped establish permanent settlements. This led to the beginning of Spanish colonization in the New World.
With the help of his son and brother, Columbus wrote two books. He wrote his first book titled ‘Book of Privileges’ in 1502. The book gave details of the rewards which he was entitled to from the Spanish Crown.
He wrote his second book titled ‘Book of Prophecies’ in 1505. In this book he used the passages from the Bible to fit his achievements as an explorer in the Christian context.
Personal Life & Legacy
Columbus married Filipa Moniz Perestrelo, who was the daughter of Bartolomeu Perestrello, the governor of the Porto Santo, in 1479 or 1480. The couple had a son, Diego Columbus. There are reports that Filipa died in 1485 but the death is not confirmed; however, Columbus did move on from his first wife to a mistress named Beatriz Enriquez de Arana in 1487.
Columbus died due to illness at the age of 54 in Valladolid, Crown of Castile which today lies in Spain.
In his honour, Columbus Day is celebrated in the Americas every year on the second Monday in the month of October. 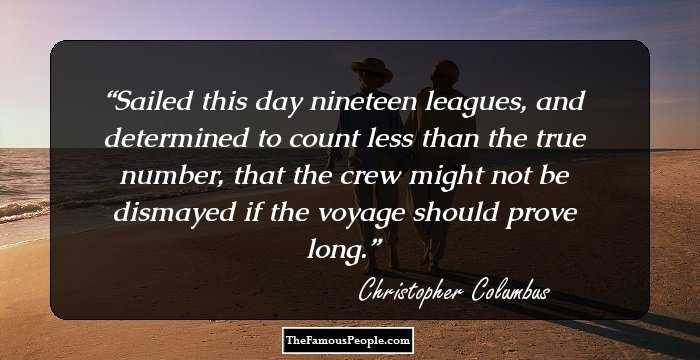 Quotes By Christopher Columbus | Quote Of The Day | Top 100 Quotes

See the events in life of Christopher Columbus in Chronological Order