Dr. Christiaan Barnard was a South African cardiac surgeon remembered for performing the world’s first human-to-human heart transplantation. Born as the son of a Dutch missionary in the arid Karoo region of South Africa, he earned his medical degree from the University of Cape Town Medical School. While serving as general physician in South Africa, he investigated into intestinal atresia and a found a cure for it. Later he attended the University of Minnesota, from where he obtained his PhD and also received his training in cardiac surgery. On returning home, he performed a number of heart surgeries before coming across a 54-year-old terminally ill grocer who was willing to undergo heart transplantation. Although the operation was successful, the patient succumbed to double pneumonia within eighteen days. Undeterred, he continued performing heart transplantations and invented a piggyback technology, which largely increased the survival rate. Unlike most other successful surgeons, he was very charismatic and was sought after by celebrities across the world. He firmly opposed apartheid and often courted controversy by employing black nurses. Mehmet Oz
DID WE MISS SOMEONE?
CLICK HERE AND TELL US
WE'LL MAKE SURE
THEY'RE HERE A.S.A.P
Quick Facts

South African Celebrities
South African Men
University Of Minnesota
Male Physicians
Male Cardiologists
Childhood & Early Life
Christiaan Neethling Barnard was born on November 8, 1922, in Beaufort West, a small country town within the arid Karoo region of Western Cape Province in Union of South Africa. His father, Adam Hendrikus Barnard, was a minister in the Dutch Reformed Church. His mother was Maria Elisabeth de Swart.
Christiaan had three surviving siblings; two brothers named Johannes Timotheus Barnard and Marius Stephanus Barnard and a sister, Dodsley Retief Barnard. Another brother, Abraham, died at the age of three while a sister was stillborn. Marius grew up to be a noted cardiac surgeon and invented critical illness insurance.
As his father ministered to the congregation of ‘colored’ people, the family was more or less shunned by the white citizens. Moreover, his meager salary meant that they led a humble life. But their mother instilled in them a belief that they could achieve their goals if they tried wholeheartedly.
Christiaan, like his siblings, had his early education at Beaufort West High School. He was not an outstanding student, but worked hard and as a result did well in school. He was also fond of music and sports.
From the obituary published in ‘The New York Times,’ we learn that he “won a school tennis championship with a borrowed racquet and cardboard covering the holes in his sneakers”. It also says that he ran a mile in his bare feet and topped the class studying by firelight.
In 1940, on graduating from school, Christiaan Barnard went to study medicine at the University of Cape Town Medical School, obtaining his MB ChB in 1945. Thereafter for two years, he served as a general practitioner in a farming village.
In 1947, Barnard returned to Cape Town and joined Groote Schuur Hospital for his internship in surgery, later doing his residency at the same hospital. Concurrently working at night, he undertook research work on bowel obstruction in infants.
On completing his residency, he moved to Ceres, then a rural town in Western Cape Province. In 1951, he returned once more to Cape Town and joined the City Hospital as a Senior Resident Medical Officer.
In 1953, he obtained both his Master of Medicine and Doctorate of Medicine from the University of Cape Town. His dissertation was titled ‘The treatment of tuberculous meningitis’. 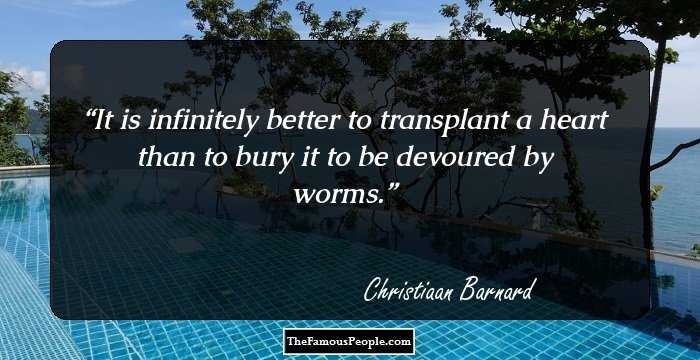 Quotes: Heart
Continue Reading Below
Career
In 1953, Christiaan Barnard began his career as a resident surgeon at Groote Schuur Hospital, Cape Town. Very soon, he resumed the work he had started as an intern at the same hospital. Working with dogs, he now started investigating into intestinal atresia, a fatal disease that had hitherto killed many.
He had a hunch that that such a condition is created in a fetus because of inadequate blood supply in the intestine. He therefore began working with dog fetuses, becoming successful after nine months at the forty-fourth attempt.
He had taken a fetus out of a dog’s womb and after tying off part of the intestine to cut off the blood supply, he placed it back in the womb. When the puppy was born two weeks after the operation, it was found to have intestinal atresia.
He later removed that part of the intestine and cured the puppy of the ailment. His technique saved at least ten babies in Cape Town and later was adopted in the UK and the USA.
In 1955, Bernard received a two-year scholarship for a postgraduate training in surgery under Dr. Owen H. Wangensteen at the University of Minnesota, USA. Accordingly, he left for the USA in December and started his training from the beginning of 1956.
Initially, he was assigned more work on the intestine. Although he accepted the assignments, he actually wanted to move on. The opportunity came when he met Vince Gott, who ran the laboratory of Walt Lillehei's, the pioneer in open heart surgery, located just across the hall.
Eventually the two scientists got to know each other well. The break came when in March 1956, Gott asked Barnard to help him run the heart-lung machine for an operation. Shortly thereafter, he switched to Lillehei's laboratory with Wangensteen’ permission.
In 1958, Barnard was awarded his degree in Master of Science in Surgery for his thesis ‘The aortic valve – problems in the fabrication and testing of a prosthetic valve’. Also in the same year, he defended his doctoral thesis, titled ‘The aetiology of congenital intestinal atresia’ and received his PhD.
In 1958, on receiving his PhD, Barnard returned to South Africa and joined Groote Schuur Hospital in Cape Town as cardiothoracic surgeon. Subsequently, he established the hospital’s first heart unit.
Continue Reading Below
In 1960, he became a full-time lecturer and Director of Surgical Research at the University of Cape Town. This was also the year he made a short visit to Moscow, where he met Vladimir Demikhov, known for his expertise in organ transplantation.
In 1961, he joined the teaching hospitals of the University of Cape Town as the Head of the Division of Cardiothoracic Surgery. In the following year, he became Associate Professor in the Department of Surgery at the University of Cape Town.
All this while, he continued to perform heart surgery. With Carl Goosen, he designed artificial valves for the human heart sometime during this period and also performed transplantation of the hearts in dogs.
In 1967, Barnard came across 54-year-old Louis Washkansky, who was suffering from extensive coronary artery disease. Barnard convinced him to undergo a heart transplant operation but had to wait for some time to get the donor heart.
His wait came to an end when on December 2, 1967, a young woman called Denise Darvall was rendered brain dead. The transplantation, which took place on December 3, lasted nine hours. Barnard was assisted by a team of thirty personnel, which included his brother Marius.
Although the transplant was successful, Washkansky died after eighteen days from double pneumonia. This was caused as the immune system collapsed because heavy doses of medicine were pushed in to prevent rejection of foreign parts by the body.
On January 2, 1968, Barnard performed his second heart transplantation on Philip Blaiberg, a 58-year-old retired dentist. This time, he lowered the doses of the drug and the patient lived for nineteen months with his new heart.
By 1974, Barnard had performed ten heart transplantations. From the point of view of patient’s survival, his 1971 heart transplantation on Dirk van Zyl was the most successful. After the operation, Zyl lived for over twenty-three years. Another patient lived for thirteen years, while two others lived for more than eighteen months.
In 1974, because of the low survival rate of patients with heart transplantation, Barnard devised a new heterotopic technique. In this piggyback technique, the donor heart is added to the patient’s diseased heart, which had been left in place.
Continue Reading Below
On November 25, 1974, he performed his first heterotopic heart on 58-year-old Ivan Taylor. He removed only the diseased portion of the heart and added to it the heart of a ten-year-old child. Although the patient died in four months, he remained optimistic about it.
From 1974 to 1983, he performed forty-nine consecutive heterotopic heart transplants. True to his optimism, he found the survival rates to be much higher in this technique as compared to standard transplantation and many patients lived for several years.
In 1983, Bernard retired as the Head of the Department of Cardiac Surgery at Groote Schuur Hospital due to rheumatoid arthritis that had limited his capacity as a surgeon. Thereafter, he spent two years as the Scientist-In-Residence at the Oklahoma Transplantation Institute in the United States.
Until 1986, he also acted as consultant for various institutions in USA and Switzerland. During this period, he became interested in anti-ageing research. But when an anti aging skin cream he promoted was banned by United States Food and Drug Administration, he decided to retire. 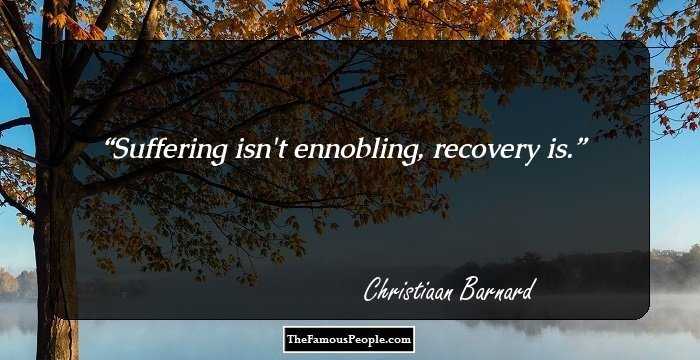 Major Works
Christiaan Barnard is best remembered for undertaking the world’s first heart transplantation operation on a human. Until then, doctors had undertaken such operations on animals but were hesitant to try it on a human. Barnard convinced a 54-year-old terminally ill grocer to undergo the operation and replaced his heart with the heart taken from a brain dead woman.
According to many medical experts today, the fact that he chose to take the heart from a brain dead person is another of his contributions to medical science. He was also the first in this regard and it paved the way for all kinds of organ transplantation.
Awards & Achievements
In 1968, Christiaan Barnard’s name was proposed for the Nobel Prize for Medicine but he failed to get it. Many believe it was because he was a white South African.
The awards he received include Dag Hammarskjold International Prize and Peace Prize, the Kennedy Foundation Award, and the Milan International Prize for Science.
Personal Life & Legacy
In 1948, Barnard married Aletta Gertruida Louw, a nurse. The couple had two children; Deirdre and Andre. The marriage ended in a divorce in 1969.
In 1970, he married nineteen-year-old Barbara Zoellner, an heiress. They had two children, Frederick and Christiaan Jr. This marriage also ended in a divorce in 1982.
In 1988, Barnard married Karin Setzkorn, a young model, forty years junior to him. They also had two children, Armin and Lara. This marriage too did not last long, ending in a divorce in 2000.
In 1998, he set up ‘The Christiaan Barnard Heart Foundation’ for helping underprivileged children. Meanwhile he had also developed business interests including animal farms in South Africa.
He was also a prolific writer. Apart from two autobiographies, ‘Christiaan Barnard: One Life’ and ‘The Second Life’, published in 1969 and 1993 respectively, he had written several other books on medicine and collaborated with others to write a few novels.
In 2001, Barnard went on a holiday to Paphos, Cyprus. There, in the morning of September 2, he went for a swim, when he suffered a fatal asthma attack and died from it.
Trivia
While making his first heart transplantation in 1967, Barnard and his team faced a severe ethical problem. At that time, the Harvard criteria of brain death was not fully developed and death could be declared only by whole body standard. The main problem was that although Denise Darvall, the donor, with a fractured skull and other head injuries, could not be revived, her heart was healthy. Therefore, she was not technically dead. At the urging of his brother Marius, Barnard injected potassium into Denise’s heart, thus paralyzing it. It made her technically dead and they then transplanted the heart.

See the events in life of Christiaan Barnard in Chronological Order