Chris Cuomo is an American journalist, anchor, and former lawyer, best known for his stint on the weeknight news show Cuomo Prime Time on CNN. He was born to Italian parents in Queens, New York. His father, Mario Cuomo, was once the governor of New York. Chris earned a bachelor’s degree from Yale and then obtained his JD (law) degree from Fordham. He then worked as a lawyer on Wall Street. However, he soon plunged into journalism, working with CNBC and Fox. In 2000, with ABC's 20/20, he became the youngest anchor in the network’s history. With time, he hosted shows such as Good Morning America. In 2013, he joined CNN and then began co-hosting their morning show New Day. In 2018, Chris began hosting Cuomo Prime Time. Chris is known for his strong criticism of Trump. Chris has won numerous awards and recognitions for his news coverage, including multiple Emmy Awards. He lives in Manhattan with his wife and three children. He is the youngest of the five children of his parents. In 1982, when Chris was 12, Mario became the governor of New York. Since then till the end of Mario’s stint as a governor in 1994, the family lived in the Governor's Mansion in Albany.

Chris grew up with his four siblings, Andrew, Maria, Margaret, and Madeline. While their father, Mario, mostly remained busy with his work, Chris’s brother, Andrew, who was 13 years Chris’s senior, raised him. Andrew later grew up to be the governor of New York.

Chris studied at The Albany Academy, a private day school located in Albany, New York. He then attended Yale, from where he earned a BA degree in 1988. He then joined Fordham and earned his Juris Doctor (JD) degree in 1995. Chris is now a licensed attorney. 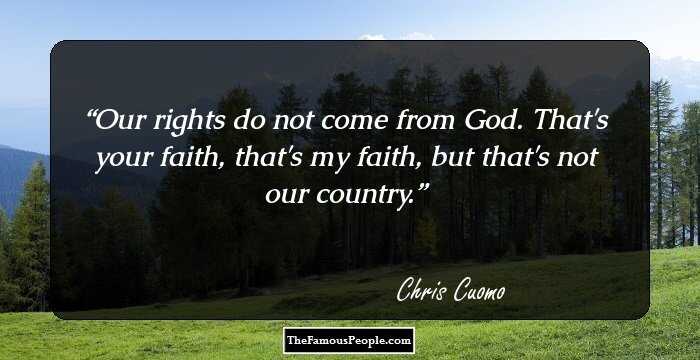 After graduating with a law degree, Chris Cuomo began his career as a Wall Street lawyer. In 1997, People magazine declared him one of its "Most Beautiful People." He was also named second on the list of "New York's Most Eligible Bachelor" (after John F. Kennedy Jr.) by W magazine.

However, soon, Chris quit his lucrative career as a lawyer and stepped into the world of journalism. In 1997, he started his journalism career with the CNBC show Equal Time. Following this, he worked as a co-host with Geraldo Rivera. He then joined Fox Files as a reporter and served as a political policy analyst for Fox News.

In 2000, Chris joined ABC's 20/20, becoming their youngest anchor in history. His debut story for the show was on the manager of the bands Backstreet Boys and NSYNC.

In 2006, he joined ABC's Good Morning America as an anchor, catering to a more mature audience. His stint on the show lasted from September 2006 to December 2009.

He worked on investigative projects of ABC and hosted the feature titled Cuomo's AmeriCANs. He also served the network as their chief law and justice correspondent.

At ABC, his stories covered grave issues such as America’s war on terrorism. He has also reported from sensitive war-torn regions such as Afghanistan, Pakistan, and Iraq.

He also covered the Fort Hood, Virginia Tech, and the Pennsylvania Amish shootings; the hurricanes Katrina and Rita; the Sago Mine disaster, and the Minneapolis bridge collapse.

While working with ABC, he managed a website titled Cuomo on the Case. He also had two weekly digital programs, titled Focus on Faith and The Real Deal.

In 2009, Chris Cuomo was seen co-hosting 20/20 with Elizabeth Vargas, working in a more significant role this time. His news programs covered issues such as heroin addiction, the Haiti earthquake, bullying, and the issues of homeless teens.

Chris moved to CNN in February 2013. His first stint as a field anchor for CNN was on an episode of Piers Morgan Tonight, on February 8, 2013. The episode featured him reporting on the February 2013 nor'easter.

He also co-hosted their 3-hour weekday morning news program, New Day (until May 2018). In October 2017, Chris hosted a five-part documentary series named Inside with Chris Cuomo on Headline News (HLN).

In June 2018, Chris began hosting the CNN program Cuomo Prime Time, which was aired at 9 p.m. on weeknights. Chris then started hosting a 2-hour-long weekday radio show titled Let’s Get After It on the P.O.T.U.S. radio channel of the SiriusXM network, in September 2018. 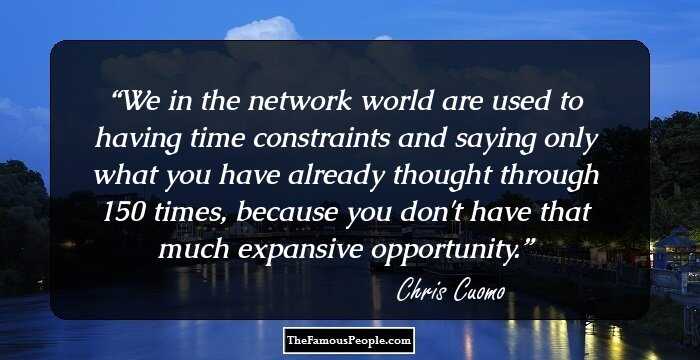 Chris Cuomo has been nominated for the Emmy Award multiple times. His Good Morning America feature on 12-year-old poet Mattie Stepanek was awarded a News Emmy. With this win, Chris became one of the youngest correspondents to earn a News Emmy in history.

Chris and his team have received the George Polk Award and the Peabody Award. He has been awarded the Edward R. Murrow Award for his breaking news coverage.

He has also received the 2005 Gerald Loeb Award for “Television Deadline” for his business reporting on the show Money for Nothing? and the American Bar Association Silver Gavel Award for his investigative reports on juvenile justice.

On August 13, 2019, Chris Cuomo abused and threatened a man who addressed him as “Fredo,” referring to the fictional character of the same name from The Godfather. The incident took place in Shelter Island, New York.

According to Chris, the word "Fredo" was equivalent to "the n-word" for Italian–Americans. 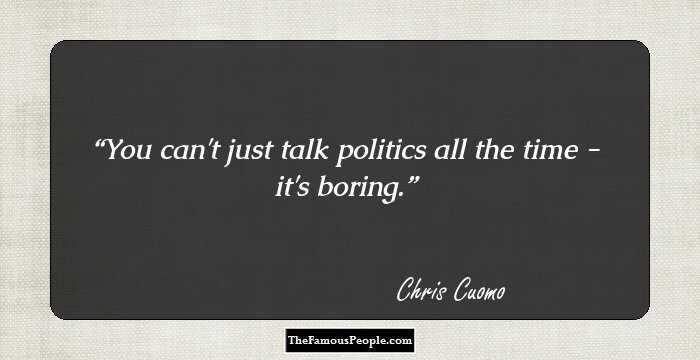 They have three children: two daughters named Bella and Carolina and a son named Mario. The family stays in Manhattan. Chris owns a house in Southampton, too.

On March 31, 2020, during the global COVID-19 pandemic, Chris Cuomo announced that he had tested positive for the disease. He thus aired his weekday program from his home, while he was on quarantine.

Two weeks later, on April 15, 2020, Chris declared that his wife, Cristina, too, had been diagnosed with COVID-19. On April 22, it was revealed Mario, their son, had also tested positive for COVID-19.

Chris Cuomo has been known for his criticism of Donald Trump. In early October 2020, when President Trump was shown walking into the White House without a mask, after being diagnosed with COVID-19, Chris criticized his nonchalant attitude toward the deadly disease using strong words.

Quotes By Chris Cuomo | Quote Of The Day | Top 100 Quotes

See the events in life of Chris Cuomo in Chronological Order