Chennupalli Vidya is the wife of Indian cricketer Ambati Rayudu. She came in the limelight after marrying the star cricketer. Despite being a celebrity wife, Chennupalli remains away from media attention. She also remained low-key when her husband was targeted for several acts of confrontation and misconduct. She met Ambati in college, and their relationship blossomed soon after. Meanwhile, Ambati began his career as a cricketer and gained prominence after playing in the 'Indian Premier League' (IPL). Unaffected by the stardom, Ambati and Chennupalli remained together. They tied the knot on Valentine’s Day 2009. Chennupalli has been a supportive wife and a dutiful homemaker. Sakshi Dhoni
DID WE MISS SOMEONE?
CLICK HERE AND TELL US
WE'LL MAKE SURE
THEY'RE HERE A.S.A.P
Quick Facts

Indian People
Libra Women
Relationship with Ambati Rayudu
Chennupalli and Ambati studied in the same college. She saw Ambati during her first year of graduation. They became friends and fell for each other eventually.
Meanwhile, Ambati started playing for Hyderabad in 2002. This was followed by his stint as the captain of the under-19 team at the 2004 'ICC Under-19 Cricket World Cup.' Ambati later played in the ‘IPL’ and turned into a celebrity. This never affected his relationship with Chennupalli. She always had faith in him and let him grow in his career.
Chennupalli and Ambati Rayudu tied the knot on February 14, 2009. They currently live in Hyderabad. Although she is now a celebrity wife, Chennupalli prefers staying away from the media. However, she is often seen in the stands, cheering for her husband. Chennupalli is active on social media and is present on both 'Facebook' and 'Instagram.'
You May Like

The Hottest Male Celebrities With The Best Abs
Continue Reading Below
Personal Life
Chennupalli was born on September 23, 1985, in Hyderabad, Telangana, India. She has a brother named Sunayan Chennupalli. Chennupalli is as also known by her nickname, “Nimmi.” She is, however, mostly addressed as “Vidya.”
Chennupalli completed her schooling from 'St. Ann’s High School' in Secunderabad, Telangana. She then joined 'Bhavan’s Vivekananda College' in Secunderabad.
Chennupalli loves to travel. Her favorite destinations are Poland, Greece, Thailand, and Austria. She is a true movie lover, and her favorite Bollywood actors are Shahrukh Khan, Aamir Khan, and Hrithik Roshan. She also adores Hollywood stars Natalie Portman and Jennifer Lawrence. Chennupalli is a food lover, too. Her favorite dishes are tandoori chicken and Hyderabadi biryani. She is also fond of jeera aloo, a vegetarian dish. Some of her favorite perfume brands are 'Bvlgari,' 'Tom Ford,' 'Burberry,' and 'Marc Jacobs.' 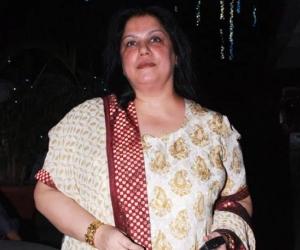