Charlie Hunnam is a reputed and established English actor who shot to fame portraying the role of ‘Nathan Maloney’ in the television drama series, ‘Queer as Folk.’ It was while goofing around at a shoe store while buying shoes for his brother on Christmas Eve that a producer chanced upon him and gave him a role in the television series ‘Byker Grove.’ After his debut, he found his next assignment in the ‘Channel 4’ drama ‘Queer as Folk’ where he played ‘Nathan Maloney.’ The television series established him as an actor and made him hog the limelight. He moved to Los Angeles to act in US films and television series. While ‘Abandon’ was his first US film, ‘Young Americans’ marked his entry into US television. Over the years, he has starred in films and television series of varied genres. One of his most remarkable performances came in the ‘FX’ series ‘Sons of Anarchy’ where he played ‘Jackson Teller.’ Hunnam has received prestigious awards, including ‘CinemaCon Award’ for ‘Male Star of the Year’ and ‘Huading Award’ for ‘Best Global Emerging Actor.’ British People
British Men
Tall Celebrities
Tall Male Celebrities
Aries Actors
Childhood & Early Life
Charlie Hunnam was born on April 10, 1980, in Newcastle, England, to William ‘Billy’ Hunnam and Jane Bell. While his father was a gangster and scrap metal merchant, his mother was a ballet dancer who owned a gift shop. He was the second biological son of the couple; he has an elder brother and two younger step-brothers.
His parents got separated when he was two years old. Growing up in Newcastle upon Tyne, he received his formal education from ‘Heaton Manor School.’ After his mother remarried and shifted base to Melmerby, Cumbria, he went along with her and got himself enrolled at the ‘Elizabeth Grammar School.’
Since he was expelled from school, he gave his exams from home. He then enrolled at the ‘Cumbria College of Art and Design’ from where he graduated with a degree in theory and history of film. 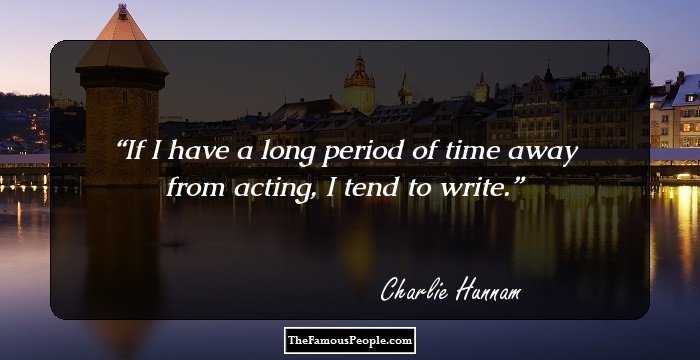 The Hottest Male Celebrities With The Best Abs
Career
When he was goofing around in a shoe store on Christmas Eve, he was spotted by a production manager of the Newcastle-based children’s show, ‘Byker Grove.’ Eventually, the production manager presented him with an opportunity to play the character of ‘Jason’ for three episodes in ‘Byker Grove.’ He was 17 years old when he landed the role.
Following his startling debut, he did not get into mainstream acting until he was 18. With the help of an agent, he got himself a role in the British-made teen series ‘Microsoap.’
It was his spectacular performance in ‘Microsoap’ that helped him land a major role in the ‘Channel 4’ drama ‘Queer as Folk,’ which revolved around the life of a homosexual teenager. In the series, he portrayed the role of a 15-year-old teenager named ‘Nathan Maloney.’
The role of ‘Nathan Maloney’ proved to be a turning point in his career. He beautifully administered the challenging task of turning the character from a shy, introvert, and innocent chap to a cocky, know-it-all gay, so much so that he became a role model for LGBT youth groups. The show was largely appreciated and recorded highest ratings at the time.
Following the ground-breaking ratings, he reprised his role as ‘Nathan Maloney’ in the two-hour sequel, ‘Queer as Folk 2.’ He then made his big-screen debut, starring as ‘Daz’ in the film ‘Whatever happened to Harold Smith?’ which released in 1999.
He then moved to Los Angeles, USA. His first stint at US television was a recurring role in the short-lived teen drama ‘Young Americans’ for the ‘WB Television Network.’ Following this, he starred in a regular role as an English drama student ‘Lloyd Haythe’ in the ‘Fox’ series ‘Undeclared.’ His perfect portrayal made the character of ‘Llyod’ seem believable and authentic.
In 2002, he made his American film debut with the psychological thriller ‘Abandon’ in which he was cast to play the role of ‘Embry Larkin,’ the missing boyfriend of a college student, played by Katie Holmes. In the movie, Larkin’s case is reopened two years later by a police detective who looks into a series of other missing cases.
The same year, he was cast to play the role of the protagonist in the movie ‘Nicholas Nickelby.’ The movie was an adaptation of Charles Dickens’ novel. In the movie, he played the role of a 19th century man whose life turns upside down after the tragic death of his father. He appeared alongside actor Christopher Plummer who played his uncle in the film.
In 2003, he was cast along with Nicole Kidman, Jude Law, and Renée Zellweger in the movie ‘Cold Mountain.’ In the movie, he played the pivotal character of a ‘Civil War’ marauder who joins the home guard and kills deserters for cash.
Continue Reading Below
He returned to the UK to star in the film ‘Green Street Hooligans.’ In the film, he played the role of a treacherous thug who encounters an American student expelled from ‘Harvard’ and teaches him the details pertaining to football hooliganism. The movie earned negative critical reviews for the unrealistic and wrongful deliverance of the Cockney accent.
Following a dismal performance as an English thug, he went on to star in the dystopian sci-fi-thriller ‘Children of Men.’ The movie had him playing the role of ‘Patric,’ a member of ‘The Fishes.’ It also starred Clive Owen and Clare-Hope Ashitey.
His performance in ‘Green Street Hooligans’ was noticed by Kurt Sutter who cast him in the role of ‘Jackson Teller’ in the television biker drama, ‘Sons of Anarchy.’ The role, which had him playing the vice president of a biker gang, got him his real breakthrough and proved to be the role of a lifetime. It also earned him a couple of nominations at award ceremonies.
In 2011, he was cast in various films, including the philosophical drama/thriller ‘The Ledge.’ The following year, he was seen in the crime drama film ‘Deadfall.’ The same year, he played an important role in the indie comedy ‘3,2,1..Frankie Go Boom’ and then played ‘Raleigh Becket’ in the sci-fi movie ‘Pacific Rim’ in 2013.
In 2015, he was cast to play ‘Alan McMichael’ in Guillermo del Toro-directed horror flick ‘Crimson Peak.’ Also starring Mia Wasikowska, Jessica Chastain, Tom Hiddleston, and Jim Beaver, the film premiered on September 25, 2015, at ‘Fantastic Fest.’
He starred in the adventure drama ‘The Lost City of Z’ (2016) as geographer ‘Percy Fawcett.’ In 2017, he played the title role in the film ‘King Arthur: Legend of the Sword.’ In 2019, he played ‘Sergeant O'Neill’ in Justin Kurzel-directed British-Australian biographical film ‘True History of the Kelly Gang.’ 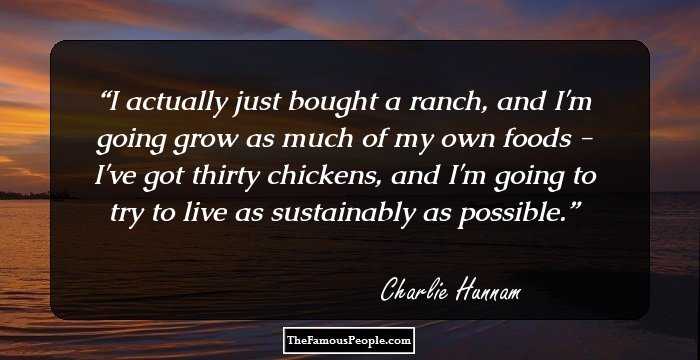 Personal Life & Legacy
He met Katharine Towne while auditioning for ‘Dawson’s Creek.’ The two were attracted to each other and tied the knot after four weeks of courtship. However, their marriage ended in divorce in 2002.
In 2005, he started dating jewelry designer Morgana McNelis. In 2016, he started training in Brazilian jiu-jitsu and received his blue belt in 2018.
Trivia
He was cast to play the role of a ‘stoner’ in the independent film ‘Anderson Cross.’ However, he could not play the role due to scheduling conflicts. Interestingly, director Jerome erased the character from the script instead of offering the role to someone else and said “no one replaces him.” 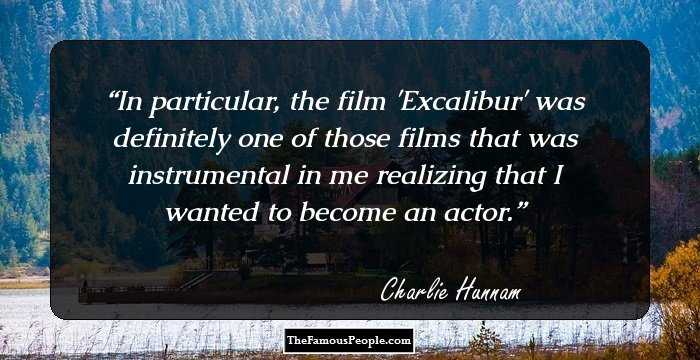 Quotes By Charlie Hunnam | Quote Of The Day | Top 100 Quotes

See the events in life of Charlie Hunnam in Chronological Order