Charles Bronson was an American actor, best known for his work in the 1970s and 1980s. Bronson dominated the film industry during the ‘70s and ‘80s with his ‘tough guy’ image. One of the most talented and versatile actors of the American film industry, Bronson was known for portraying archetypical hard-hitting characters with panache. His excellence over playing vigilante roles made him an unbeatable star in the genre. Bronson started his career as a coal miner and later worked as an air force officer. However, he soon realized his true calling and started appearing in uncredited roles in various movies. His tryst with the camera earned him numerous roles throughout the 1950s in hard-edged crime and Western drama films. However, his first major breakthrough came with the movie ‘The Magnificent Seven.’ Throughout his career, he never refrained from polishing his acting abilities and artistic talent. He is best remembered for playing the character of ‘Paul Kersey’ in the ‘Death Wish’ series. Other notable films of his career include ‘The Stone Killer,’ ‘Mr Majestyk,’ ‘Hard Times,’ and ‘Assassination.’ American Celebrities
American Men
Pennsylvania Actors
Scorpio Actors
American Actors
Childhood & Early Life
Charles Bronson was born Charles Dennis Buchinsky on 3 November 1921, in Ehrenfeld, Pennsylvania, USA, to Walter Buchinsky and Mary Valinsky. His father was a Lithuanian immigrant, while his mother belonged to the Lithuanian American society. He had 14 siblings.
Raised in a brimming family, he spoke Russian and Lithuanian as a child. It was only when he turned into a teenager that he learned speaking English. After the death of his father, he took up a job at the coal mine, earning a dollar for a ton of coal that he mined.
It was during ‘World War II’ that he gave up working in the mine and enrolled himself for military service. By 1943, he was drafted into the ‘United States Army Air Forces.’ He received a ‘Purple Heart’ for enduring wounds during his service in the war. 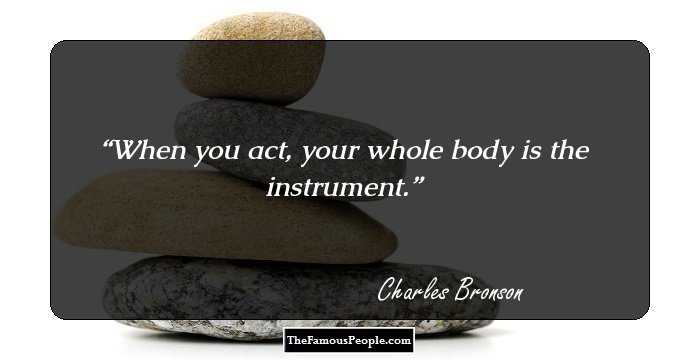 Quotes: You
Continue Reading Below
Career
After his service in ‘World War II,’ he took up various odd jobs to earn a living before joining a theatrical group. After his short stay in New York, he moved to Hollywood in 1950 where he enrolled in acting classes.
His first ever recorded screen performance was an uncredited role of a sailor in the 1951 film ‘You’re In the Navy Now.’ Thereafter, he played minor roles in a few films, including ‘Pat and Mike,’ ‘Miss Sadie Thompson,’ and ‘House of Wax.’
In 1952, he made his television appearance in Rogers’ show ‘Knockout’ and appeared in an episode of ‘The Red Skelton Show.’ It was his performance as Modoc warrior ‘Captain Jack’ in ‘Drum Beat’ that brought his acting abilities to limelight.
In 1954, he changed his surname from Buchinsky to Bronson. The change of his surname was primarily acted upon to curb any hindrance in career due to his eastern European last name.
Throughout the 1950s and 60s, he made several appearances in various television shows, including ‘Biff Baker, USA,’ ‘Sheriff of Cochise,’ ‘U.S. Marshal,’ ‘Hey, Jeannie!,’ ‘And So Died Riabouchinska,’ ‘There Was an Old Woman,’ and so on.
His growing popularity and polished acting abilities fetched him recurrent roles in various television series, such as ‘Have Gun - Will Travel’ and ‘Hennesey.’ Furthermore, he was cast in the Western series ‘Colt .45.’
His first lead role came in the 1958 released Roger Corman's film ‘Machine-Gun Kelly.’ The same year, he earned yet another lead role as ‘Mike Kovac’ in the detective series ‘Man with a Camera,’ which was aired until 1960. The series earned him several fans.
The year 1960 began with him appearing in several tele-series, including ‘Riverboat’ and ‘The Islanders.’ However, it was his role as ‘Bernardo O'Reilly’ in John Sturges’ film ‘The Magnificent Seven’ that garnered him his first actual share of fame. The film established him as an upcoming star of Hollywood.
Three years later, he was cast yet again in a Sturges production, ‘The Great Escape.’ A big budget epic film based on post-World War II era, ‘The Great Escape’ had him playing the character of a claustrophobic Polish refugee named ‘Danny Velinski.’ The film was a major box-office hit.
Continue Reading Below
Meanwhile, his tryst with small screen continued as he was featured in a supporting role for a CBS drama. From 1963 to 1967, he was cast in a number of television series, including ‘Empire,’ ‘The Travels of Jaimie McPheeters,’ ‘The Legend of Jesse James,’ and ‘Combat!’
His reputation as a ‘tough guy’ secured him main roles in films, such as ‘The Dirty Dozen’ which had Lee Marvin and Ernest Borgnine alongside him in the star cast.
Thanks to his acting talent, he moved to the Europe to find bigger and better opportunities. He landed a number of roles in European films, such as ‘Once Upon a Time in the West,’ ‘Guns for San Sebastian,’ and ‘Cold Sweat.’ He was also cast in the French film ‘Rider on the Rain.’
Watching his fame grow, American audience were keen on seeing more of him in Hollywood films. As such, he moved back to the US in the 1970s and did not look back since then. All of his subsequent releases were successful, including ‘The Valachi Papers,’ ‘The Mechanic,’ and ‘The Stone Killer.’
The year 1974 witnessed the release of his magnum opus ‘Death Wish.’ The film had him playing the character of a New York architect named ‘Paul Kersey.’ It was such a massive success that it spawned the release of four sequels in the next two decades, each having him reprise his role as ‘Kersey.’
Other than the first film of the ‘Death Wish’ series, he had one more release slated for the year 1974. ‘Mr. Majestyk’ had him playing the character of an army veteran and farmer battling with the local gangsters. The film was a major hit at the box office.
The following year, he starred in Walter Hill’s ‘Hard Times.’ The film, which was shot in the Depression-era, earned favorable reviews from the critics and audiences alike. It cemented his status as an action hero. His fans considered it to be his best role till date.
Following the release of back-to-back successful films, he appeared in average hits like ‘Breakheart Pass,’ ‘From Noon Till Three,’ and ‘Telefon.’ The ensuing decade had him playing increasingly violent roles in films, such as ‘10 to Midnight,’ ‘The Evil That Men Do,’ ‘Assassination,’ and ‘Kinjite: Forbidden Subjects.’
Some of his notable works of the 1980s came towards the end, with his role as a United Mine Worker’s leader ‘Jock Yablonski’ for the TV movie ‘Act of Vengeance.’ He then gave an impressive performance in ‘The Indian Runner.’ The film ‘Yes Virginia, There Is a Santa Claus’ was a breakaway from violent roles as it had him playing a compassionate newspaper editor.
Continue Reading Below
In 1994, ‘Death Wish V: The Face of Death,’ the last of the ‘Death Wish’ franchise, was released. It marked his last theatrical release as well. Thereafter, he was seen in various TV movies, such as ‘Family of Cops,’ ‘Breach of Faith: A Family of Cops II,’ and ‘Family of Cops III: Under Suspicion.’ 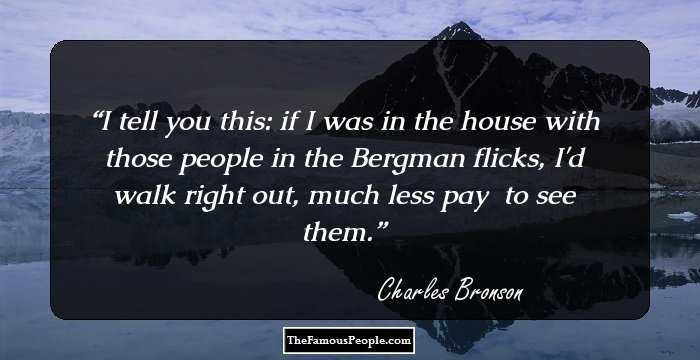 Quotes: You
Major Works
The film ‘Death Wish,’ which released in 1974, was a breakthrough movie in the career of this talented Catholic-Lithuanian born actor. The movie was a massive hit, critically and commercially, earning $22 million at the box office. The overwhelming response by fans and critics led to the release of four sequels of the film, thus turning it into a film franchise. Each of the films was well received by the audience.
Personal Life & Legacy
He was married thrice. His first marriage was to Harriet Tendler in Philadelphia in 1949. The couple was blessed with two children. They separated in 1967.
He then married actress Jill Ireland on October 5, 1968. They were blessed with a child and later adopted a daughter.
The relationship continued until Jill Ireland’s death in 1990. Eight years later, he married Kim Weeks, a former employee of ‘Dove Audio.’ The couple remained married for five years until his death in 2003.
He was honored with a star on the ‘Hollywood Walk of Fame’ in December 1980.
During the last few years of his life, his health deteriorated badly, with him suffering from Alzheimer’s disease. He underwent a hip-replacement surgery in 1998. He breathed his last on August 30, 2003, at ‘Cedars-Sinai Medical Center.’ 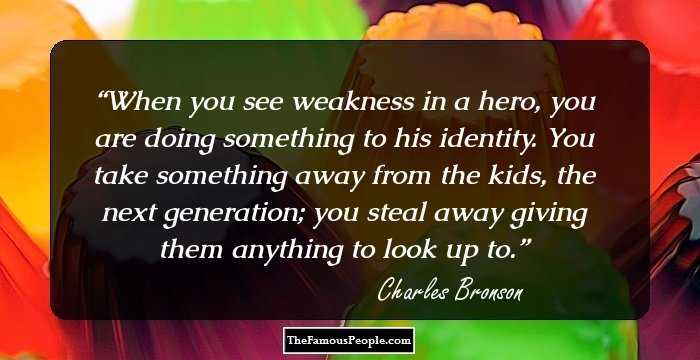 Trivia
Interestingly, this actor of ‘Death Wish’ fame changed his last name to Bronson after being inspired by the ‘Bronson Gate’ at ‘Paramount Studios’ at the north end of Bronson Avenue.

Quotes By Charles Bronson | Quote Of The Day | Top 100 Quotes

See the events in life of Charles Bronson in Chronological Order