Charlemagne or Charles the Great (also called Charles I) was a medieval ruler - the emperor of most of the Western Europe. He was one of the most famous and powerful leaders to ever reign over Europe and is termed as ‘Father of Europe’ by some historians. During his reign, he brought into force many laws in order to keep the society well-organized and encourage learning. He built several churches and palaces, most of which are still standing but his main focus was to unite the Western Europe the way it had been during the time of the ancient Roman Empire. Before his death, he had already expanded his empire from modern-day France, Belgium, and the Netherlands to include Germany, Luxembourg, Switzerland, Austria, northern Spain, and northern Italy. The centre of his empire was Aachen, a city in western Germany near modern-day Belgium. It was here that he built his palace and a remarkable church which is one of the most important historic buildings in the world. By the time Charlemagne died, his Frankish empire was as big as the Byzantine Empire and had become the largest empire in Europe since that of the ancient Romans. Also Known As: Charles the Great

French People
German People
French Men
German Men
Aries Leaders
Male Leaders
Childhood & Early Life
He was born to the King of the Franks, Pepin the Short and his wife Leutberga. His parents were not married at the time of his birth and his father was the first of the Carolingians to be the king.
In 753, when he was a child, Pope Stephen II requested his father, Pepin the Short to provide military assistance against the Lombards. Following the victory over Lombards, his father was given the kingship over Franks and in the following year, he was crowned as the king.
In 756, his father Pepin the Short again offered military assistance to Pope Stephen II against the Lombards and took away Ravenna from them which they had captured from the Byzantines.
In 760, he assisted his father in his the military efforts to triumph over Aquitaine which was the land in the south of the Loir River that used to come under Rome.
In 768, the death of his father Pepin the Short was followed by the division of his kingdom among him and his younger brother Carloman. The two brothers detested each other and a struggle ensued over the shared possessions.
In 771, his brother died unexpectedly, leaving him as the one and only leader of the entire kingdom. Following his brother’s death, he united the whole Frankish empire into one. There were many rumors regarding his involvement in his brother’s death, but he emerged out of all suspicions nonetheless. 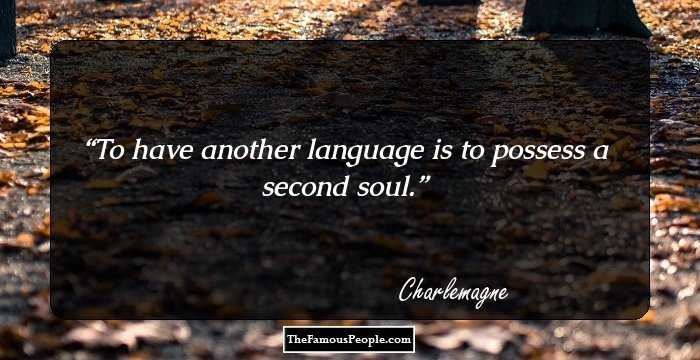 Quotes: Soul
Continue Reading Below
Accession & Reign
In 774, on Pope Adrian I’s request for help, he conquered Lombardy after taking besieging Pavia. Soon he was crowned the King of the Lombards in Pavia where he vowed to protect the Papal lands.
In 778, the battle of Roncevaux Pass took place in which commander of the rear guard of his army, Roland was defeated by the Basques. His defeat was compiled in the form of an epic literature ‘Song of Roland’ that consists of 4000 lines and is one of the oldest surviving works in French literature.
In 781, he crowned his two younger sons as kings. The elder son, Carloman, was made the king of Italy and the younger one, Louis, was given the kingship over Aquitaine.
In 782, he ordered the execution of 4500 Saxon prisoners of war at Verden in a day, in response to the attacks by the Saxon leader Widukind. It was the only unlawful murder which he carried out during his reign.
In 789, he turned to Bavaria and deposed the ruler. He forced him to renounce any claim to Bavaria in 794 and divided Bavaria into Frankish counties.
In 800, he reached the zenith of his political power when he was crowned as Emperor by Pope Leo III.
In 813, he crowned his only surviving son, Louis, after the death of his other two sons. Louis later came to be known as ‘the Pious’ and was the co-emperor till his father’s death. 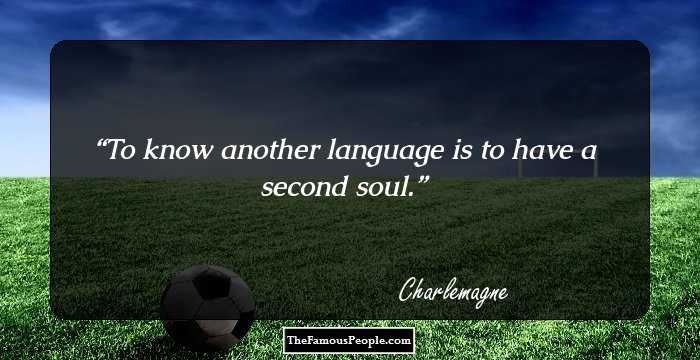 Quotes: Soul
Major Battles
In 775, he attacked a Germanic tribe Saxon who threatened the north-eastern frontiers of his new kingdom. In the same year, the Duke of Hrodgaud of Friuli rebelled but was defeated by him. Thereafter, the Duke of Spoleto signed a treaty with him and gave him the full power over Northern Italy.
Continue Reading Below
In 783, he initiated a three year campaign to conquer Saxony. Soon after, he triumphed over Saxons and enforced new set of rules to carry out proper administration of the newly conquered territories.
During 791-96, he conquered the empire of the Avars and added them to his own kingdom.
Personal Life & Legacy
In 768, he formed a relationship with Himiltrude and she became his concubine. She remained unknown for most of the years. However, the couple had two children- a daughter, Amaudru and a son, Pippin the Hunchback.
In 770, he married a Lombard princess Desiderata, daughter of King Desiderius, to conspire against his own brother Carloman by forming a Frankish-Lombard alliance. Thereafter, he disclaimed her as his wife.
In 771, he married Hildegard of Vinzgouw. This matrimonial alliance produced nine children namely, Charles the Younger, Carloman (Pippin), Adalhaid, Rotrude, Louis, Lothair, Bertha, Gisela, and Hildegarde.
In 773, he was in concubinage with Gersuinda and had a son from her named Adaltrude. This relationship was a known one unlike his first concubinage.
In 774, a daughter named Ruodhaid was born out of his relationship with his concubine Madelgard.
In 784, he married Fastrada, an East Frankish noblewoman. As his wife, she became the Queen of the Franks. This wedlock produced two daughters named Theodrada and Hiltrude.
In 794, he married Luitgard, the daughter of an Alamannian count. She did not have any children with the king and died of unknown causes. In the same year, he started living with his third concubine, Amaltrude of Vienne, with whom he had a daughter, Alpaida.
In 800, he went in to a fourth concubinage with Regina. The couple had two sons namely Drogo and Hugh, both who on distinguished posts.
In 804, he went into a relationship with his fifth concubine, Ethelind. The couple had two children, Richbod and Theodoric.
On January 28, 814, he died because of pleurisy combined with severe depression and was buried in Aachen Cathedral of Roman Catholic Church in modern Germany.
In 1949, the city of Aachen introduced an international prize called ‘Karlspreis der Stadt Aachen’ in his honor. It was given annually to meritorious candidate who encouraged western unity through creative pursuits.
Indian art form Chavittu Nadakam (Malayalam) has incorporated a play called ‘Carelman Charitham’ based on his life events.
The heavy metal in Christopher Lee’s Symphonic Metal Concept album, ‘Charlemagne: By the Sword and the Cross’ and its follow-up, ‘Charlemagne: The Omens of Death’ feature his life events.
Trivia
He restored much of the unity of the old Roman Empire and paved the way for the development of modern Europe.

See the events in life of Charlemagne in Chronological Order