(Singer-Songwriter Known for Her Songs: ‘You're So Vain’, ‘Nobody Does It Better’ & ‘Let the River Run’)

Carly Simon is an American singer who rose to fame in the 1970’s with back-to-back hit records. She has written many of her own songs and has authored a number of children’s books. She had a deep interest in music from childhood and taught herself to play the guitar. She began a music group The Simon Sisters’ with her sister Lucy. The group enjoyed minor success and made three albums together before Lucy left the band to start a family. Carly went solo in 1971 with her self-titled album ‘Carly Simon.’ She had her first big hit with her single ‘You’re so vain’, which till date remains one of her most successful songs generally regarded as her “signature song.” A Grammy Award followed and she became one of the most famous singers of the 1970’s decade. Her trail of success continued well into the next decade though the 1970’s are considered her golden period. After becoming a mother she recorded a children’s album that was very well received by the public. She followed it up by publishing a series of children’s books, thus making a foray into writing. In addition to singing and writing, Simon has also made a few film and television appearances. She is cancer survivor who fought and won a tough battle against breast cancer in the late 1990’s. Carly Simon was born on 25 June 1943, in New York. Her father, Richard Simon, a pianist by profession was also the co-founder of the famous Simon & Schuster publishing house. Her mother Andrea Louise was a civil rights activist and singer.

She went to Riverdale Country School before attending Sarah Lawrence College. She dropped out of college to pursue music. 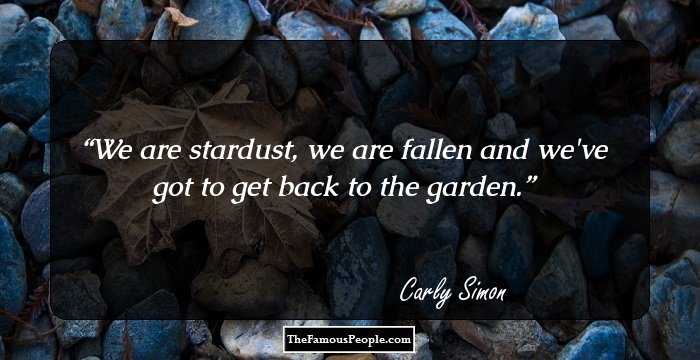 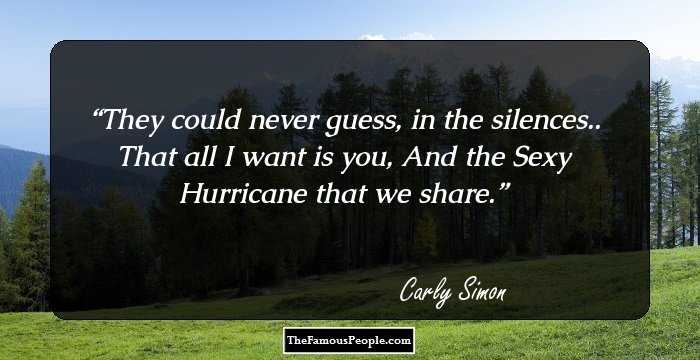 Quotes: Never, I
Major Works
Simon’s second album, ‘Anticipation’, released in 1971 was her first major hit. It was accredited Gold in the U.S by the Recording Industry Association of America (RIAA). She was nominated for Grammy in 1972 for Best Pop Female Vocalist for the song ‘Anticipation.’
Continue Reading Below
Her 1972 album ‘No Secrets’ was a huge commercial success. The hit single ‘You’re So Vain’ is regarded as her most popular song even today. The album was certified Platinum in the U.S and Gold in the U.K.
Simon’s album ‘Hotcakes’ (1974) was one of her best selling albums, accredited Gold in the U.S. it included hit singles like ‘Haven't Got Time for the Pain’ and ‘Mockingbird.’
She released a compilation album, ‘The Best of Carly Simon’ in 1975 which included her greatest hits from her previous albums. The album became a best-seller and was certified Multi-Platinum in the U.S and Gold in Canada.
The album ‘Boys in the Trees’, released in 1978 included the hit single ‘You Belong to Me’ for which Simon received a Grammy Nomination for Best Pop Female Vocalist. The album got a Platinum rating in the U.S.
Her album ‘Coming around Again’ (1987) was her first big hit after a number of years. It was certified Platinum in both the U.S and Canada, and Silver in the U.K. Simon was nominated for the Grammy in Best Pop Female Vocalist category in 1988.
In 2004, her second compilation album ‘Reflections: Carly Simon's Greatest Hits’ was released. It included a collection of some of her biggest hits and was certified Gold in the U.S.
Awards & Achievements
Shen won the Grammy Award for Best New Artist in 1972. This award is given to “a new artist who releases, during the eligibility Year, the first recording which establishes the public identity of that artist.”
Her song ‘Let the River Run’ (1988) won her three prestigious awards: Grammy Award for ‘Best Song Written Specifically for a Motion Picture or Television’ (1990); Academy Award for ‘Best Song’ (1989); and Golden Globe Award for ‘Best Original Song’ (1989).
She received the Grammy Hall of Fame Award in 2004 for her 1972 song ‘You’re So Vain.’ This Award is given to honour recordings that are at least 25 years old and that have "qualitative or historical significance". 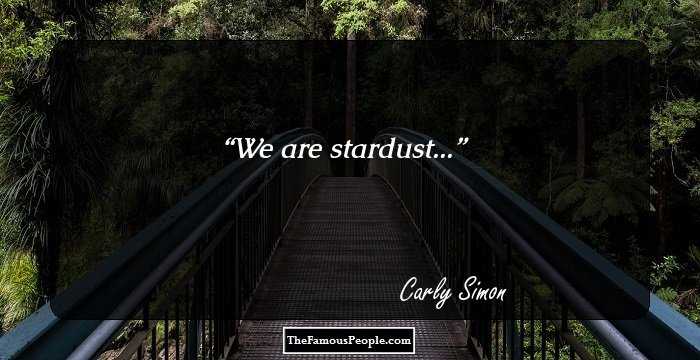 Personal Life & Legacy
Carly Simon was married to fellow singer James Taylor in 1972. They had two children, both of whom are musicians. The couple divorced in 1983. She married James Hart in 1987 and later divorced him in 2007.
Trivia
Her son, Ben Taylor, is the lead singer of The Ben Taylor Band.
She is a breast cancer survivor who was diagnosed with the disease in late 1997.

See the events in life of Carly Simon in Chronological Order