Ask a blues fan as to what propelled him to pick up the electric guitar and almost everyone would have the same answer – Buddy Guy. The most electrifying guitarist of the genre, Buddy Guy has immortalized blues music through his eclectic mixes and on-stage antics. Interestingly, he gave the genre of music a new meaning and a new definition without uprooting it from the traditional essence. What makes his compositions unique from fellow guitarists and singers is that fact that they contain a strange but idealistic mix of traditional and contemporary form of blues. A legendary musician in his own right, he was inspired by the greats like Lightnin’ Slim and Guitar Slim. An urge to make it big musically encouraged him to travel to Chicago. While he enjoyed great success from 1960s to 1970s, the decade of 70s was dull phase in his career. However, with the blues revival in 1980s, his career witnessed an upsurge and he soon was acknowledged as the blues master who brought the genre to the limelight for the rock audience as well. To know more about his life and profile, read on.
Continue Reading Below American People
American Men
Louisiana Musicians
Leo Musicians
Leo Guitarists
Childhood & Early Life
Buddy Guy was born as George Guy to Sam and Isabel Guy in Lettsworth, Louisiana. He was one of the five children born to the couple.
Musically inclined since young, he gained a strong interest in the melody and harmony which is visible from the fact that he created a makeshift two-string guitar from a piece of wood and few hairpins.
When he turned 19 years of age, he started working as a custodian in Baton Rouge at the Louisiana State University. No sooner he bought for himself his first acoustic guitar. He started playing at clubs in and around Baton Rouge. 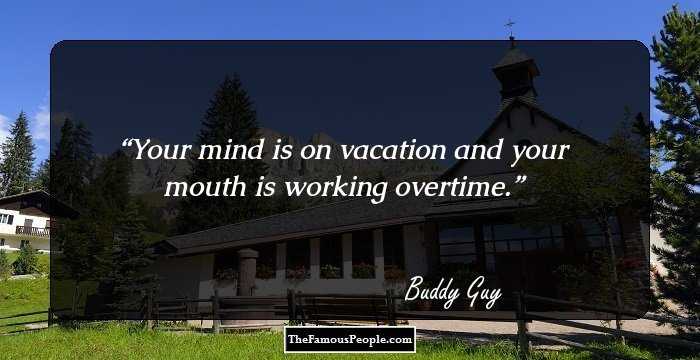 Famous Beautiful Women With Green Eyes
Career
The summer of 1957 changed the course of life for this budding enthusiastic musician who resolved to pursue a career in music. While he was honing his skills, he was inspired the awe-inspiring musical capabilities of as John Lee Hooker, Lightnin' Slim and Guitar Slim.
Upon his friends’ suggestion and with a personal will to earn a better living for himself, he left for Chicago in 1958. Reaching Chicago, assisted by fellow bluesman magic Sam, he signed a contract with Cobra Records. He continued to record singles for the company for a year until it closed down.
He then met Otis Rush who introduced him to 708 Club, a place that would eventually turn the life for him. While performing at the club, he met his idol, Muddy Waters, who in turn was deeply impressed with the fresh talent that Guy oozed out. His music was very well accepted by the club audience which led to him becoming a frequent performer.
It was while performing at the 708 Club that he was noticed by composer Willie Dixon. With Dixon’s assistance and contacts, he finally managed to bag a contract for himself with the Chess Records.
His early years of music were dominated by both conservative and business choices made by the Chess Record label. He wasn’t given the freedom to perform in his own novel style and had to stick to the choice laid out by Chess Records founder, Leonard Chess, who so much so tagged the former’s style as ‘noise’.
Throughout his career with Chess Records, he served as an in-house guitarist to back Muddy Waters, Howlin' Wolf, Little Walter, Sonny Boy Williamson, Koko Taylor and others. He even performed for Koko Taylor’s ‘Wang Dang Doodle’ and Howling Wolf’s ‘Killing Floor’
In 1960s, he started recording singles in R&B, jazz instrumentals, soul and novelty dance tunes. However, none of his recorded singles were ever released by the label. Finally, in 1967, his debut album, ‘I Left My Blues in San Francisco’ was released. The album was styled to cater to the needs of the soul era.
Following year, he ended his association with Chess Records and went on to sign a deal with Vanguard Records, with an aim to experience creative freedom. Same year, he released his second album, ‘A Man and The Blues’ and ‘Hold That Plane’.
In 1969, he appeared onstage for the Supershow at Staines in England. He performed along with the likes of Eric Clapton, Led Zeppelin, Jack Bruce, Stephen Stills, Buddy Miles, Glenn Campbell, Roland Kirk, Jon Hiseman, and The Misunderstood.
Continue Reading Below
In 1970, he released the album, ‘Buddy and the Juniors’ on Blue Thumb with inputs from harmonica player Junior Wells and pianist Junior Mance. Over the course, he developed cordial relationship with Junior Wells with whom he released his next venture titled, ‘Buddy Guy and Junior Wells Play The Blues’.
His other releases of the 1970s decade include ‘South Side Blues Jam’, ‘In The Beginning’, ‘Play The Blues’, ‘I Was Walking Through the Woods’, and ‘Got To Use Your Head’. By the 80s, his popularity gradually declined.
The diminishing popularity graph slowly witnessed a revival during the late 1980s and early 1990s. His 1989 initiated blues club, Buddy Guy’s Legend, which became a favourite hangout joint for blues musicians. Later on, he accepted the proposal of Eric Clapton to perform onstage at the London’s Royal Albert Hall during the guitarist’s multi-night run in 1990-91 which sparked off positively for him
Eventually, he signed a new contract with Silvertone and released his debut album with the record label ‘Damn Right I’ve Got The Blues’. The album instantly soared his popularity to newer heights, subsequently making him one of the most prominent blue guitarists of the Nineties.
The album, ‘Damn Right I’ve Got The Blues’ sold more than 500,000 copies earning a gold record. It included contributions made by Eric Clapton, Jeff Beck and Mark Knopfler.
Upon the successful business of Damn Right album, he released his next album with Silverstone two years later titled, ‘Feels Like Rain’. Following year, he released ‘Slippin’ In’ with the label.
In 1996, he came up with his next album titled, ‘Live: The Real Deal’ and two years later came up with ‘Heavy Love’. The decade of 1990 ended with his release, ‘Buddy’s Baddest: The Best of Buddy Guy’.
Till date, he is going strong with significant albums that have added new dimension to blues music. Additionally, he constantly tours all through, performing at various clubs and festivals around the world, including his own club 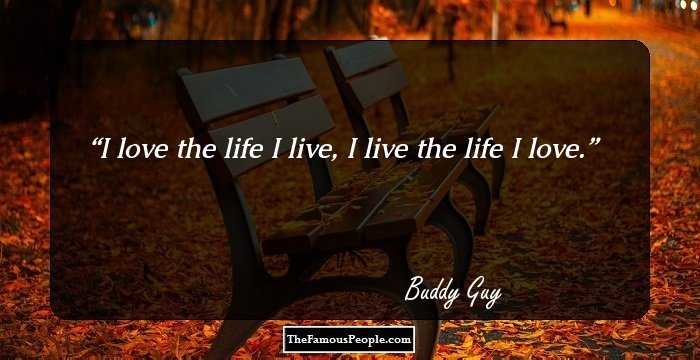 Quotes: Life, Love, I
Awards & Achievements
He is the proud recipient of six Grammy Awards for his work on both acoustic and electric guitar and contemporary and traditional form of music.
In 1996, he was inducted in Guitar Center's Hollywood Rockwalk.
In 2003, he was conferred with the National Medal of Arts for extraordinary contributions to the creation, growth and support in the arts
He has received 23 W.C. Handy Awards, which is more than what any other artist has ever received. Additionally, he received the Billboard magazine's The Century Award for distinguished artistic achievement. He was even awarded the title of Greatest Living Electric Blues Guitarist.
In 2005, he was inducted in the Rock and Roll Hall of Fame. Three years later, he was inducted in the Louisiana Music Hall of Fame.
He was awarded with the 2012 Kennedy Center Honors
Trivia
A Grammy Award winning blues musician, he has several successful albums in his kitty including, ‘Damn Right I’ve Got The Blues’ and ‘Feels Like Rain’. His song ‘Stone Crazy’ has been listed in the Rolling Stone's list of the 100 Greatest Guitar Songs of All Time.

See the events in life of Buddy Guy in Chronological Order 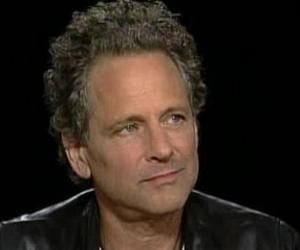