Being a singer and songwriter was an inevitable career choice for Brian McKnight as music ran in the blood of this talented and skilful artist. In his more than two decades long career, he has established himself as a successful R&B artist who has enjoyed consistent commercial success in all his endeavors, whether it is for writing the lyrics, producing an album or collaborating with the biggies of the industry. However, stardom has constantly eluded this versatile musician, his sixteen Grammy award nominations without a win, which is a record in itself, explicitly affirming the same. However, irrespective of that, McKnight has been one of the most popular and strongest talents in the list of adult contemporary R&B artists of the present generation. Through his career, he has worked with a variety of musician including Mase, Sean ‘Puffy’ Combs, Mary J. Blige, Justin Timberlake, Nelly, Vanessa Williams, and so on. Apart from being a singer and songwriter, he is a multi-instrumentalist and excels in playing eight instruments namely piano, guitar, bass guitar, percussion, trombone, tuba, flugelhorn and trumpet. Find out more about his life and career with the following write-up. American People
Actors
Black Actors
Black Singers
Soul Singers
Childhood & Early Life
Brian McKnight was born in a musically inclined family in Buffalo, New York. While his grandfather was a director by profession, his elder brother, Claude McKnight III had a band of his own.
Music ran in the blood of the family and young McKnight had no escaping it. He soon found himself following the footsteps of his elder brother right in his early days when he became a part of the choir group for a local church.
He completed his high school studies from Sweet Home High School, wherein he performed as a band leader.
Since he had a gospel upbringing, he had the opportunity to explore various genres of music since early on. What’s more, right from his early teens, he explored writing skills as well as learned different instruments. 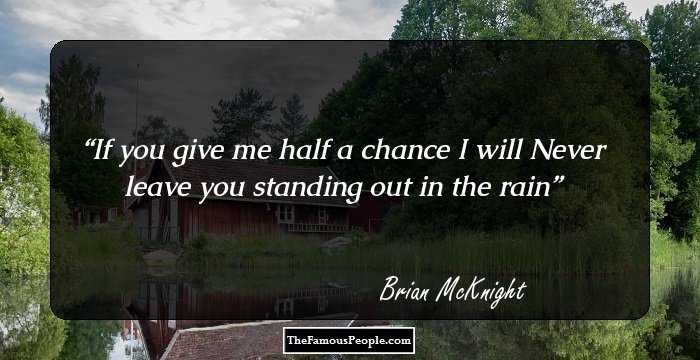 Quotes: You, Me, Never, Will, I
Continue Reading Below
You May Like

Radio Jockeys
Black Musicians
Black Soul Singers
Lyricists & Songwriters
Career
In 1990, when his brother signed a record deal with Warner Brothers for the band, Take 6, young McKnight was inspired to record his own. Eventually, by the time he aged 19, he recorded his own demo tapes which subsequently won him his first recording deal with Mercury Records subsidiary, Wing Records
He released his debut self-titled album, ‘Brian McKnight’ in 1992, which peaked at number 8 on the Billboard 200 chart. Though all the songs were well received by the audience, one which requires a special mention includes, ‘One Last Cry’.
The superlative success of his debut album led him being tagged as one of the most promising and upcoming singer-songwriters around. However, despite the buzz, his second album took quite some time and released only in 1995 titled, ‘I Remember You’.
He released one more album under Mercury Records titled ‘Anytime’ in 1997. The album garnered immense positive response, which is evident from the fact that it sold two million copies and received a Grammy award nomination!
In 1997, he came with the album, ‘Remember the Magic’ which celebrated Disney’s silver jubilee. Following year, he signed a deal with Motown Records and came up with a Christmas album, ‘Bethlehem’.
Year 1999 was the most successful year for this talented singer-songwriter during his active years as he released his most successful album till date, ‘Back At One’. The album was a major hit and went on to sell 3 million copies.
The success story continued as his 2001 released album, ‘Superhero’ was well received by the audience. With rock style music, the album had a long list of featured guests including Justin Timberlake, Nate Dogg and Nelly’s St Lunatics. The album secured five Grammy nominations,
His association with Mowtown Records lasted for six years until 2003. Same year, he released the album, ‘U Turn’. The album featured a ballad-styled collection.
Two years later, in 2005 he came up with the album, ‘Gemini’ which had a sexual tone in its lyrics. Meanwhile, he wrote lyrics for Guy Sebastian, Australian Soul artist for the song, ‘Wait’ in the album ‘Beautiful Life’.
Continue Reading Below
Singing and song writing apart, he hosted the show, ‘The Brian McKnight Morning Show’ with Pat Prescott on KTWV The Wave in Los Angeles, CA from 2006 until 2010. Additionally, in 2007, he made his debut in Broadway with the show, ‘Chicago’.
In 2009, he multi-tasked, first coming up with his album, ‘Evolution of a Man’, then hosting ‘The Brian McKnight Show’ on 98.7 KISS FM in New York and later on appearing in the second season of Celebrity Apprentice.
In 2011, he released the album, ‘Just Me’. All the songs in the album, excepting for one have been penned by him. His latest studio album is ‘More Than Words’ released in 2013. Produced by him, the album has contributions rom his two sons. 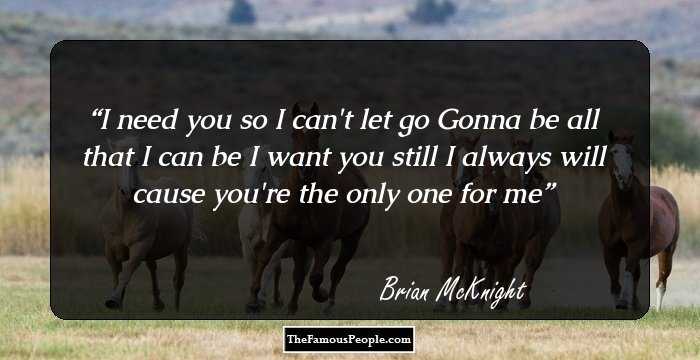 Quotes: You, Me, Will, Need, I
Recommended Lists:

Black Rhythm & Blues Singers
Black Lyricists & Songwriters
Black Film & Theater Personalities
American Men
Awards & Achievements
He has made an outstanding contribution in the field of music as an R&B artist, sixteen Grammy Award nominations in various categories standing as a testimony of the same.
He has twice been nominated in MTV Video Music Awards, once at BET Awards and once at American Music Awards.
He secured three nominations for Image Awards, eventually winning one in the category of Outstanding Male Artists for ‘Back At One’. Additionally he won one out of the four nominations at Soul Train Awards in the category of Best R&B Album for album ‘Anytime’. 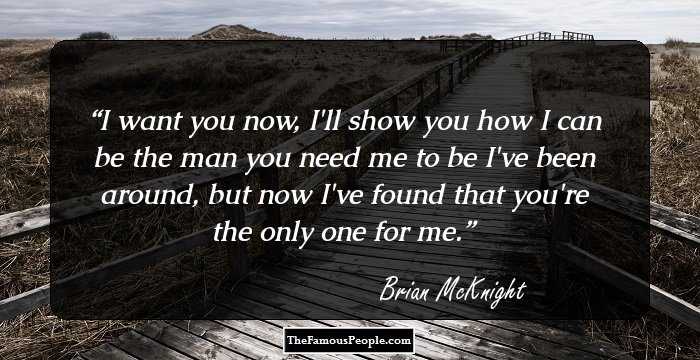 Quotes: You, Me, Need, I
Recommended Lists:

New Yorkers Actors
New Yorkers Musicians
Gemini Actors
Male Singers
Personal Life & Legacy
He went into the wedlock with Julie, who bore him two sons, Brian McKnight Jr and Cole Nicolas Niko McKnight. The couple however separated from her. His sons have made significant contribution in his latest released albums.
Religiously, he is a Seventh-day Adventist
Recommended Lists:

Gemini Singers
Male Musicians
American Actors
Gemini Musicians
Trivia
This American singer-songwriter and multi-instrumentalist of the ‘Back To One’ album fame have to his credit sixteen Grammy Award nominations without a win.
Recommended Lists:

See the events in life of Brian McKnight in Chronological Order