Brandy Norwood is a quintessential American R&B singer-songwriter, actress and record producer. She began her music career in her early teens and rose to fame with her first single ‘I Wanna Be Down’. Brandy was born in a family with musical background. She is the first cousin of the famous American rapper Snoop Dogg. Her self-titled debut album released in 1994 under the banner of ‘Atlantic Records’ and sold six million copies. Her performance in the sitcom ‘Moesha’ as the title character, earned her great applause. Her song ‘The Boy is Mine’ with Monica was acclaimed worldwide and eventually helped her second album. ‘Never Say Never’ bagged Brandy a ‘Grammy Award’, and was quickly followed by the success of two more albums – ‘Full Moon’ and ‘Afrodisiac’. Her latest album ‘Two Eleven’ released in 2012. She is all set to release her seventh studio album by 2018. Brandy also became a Broadway star with her debut performance in the John Kander musical ‘Chicago’. She has a line of Barbie dolls designed after her and is also listed as RIAA’s ‘Top Selling Artists’ in the US with over 10.5 million certified sold albums. American People
African American Singers
Actresses
Musicians
Pop Singers
Childhood & Early Life
Brandy Rayana Norwood was born on 11th February, 1979 to Christian parents, Willie Norwood and Sonja Bates in McComb, Mississippi. Her father was a popular gospel singer while her mother, Sonja, worked as a former district manager for ‘H&R Block’.
She grew up alongside her younger brother, William Ray Norwood Jr., who later became known as ‘Ray J’. Ray J showed the same interest in music as his sister did.
She first began singing along with her father in the church choir. Later in 1983, she relocated to Los Angeles, California, with her parents. There she attended the ‘Hollywood High Performing Arts Center.
She was spotted by Teaspoon Productions and was quickly made a backing vocalist for Chris Stokes and Earl Harris’ boy band ‘Immature’. Her parents then assisted her in signing a recording deal with ‘Atlantic Recoding Corporation’.
Her mother left a prolific job to spare time to manage Norwood. Thus, Brandy left school and studied with a home tutor. Before she commenced her music career, she played a secondary character in the ABC TV show ‘Thea’ which opened to much acclaim but after its initial ratings began to fizzle out, it was later cancelled. 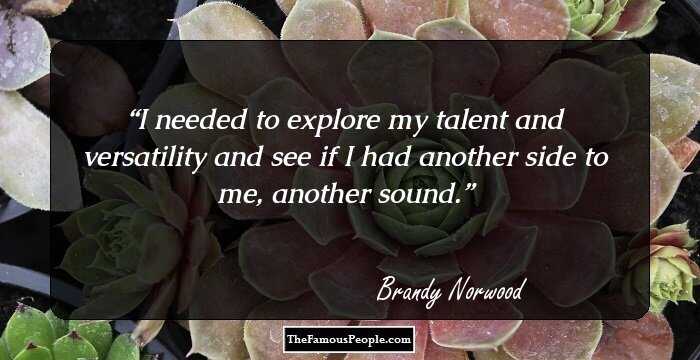 Continue Reading Below
Debut Album & TV Show �
Her debut album was crafted under the mentorship of Keith Crouch and the R&B Group ‘Somethin’ for the People’. The album was self-titled and comprised of a street-like breezy hip-hop edge to rhythm-and-blues.
The album ‘Brandy’ was launched in 1994 and did magnificently well. She booked the twentieth spot on the ‘U.S. Billboard 200’ chart. The album sold six million copies, with the singles ‘Baby’ and ‘I Wanna Be Down’ holding a place in the top 10 rankings of ‘Billboard Hot 100’.
She was the opening act at the ‘Boyz II Men’s’ national tour and even sang for the Hollywood movies ‘Batman Forever’ and ‘Waiting to Exhale’ in 1995.
In 1996, she starred in a main role in the sitcom ‘Moesha’. She worked alongside Sheryl Lee Ralph and William Allen Young in the teenage series. The show aired for six seasons and provided impetus for a spin-off titled ‘The Parkers’. 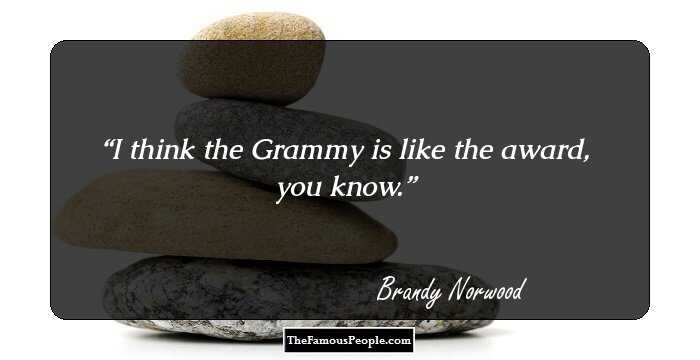 Quotes: Awards
From �
Her second album ‘Never Say Never’ released in 1998. The album’s duet ‘The Boy Is Mine’ became her first song to top the ‘U.S. Billboard Hot 100’. The same year she went on a world tour to promote her album.
By 2002 her third album ‘Full Moon’ was in music stores. It failed to garner as much success as her previous two albums. ‘Afrodisiac’ released in 2004 to much critical applause and managed to put her back amongst the best in the music industry.
With continuous success as a singer and actress, she became the first choice to judge the talent hunt show ‘America’s Got Talent’ alongside David Hasselhoff and Piers Morgan in its first season.
Simultaneously, she began work on her fifth album ‘Human’ under the label of ‘Epic Records’. The album’s lead single ‘Right Here (Departed)’ topped the ‘Hot Dance Club Play’ music chart.
Continue Reading Below
Sixth Studio Album & Recent Work
By 2011, she became a part of the comedy series ‘The game’ in which she played the recurring role of Chardonnay in the first season before becoming a regular on the show.
In October 2012, she launched her sixth studio album titled ‘Two Eleven’ and climbed to the number three spot on ‘U.S. Billboard 200’.
She returned to the big screen the following year in the movie ‘Temptation: Confessions of a Marriage Counselor’. The year 2014 was equally successful for her as she recorded a cover of Coldplay’s ‘Magic’ which topped the ‘Billboard Trending 140 Chart’.
She made her debut in the Broadway musical ‘Chicago’ in 2015. In the musical she played the lead character, Roxie Hart. Later in 2016, she played the lead role in the TV series ‘Zoe Ever After’, which she co-produced. The same year, she went on the Slayana World Tour, which was largely based in Europe.
In 2017, she participated in the cokking show ‘My Kitchen Rules’ where she competed with her younger sibling, Ray J. 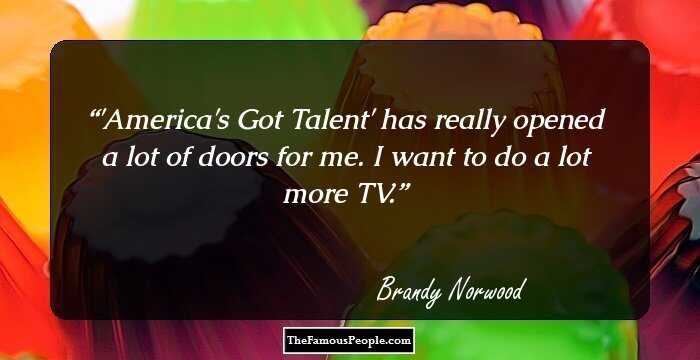 Quotes By Brandy Norwood | Quote Of The Day | Top 100 Quotes

See the events in life of Brandy Norwood in Chronological Order