Advanced Search
Brandi Williams is an American singer who was a part of the trio-girl-group 'Blaque'—also known as 'Blaque Ivory' outside of the United States—along with Shamari Fears and late Natina Reed. They rose to fame with their self-titled debut album that contained hit tracks like '808', 'Bring It All to Me', and 'I Do'. They have toured with boy-band 'N Sync and TLC's FanMail Tour in 1999. The group starred as cheerleaders in the 2000 film 'Bring It On'. Blaque fell apart in the latter half of the 2000s, and an attempt to regroup in 2012 was foiled by the untimely death of Natina Reed. Williams was the only member of the band to release a solo single, her slow jam 'Love It', in late 2011. American People
Rhythm & Blues Singers
American Women
Libra Singers
Women Singers
Rise to Stardom
Brandi Williams participated in various competitions in Atlanta as a solo artist with the stage name 'Danielle Foushe'. While she and her future band mate Shamari Fears were born in the same neighborhood in Detroit, they first met at a talent show in Atlanta while Fears was in her own group 'Intrigue'. The two immediately became friends and kept in touch. Fears was friends with Natina Reed, whom she had met in high school, and eventually decided to join Reed's group 'Blaque'. Shortly after, Williams also joined the group as the third and the youngest member.
Around this time Reed had a meeting with Ronald Lopes, the brother of Lisa 'Left Eye' Lopes of TLC, while singing jingles to earn extra cash. He introduced her to his sister, who signed the group to her production company, Left Eye Productions. In 1997, the group made a cameo appearance in Lil' Kim's video 'Not Tonight (Remix)'. The following year, with Lisa Lopes as their mentor, the group released their self-titled debut album which was certified platinum by RIAA. The lead single, '808', reached No.8 on the 'Billboard Hot 100' singles chart and was gold certified, and the second track 'Bring It All to Me' peaked at No.5 on the same chart.
Later Career
Following the success of their debut album, Brandi Williams and her band-mates appeared in the 2000 film 'Bring It On' as members of the East Compton Clovers cheerleading squad and recorded the Shelly Peiken and Guy Roche song 'As If' for its soundtrack. Their song 'Bring It All To Me', remixed by rapper 50 Cent, also appeared in the film. Williams subsequently appeared as herself in the 2001 movie 'On the Line'. Their second album 'Blaque Out' was initially shelved after the band was dropped from Columbia Records, but soon it was leaked online.
An alternate version of the album was briefly released on iTunes in 2007, before being re-released in 2011. Their intended third album 'Torch' was not released either, but the song 'I'm Good' featured on the soundtrack for the 2003 film 'Honey'. During this time, Williams signed a new record deal and started working on a solo album, and also provided vocals on the hook of Nelly's single 'Grillz'. Blaque worked together sporadically in 2005-09 on their fourth studio album 'Private Show', but the album remained unreleased, and four songs from it were uploaded on YouTube later. They reunited for the Left Eye Music Festival in July 2012, but officially broke up after Natina Reed died in a car accident on October 26, 2012.
Family & Personal Life
Brandi Danielle Williams was born on October 5, 1982 in Detroit, Michigan, United States. Her father, Danny C. Williams, was a member of 'Rick, Ran & Dan', a men’s vocal group based out of Detroit. Her grandfather, Bobby Rogers, was a member of the legendary Motown group 'Smokey Robinson and The Miracles'. She is the niece of popular mid-1980s R&B singer Cheryl Anne Norton, better known by her stage name Cherrelle and for the song 'I Didn’t Mean to Turn You On'. The family later relocated to Atlanta, Georgia, where her siblings were born. She has a younger brother named Lil Wop, who is a rapper who also goes by the moniker 'The Wopster'. Her younger sister Kodie Shane is also a rapper and singer, whom their mother Hope manages. Her cousin, popularly known as 'Famous Dex' or 'Black Migo Dex', is a drill rapper.
Relationships
Brandi Williams first met entrepreneur and private club owner Jason Harris inside her stepfather’s house, where he was visiting as a friend. Jason fell in love with Brandi at the first sight, and while she was also drawn to him, she could not reciprocate at the time because she was involved in a relationship. They eventually began dating in late 2006 and got engaged on Valentine's Day 2007 after he proposed to her. They finally got married on May 23, 2009 in a southern backyard ceremony in Lithonia, Georgia.

See the events in life of Brandi Williams in Chronological Order 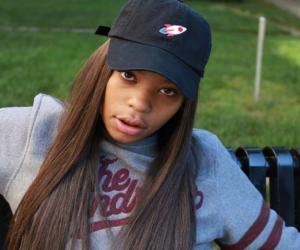