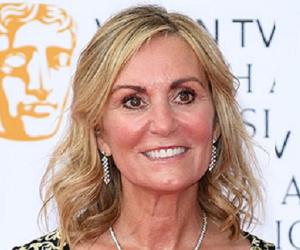 Bradley Walsh is a well-known known British actor and presenter. He is most recognised for his acting in television shows Coronation Street, Law & Order: UK and Doctor Who as well as presenting the game show The Chase. Earlier Walsh was an aspiring football player whose promising career came to an end after an injury. He then performed as a comedian and later made a foray into television as a presenter and an actor and did extensive work in both capacities. Some of his other notable works as a presenter include Wheel of Fortune, Odd One In, Keep It in the Family and Cash Trapped. Television work aside, he has done plenty of theatre work, specifically pantomimes like Aladdin, Peter Pan and Cinderella. At the age of 56, he released his debut music album, Chasing Dreams, followed by another one - When You're Smiling - the next year. During his career, he has also worked on radio sitcoms and even had his own radio show for a couple of years. Bradley Walsh was born to Margaret Walsh and Daniel Walsh on 4th June 1960, in Watford, Hertfordshire. He has a sister Kerri.

He spent his early days in Leavesden near Watford and studied at Francis Combe Academy. He was a mischievous student but was also highly popular.

Bradley Walsh joined Rolls-Royce's aircraft engine factory as an apprentice after he left school at the age of sixteen.

He was also a keen sportsman and played football. His skills as a footballer were recognised by a talent scout and he was signed up by Brentford FC. He was a part of the reserve squad. Unfortunately, though, his promising career as a footballer came to a halt after he hurt his ankles in the year 1982.

A variety of jobs followed this including working as a bluecoat at Pontins in Morecambe for three months and doing stand-up comedy at clubs. He also participated in a comedy talent contest and ranked second.

He was spotted performing in Blackpool and was invited to Des O'Connor Tonight (1991) show. He then began performing at the Royal Albert Hall and later at The Royal Variety Show (1993).

Thereafter, he became a television presenter of The National Lottery (1994), Midas Touch (1995) and the British version of the US game show Wheel of Fortune (1997).

In 1998, he starred in a critically acclaimed radio sitcom King of the Road where he played Trevor King. The sitcom ran for two series.

Bradley Walsh soon decided to expand his television profile and turned his focus towards acting. His first role was a minor one in the Channel 4 series, Lock, Stock...(2000).

In 2001 and 2002, he hosted his own radio show - Breakfast With Brad On Capital Gold -across The Capital Gold Network.

A few more acting assignments followed before he landed his first regular role in the television shows Night & Day (2002-2003) and later Coronation Street (2004-2006).

His portrayal of the lovable rogue Danny Baldwin in the latter not only made him a household name but also earned him the 2006 British Soap Award for Best Dramatic Performance and 2006 TV Quick Awards for Best Soap actor.

In October 2007, he acted in ITV’s three-part original drama series Torn and in 2008 appeared in a couple of episodes of The Sarah Jane Adventures, a spin off show of BBC’s long running science fiction show Doctor Who.

Bradley Walsh’s career as a presenter flourished simultaneously. He presented countdown 50 Greatest Stars Polls and No. 1 Soap Fan in 2007 and My Little Soldier and Spin Star in 2008.

In 2009, he landed an important presenting role of his career in game show The Chase. The show has aired 14 series till 2020 with more than thousand episode and is hugely popular.

In 2009 again, he was signed to play DS Ronnie Brooks in ITV crime drama Law & Order: UK. He continued with the show till 2014 and acted in 53 episodes. The role once again won him a lot of appreciation and nominations at award functions.

In 2014 itself, he acted in BBC One comedy series SunTrap and also presented an episode of Tonight at the London Palladium.

In 2016-2017, he presented two series of Tonight at the London Palladium. The year 2016 also saw him begin hosting yet another game show Cash Trapped which aired three series till 2019.

In 2016 again, he made his singing debut by releasing his album Chasing Dreams which climbed to the 10th spot of UK Albums Chart. The following year, his second album When You're Smiling released and peaked 11th on the charts.

Between 2015 and 2017, he was a regular soccer aid player and team captain on sports panel show Play to the Whistle.

In 2018, he played Harry Priest in the BBC Radio 2’s sitcom pilot The World According to Harry Priest.

In 2019, he began appearing in a coming-of-age road trip series – Bradley Walsh & Son: Breaking Dad – along with his son Barney Walsh. The second series was aired in 2020.

Walsh has been pretty active in the theatre and pantomime circuit as well. The various pantomime that he has been a part of over the years include Peter Pan (as Smee), Cinderella (as Buttons), Aladdin (as Wishee Washee), Dick Whittington (as Dick) and Snow White (as Muddles).

He has also hosted other television series, award shows, documentaries and specials. These include television movie documentary When Dummies Took Over the World (2018) and The London Palladium: The Greatest Stage on Earth (2018).

Bradley Walsh has been married to Donna Derby, former professional dancer and currently a choreographer since 1997 and the couple have a son named Barney Walsh.

Bradley Walsh also has a daughter, Hayley, from an earlier relationship.

See the events in life of Bradley Walsh in Chronological Order