A multi-talented personality, Bob Uecker enjoys a special place in the world of baseball. Starting off his career as a baseball player, he soon grew up to serve as a baseball commentator, television host, wrestling ringside announcer, comedian and a television and film actor. With his exceptionally talented self, spirited personality and likeable nature, he has earned himself a lot of popularity and fan base amongst the audience. However, what is interesting to note is that much unlike other players, Uecker became more famous and recognized as a commentator and actor than as a player. In fact, his playing career remains undistinguished despite playing with several Major League baseball teams. It was in 1970s that he revamped his otherwise flagging career by launching himself as a sportcaster. He has since 1971 been serving as the play-by-play announcer for Milwaukee Brewersradio broadcasts. Furthermore, he has also provided commentary for the ABC’s show, Monday Night Baseball and later for a NBC’s show. As far as his acting career is concerned, he has done cameo appearances and guest roles in several films and television series. American People
Tall Celebrities
Tall Male Celebrities
Male Sportspersons
American Sportspersons
Childhood & Early Life
There is almost no information about the childhood, education and early life of Bob Uecker except the fact that he was born and brought up in Milwaukee, Wisconsin.
Since an early age, young Uecker was a minor league baseball fan and wanted to pursue the same professionally. He grew up watching the matches of Milwaukee Brewers in Borchert Field. 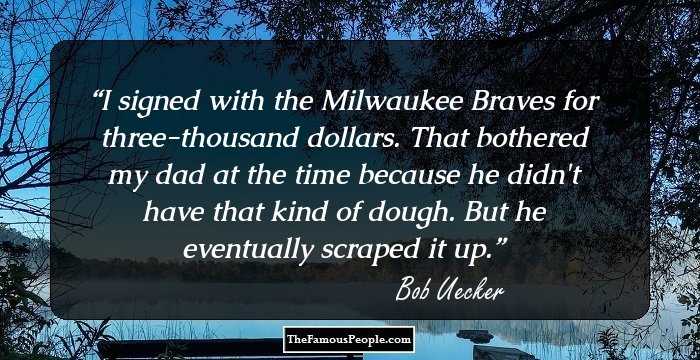 Quotes: Time, I
Continue Reading Below
You May Like

The Sexiest Men Of 2020, Ranked
Career
He made his debut in 1956 with the hometown club team, Milwaukee Brewers as their catcher.
Not exceptionally good with the game, he was a mediocre hitter with a batting average of .200. A defensive player, he completed his career with a fielding percentage of .981.
He played for a total of six seasons, concluding his career in the year 1967. Apart from playing for the Brewers, he did stints for St Louis Cardinals and Philadelphia Phillies.
Retiring from active baseball, he moved back to Milwaukee Brewers to re-launch himself as a sports caster. The following year, he started calling play-by-play for the Milwaukee Brewers' radio broadcasts, the profile which he continues to hold till date.
Simultaneously, he also served as the running commentator for televised games of Major League Baseball. In the 1970s, he worked for the ABC’s Monday Night Baseball, while in the 1990s he worked for NBCs.
Furthermore, apart from his on-air gimmicks as a commentator, he also provided commentary for several League Championship Series and World Series.
In 1987, he served as a ring announcer for pay-per-view's main event of Hulk Hogan versus Andr� the Giant in WrestleMania III. The following year, he appeared in WrestleMania IV yet again, not just a ringside announcer but as a backstage interviewer as well.
He did not limit his career as a commentator only and instead moved beyond boundaries to serve as the host for various television shows, including Bob Uecker’s Wacky World of Sports and Bob Uecker’s War of the Stars.
He also appeared in a series of commercials for the Milwaukee Admirals of the American Hockey League in the 1990s. He even designed the uniform for the team which they later wore for a match and then auctioned the same for a charity.
Continue Reading Below
He even made guest appearances on other shows such as Johnny Carson’s Tonight Show and a number of humorous commercials for various products including the Miller Lite Beer.
Other than hosting television shows, he even took up acting projects. In 1980s, he played the character of George Owens, a sportswriter cum father in the sitcom, Mr Belvedere.
He starred in guest roles in a couple of more television sitcoms including ‘Who's the Boss?’, ‘D.C. Follies’, and ‘LateLine’. Furthermore, he made cameo appearances in films such as ‘O.C. and Stiggs’ and ‘Fatal Instinct’ and starred in the role of Harry Doyle, broadcaster of Cleveland Indians in the Major League film trilogy.
He made his presence felt in the world of books as well by penning two books - an autobiography, ‘Catcher in the Wry’ and ‘Catch 222’.
Awards & Achievements
Till date, he has been named as the Wisconsin Sportscaster of the Year by the National Sportscasters and Sportswriters Association for the years 1977, 1979, 1981, 1982 and 1987.
In 2001, he was inducted into the National Radio Hall of Fame.
In 2003, he was presented with the annual Ford C. Frick Award,by the Baseball Hall of Fame for his relentless contribution as a broadcaster to baseball.
It was on the grand occasion of celebrating his golden jubilee in professional baseball that Milwaukee Brewers placed a number 50 in his honor in their ‘Ring of Honor’, near the retired numbers of Robin Yount and Paul Molitor.
In 2009, he was one of the sporting legends to be named in the Braves Wall of Honor inside Miller Park.
In 2010, he was inducted in the WWE Hall of Fame Class of 2010 for his appearance in Wrestlemania III and Wrestlemania IV
In 2011, he was inducted into the National Sportscasters and Sportswriters Association Hall of Fame.
He has a bronze statue of himself erected outside the Miller Park by Milwaukee Brewers on August 31, 2012.
Bob married Judy in 1976 in Louisiana and their marriage came to end end in 2001 through a divorce. The couple have 4 children - Steve, Leann, Sue Ann, and Bob Jr.
In April 2010, he suffered from health issues pertaining to the heart. He underwent a heart surgery in which his aortic valve and a portion of his aortic root were successfully replaced.
Trivia
Since 1971, he has served as the play by play announcer of the Milwaukee Brewers radio broadcasts
You May Like

See the events in life of Bob Uecker in Chronological Order