(Singer & Actress Known for her Chart Hits 'The Rose', 'Wind Beneath My Wings' and the Movie 'The Rose')

Winner of Grammy and Golden Globe Awards, Bette Midler is an American singer-songwriter, actress and entrepreneur. One of the bestselling female singers, her albums have sold over 30 million copies worldwide. She rose from very a humble beginning - from being a cabaret dancer at a gay bathhouse, she went on to become one of the most successful singers in the music industry. In a career spanning over a period of several decades, Midler, a multi-talented personality, has earned great appreciation in film and television industry. She has also appeared on several Broadway shows and is also a composer and songwriter. With an estimated net worth of $200 million, Midler has established herself as one of the most successful and highly paid personalities in the entertainment business. Some of her well-known albums include her debut album ‘The Divine Miss M’, ‘Bette Midler’, ‘Some People's Lives’, ‘Songs for the New Depression’ and ‘Thighs and Whispers’. She starred in the Golden Globe Award-winning film, ‘For the Boys’ and also in the acclaimed television series, ‘Gypsy’. education: University Of Hawaiʻi At Mānoa

American People
Pop Singers
American Women
Hawaii Actresses
Women Singers
Childhood & Early Life
Bette Midler was born in Honolulu, Hawaii to Jewish parents—Fred Midler and Ruth Midler, a housewife and seamstress.
She grew up in the neighbourhood of Aiea, in Honolulu, Hawaii, where she studied at the Radford High School. After high school, she attended the University of Hawaii but dropped out after three semesters. 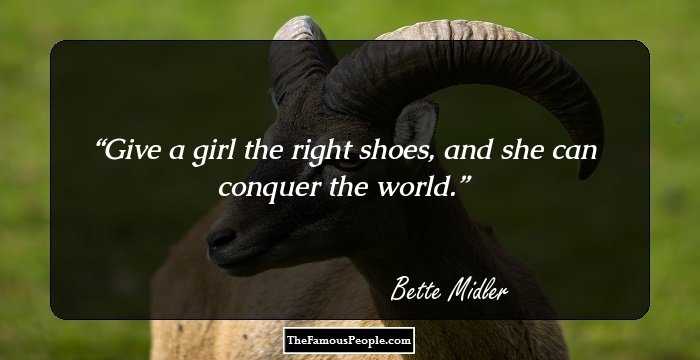 Continue Reading Below
Career
In 1965, she shifted to New York City and made her debut on stage with American playwright and theatre director Tom Eyen’s Off-Off-Broadway plays— ‘Miss Nefertiti Regrets’ and ‘Cinderella Revisited’.
She played the unaccredited role of a background actor, ‘Miss David Buff’ in the 1966 American film, ‘Hawaii’, a role which helped her earn money to relocate from Hawaii to New York.
From 1966 to 1969, she became acquainted with the Broadway style of acting and appeared on the Broadway show ‘Fiddler on the Roof’ and the Off-Broadway rock musical, ‘Salvation’.
In 1970, she gained attention while singing at ‘The Continental Baths’, a gay bathhouse located in New York City. It was here that she attracted numerous guests and gathered a huge fan following.
In 1972, her debut album ‘The Divine Miss M’ was released by Atlantic Records. The album featured the singles ‘Boogie Woogie Bugle Boy’, ‘Chapel of Love’, ‘Do You Want to Dance?’, ‘Hello In There’ and ‘Friends’.
In 1973, she came out with her second album, a self-titled compilation, ‘Bette Midler’, which was released by the Atlantic Records and was produced by Arif Mardin and Barry Manilow.
In 1976, she came out with her third album titled ‘Songs for the New Depression’, which peaked at the 27th position on the ‘Billboard 200’. With this album she made her first attempt at composing.
In 1977, her fourth studio album named ‘Broken Blossom’ was released. The same year she was also seen on the Emmy Award winning television special, ‘Ol' Red Hair is Back’.
In 1979, her fifth studio album ‘Thighs and Whispers’ was released and the same year she played the role of ‘Mary Rose Foster’ in the Academy Award nominated musical drama film, ‘The Rose’.
Continue Reading Below
In 1980, she starred in the concert film titled ‘Divine Madness’, which was based on her 1979 concert, held at the Pasadena's Civic Auditorium. The film also featured her attempt at stand-up comedy.
In 1983, her sixth album titled ‘No Frills’ was released. The album featured the singles ‘All I Need to Know’, ‘Favourite Waste of Time’ and ‘Beast of Burden’.
In 1986, she played the role of ‘Barbara Whiteman’ in the comedy film ‘Down and Out in Beverly Hills’, directed by Paul Mazursky. That year she was also seen in the comedy movie, ‘Ruthless People’.
In 1987, she played the role of ‘Sandy Brozinsky’ in the Golden Globe nominated movie ‘Outrageous Fortune’, directed by Arthur Hiller. The film was a commercial success.
In 1990, she came out with her seventh studio album ‘Some People's Lives’. The album was released under the Atlantic Records label and featured one of her most popular hit singles ‘From a Distance’.
In 1991, she appeared in the Golden Globe winning film ‘For the Boys’ and played the role of ‘Deborah Fifer’ in the film ‘Scenes from a Mall’. The following year, she was seen on the ‘The Tonight Show Starring Johnny Carson’.
In 1993, she appeared in the Golden Globe Award winning film ‘Gypsy’, in which she played the role of ‘Mama Rose’. The same year she also appeared in the film ‘Hocus Pocus’.
In 1995, her eighth album ‘Bette of Roses’ was released. The album received mixed critical reviews but was an immense commercial success. That year, she was also seen in the film ‘Get Shorty’.
In 1997, she was seen on the TV special ‘Diva Las Vegas’ and played a part in the sitcom ‘The Nanny’. That year, she also acted in the romantic comedy film ‘That Old Feeling’.
Continue Reading Below
In 1998, she came out with her ninth studio album titled ‘Bathhouse Betty’, which was a reasonably successful album. The album featured the singles ‘That's How Love Moves’, ‘My One True Friend’ and ‘I'm Beautiful’.
Released in the year 2000, her album ‘Bette’ was released under the label of Warner Bros. Records. The album featured the singles ‘Nobody Else But You’ and ‘In These Shoes’.
In 2003, her album ‘Bette Midler Sings the Rosemary Clooney Songbook’ was released. It was nominated for Grammy Award and album featured the hit single ‘White Christmas’ and was dedicated to singer Rosemary Clooney, who died the previous year.
In 2005, her album titled ‘Bette Midler Sings the Peggy Lee Songbook’ was released. The following year, she came out with the holiday themed album ‘Cool Yule’, which featured many Christmas melodies.
In 2012, she acted in the family comedy film ‘Parental Guidance’, which was directed by Andy Fickman. 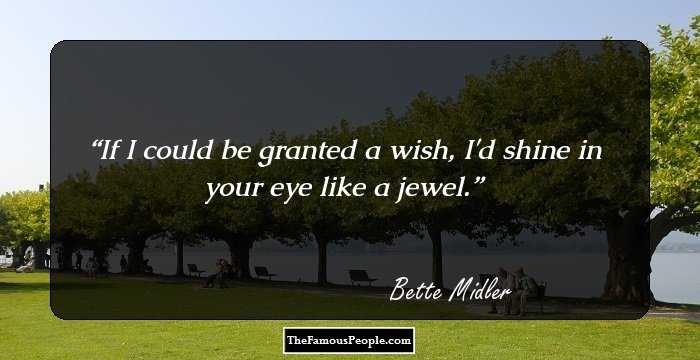 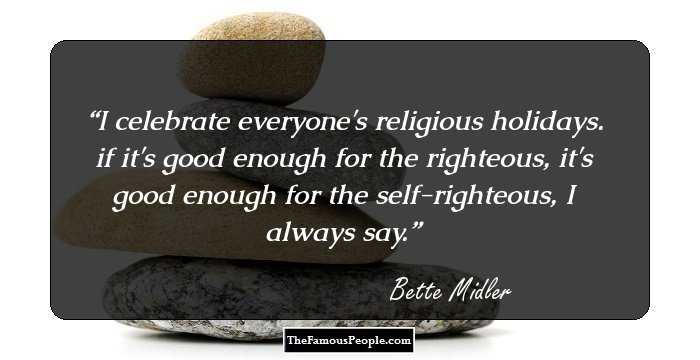 Quotes: I
Trivia
This Golden Globe winning singer and actress was named after the celebrated 1940s actress, Bette Davis.

Quotes By Bette Midler | Quote Of The Day | Top 100 Quotes

See the events in life of Bette Midler in Chronological Order