Benjamin Cardozo was an eminent American jurist who contributed significantly towards the development of ‘common law’ in United States. He was the second Jew to serve on the nation’s highest court and became a Supreme Court justice without a law degree. After dropping out from the law school, he joined his father's firm and entered the bar where he earned an excellent reputation. Later on he was admitted to the New York bar and became a highly successful courtroom lawyer despite his mild, reserved manner. Elected to the state Supreme Court as a reform candidate in 1913, he was elevated a few weeks after his arrival to the Court of Appeals, the highest court in New York. He stayed there until 1932, having become the chief justice in 1927, and was later appointed the Associate Justice of Supreme Court. He made some notable rulings throughout his career including the cases of ‘Palsgraf vs. Long Island Railroad’ and ‘Mac Pherson vs. Buick Motor Co.’ which placed him in the pantheon of eminent justices. A deeply private man known for his gentle, friendly demeanor and loved by his colleagues, he remained a bachelor all his life. As a jurist and a committed Jew, he brought honor to the United States and to his people, and his writings and opinions contributed greatly towards the evolution of American ‘common law’. Sonia Sotomayor
DID WE MISS SOMEONE?
CLICK HERE AND TELL US
WE'LL MAKE SURE
THEY'RE HERE A.S.A.P
Quick Facts

American Celebrities
Columbia College
American Judges
American Lawyers & Judges
Gemini Men
Childhood & Early Life
He was born on May 24, 1870, in New York City, to Albert Jacob Cardozo, a judge on the Supreme Court of New York, and his wife, Rebecca Washington Nathan. His grandparents from both sides were Sephardi Jews of the Portuguese Jewish community.
In 1868, Albert was implicated in a judicial corruption scandal and resigned from the bench under the threat of impeachment. After leaving the court, Albert practiced law for several more years until his death in 1885.
He was one of the six children of his parents, including an elder sister, Nell, and a twin sister, Emily. In 1879, his mother died and thereafter, the twins were raised during much of their childhood by Nell, who was 11 years older.
He received his early education privately from writer Horatio Alger, a prolific author of 19th century. At the age of 15, he got enrolled at the Columbia University and graduated in 1889. Then he attended the Columbia Law School in a two-year law program.
In the midst of his studies, however, the faculty extended the program to three years. He declined to stay for an extra year, and thus left law school without a law degree. In 1891, he passed the bar and began practicing appellate law alongside his older brother. 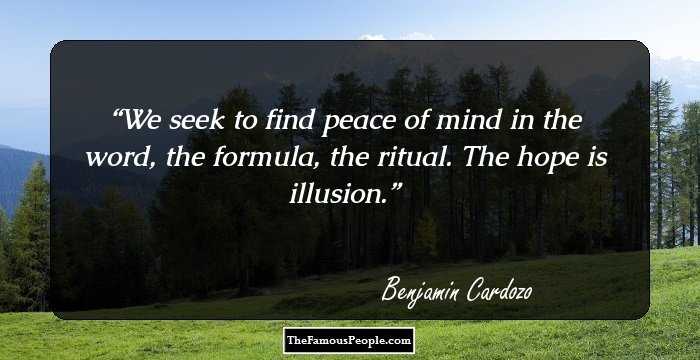 Quotes: Peace, Hope
Continue Reading Below
Career
In November 1913, he was appointed on a 14-year term to the New York Supreme Court, and took office on January 1, 1914. But only a few weeks later, he was selected to become a temporary judge for the New York Court of Appeals.
In February 1914, under the Amendment of 1899, he was chosen to the New York Court of Appeals, and reportedly became the first Jew to serve on the Court of Appeals.
In January 1917, he was designated a regular seat on the Court of Appeals and in November 1917, he was elected on the Democratic and Republican tickets to a 14-year term on the Court of Appeals.
In 1926, he was elected to a 14-year term as Chief Judge on the Court of Appeals and he assumed office on January 1, 1927. He served as the chief judge for five years and resigned in March 1932 to accept an appointment in the United States Supreme Court.
In March 1932, he was appointed as the Associate Justice of the United States Supreme Court by President Herbert Hoover. He served on the bench for six years, supporting much of President Franklin D. Roosevelt's New Deal initiatives, including Social Security programs, and helping shape the direction of criminal law.
In addition to being a judge, he was a co-founder of the ‘American Law Institute’ and served on the board of the ‘American Jewish Committee’. He was also a published author with notable works detailing his philosophies on the law, including ‘The Nature of the Judicial Process’ (1921) and ‘Law and Literature’ (1931). 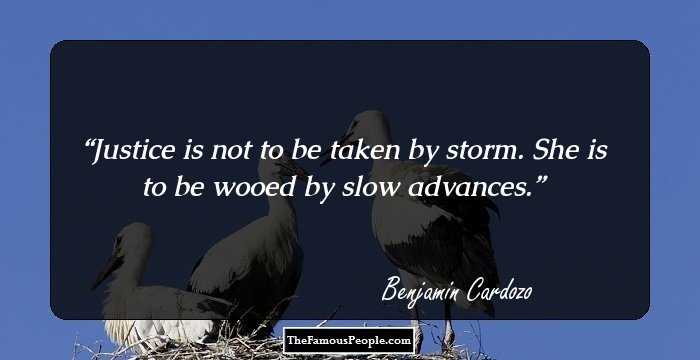 Major Works
His time with the Court of Appeals was lauded for the caliber of its jurisprudence. He was a key figure in the 1916 automobile case of Macpherson v. Buick Motor Co.; the judgement of the case issued a pioneering ruling in issues concerning individual consumers and product liability. His decision in Palsgraf v. Long Island Railroad Co. (1928) helped to redefine the concept of negligence in American tort law.
In his years as an Associate Justice, he handed down opinions that stressed the necessity for the tightest adherence to the Tenth Amendment. He wrote a majority opinion for Helvering v. Davis, 301 U.S. 619, and other Social Security cases (1937), upholding the federal Social Security program on the basis of the general welfare provision of the United States Constitution (Article I, section 8).
Personal Life & Legacy
He voluntarily chose to remain unmarried and led a celibate life. One of the supposed reasons behind this decision was his lifelong devotion towards his older sister Nell, with whom he lived in New York until her death in 1929.
He died on July 9, 1938, in Port Chester, New York, at the age of 68. His body was buried in Beth Olam Cemetery, Queens, New York.

See the events in life of Benjamin Cardozo in Chronological Order