(One of the Leading Entertainers of the 20th Century)

Advanced Search
Jack Benny, born as Benjamin Kubelsky, was an American comedian, vaudevillian, and actor. He was one of the most famous names in show business for more than 50 years and was an eminent star of radio, the stage and screen. He started out as a serious musician, before he discovered he could make people laugh. He received nationwide acclaim in the 1930s as a result of his weekly radio show ‘The Jack Benny Program’ which became a forerunner of the sitcom genre. His program was among the most popular shows on American radio, and later on television. He was one of the first comedians who was willing to let other people share some of the laughs. He rarely made jokes that hurt other people; instead he would let the other actors make fun of him. He also appeared in several Hollywood movies during his outstanding career as a comedian. He continued to perform and did a few television specials after his weekly series ended. He was one of America's best-loved funnymen during the 20th century and remained one of the top stars of radio, television, and stage throughout his career.

American Celebrities
American Men
Male Comedians
American Comedians
American Film & Theater Personalities
Childhood & Early Life
He was born on February 14, 1894 in Chicago, Illinois, U.S., to Meyer Kubelsky, a Jewish saloon owner, and his wife, Emma Sachs Kubelsky. His parents were immigrants to America from different countries.
At the age of six, he started studying violin from his neighbor Otto Graham Sr. Jack Benny was poor at academics and was ultimately expelled from high school. He also failed in business schools and in attempts to join his father's business.
In his teenage years, he started playing the violin in local vaudeville theaters for $7.50 a week. He also struck a long friendship with the Marx Brothers, especially Zeppo Marx, while performing in the theatres. 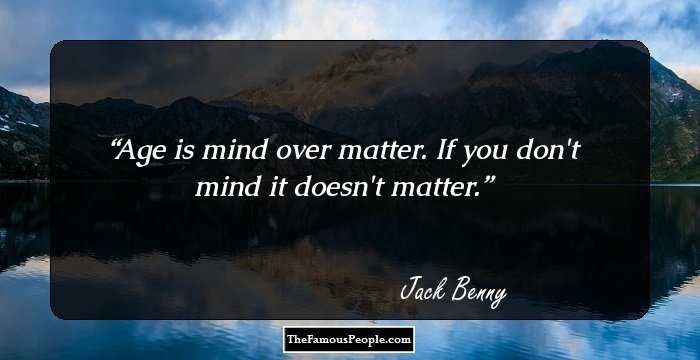 Quotes: You
Continue Reading Below
Career
In 1917, during the World War I, he left the artistic career to join the U.S. Navy and often entertained the troops with his violin playing. In one of his shows, he was applauded more for his funny jokes than for his violin play which made him realize that he was destined to become a comedian.
From 1920 to 1930, he remained a vaudeville performer and acted in several movies such as ‘The Hollywood Revue of 1929’ (1929) and ‘Chasing Rainbows’ (1930). He was a monologist and skit performer in a Broadway revue called ‘The Vanities of 1930’.
In 1932, the turning point in his life arrived when he was invited on Ed Sullivan's radio program. His spontaneity and wittiness on radio received immediate recognition and he was commissioned as the face of a new radio show titled ‘The Jack Benny Program’. It was a weekly radio show that aired from 1932 to 1948 on NBC and from 1949 to 1955 on CBS.
In 1950, he appeared on the television version of his famous radio show. It was one of the most popular programs on television throughout the 1950s and became a weekly television show by 1960. The show was cancelled in 1965, after being on air for 32 consecutive years. After the show ended, he continued to perform and did a few television specials in his later years.
Along with his absorbing career on stage, radio, and television, he also appeared in many Hollywood movies. Some of the films he acted in were ‘It's in the Air’ (1935), ‘Man About Town’ (1939), ‘Buck Benny Rides Again’ (1940), ‘Charley's Aunt’ (1941),‘George Washington Slept Here’ (1942), ‘To Be Or Not To Be’ (1942) and ‘The Horn Blows at Midnight’ (1945). 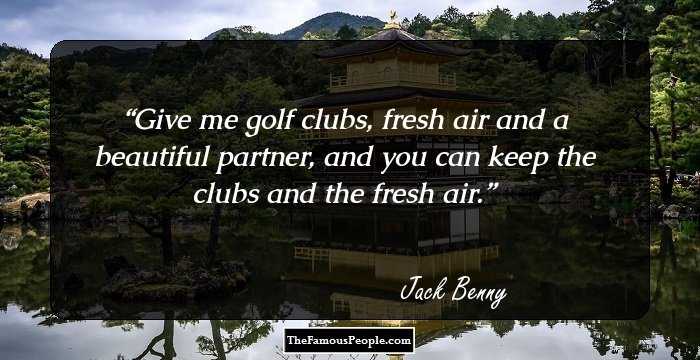 Quotes: You, Me, Beautiful
Major Works
One of his most substantial works was the regular radio show ‘The Jack Benny Program’ which often comprised of a loose collection of skits. Through his comic timing and tickling madness, he succeeded in amusing the whole country for decades through his radio program from 1932 to 1955.
After his show was adapted for television, he developed new gestures to engage and entertain audiences such as the mincing walk, the famous hand on the cheek, and his mock-pathetic stare. His television show aired for almost 15 years gaining a large following and established him as one of the greatest artists of the era.
Awards & Achievements
In 1958, he received the ‘Golden Globe for Best TV Show’ for his show ‘The Jack Benny Program’.
In 1957 and 1959, he was awarded the ‘Primetime Emmy Award for Outstanding Lead Actor in a Comedy Series’.
He was conferred one star each on the Hollywood Walk of Fame for TV, film, and radio. In 1988, he was inducted into the Television Hall of Fame. 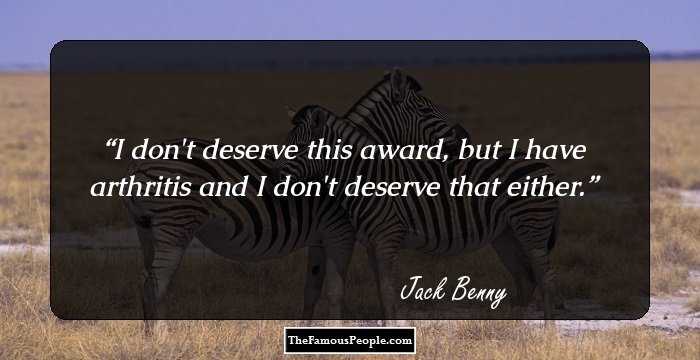 Quotes: I
Personal Life & Legacy
On February 24, 1927, he married Sadie Marks, a sales girl from the May Company store in Los Angeles. Sadie soon became part of his traveling show and worked along with him by the stage name of Mary Livingstone. Later, the couple adopted a girl, Joan Naomi.
In late 1974, he was diagnosed with pancreatic cancer after he complained of stomach pains. He died on December 26, 1974 in Bel Air, Los Angeles, California, U.S., at the age of 80. He was interred in a crypt at Hillside Memorial Park Cemetery, Culver City, California.

See the events in life of Jack Benny in Chronological Order