Advanced Search
Even though he retired unexpectedly and quit early in his career, Barry Sanders is regarded as one of the finest American football players of the National Football League in the last decade. After being rejected by several colleges because of his height, Sanders finally joined Oklahoma State on a sports scholarship. He then got picked up by the Detroit Lions for National Football League (NFL) with whom he spent his entire football career. It was not long before Sanders became famous for his electrifying running style, and became the first player to have reached a record of 1,000 yards for first 10 seasons. It was only a matter of time before Sanders became one of the crucial players for the Detroit Lions leading NFL four times in his record breaking ‘rushing’. He has broken several major records and has also been bestowed with several prestigious awards. Sanders retired from football suddenly, raising a controversy around his abrupt decision. He clarified later that he held the Detroit Lions too close to him to have been replaced from his position. After an amazing football career, Sanders passed on the baton to his son Barry J. Sanders. Peyton Manning
16th July In History
DID WE MISS SOMEONE?
CLICK HERE AND TELL US
WE'LL MAKE SURE
THEY'RE HERE A.S.A.P
Quick Facts

American People
Male Sportspersons
American Sportspersons
American Football
Cancer Men
Childhood & Early Life
Barry Sanders was born to William, a carpenter and Shirley who was a nurse. He belonged to a big family and had two brothers and eight sisters.
Sanders hailed from Wichita, Kansas and completed his schooling from Wichita North High School.
Even after winning all-state honours, Sanders was not offered too many scholarships except two, because of his short height. He was finally offered sports scholarships by Emporia State, Tulsa and Oklahoma State University. 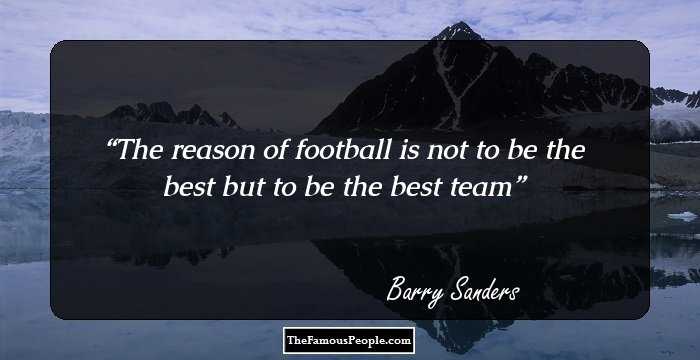 Continue Reading Below
Career
From 1986-1988, he played for the Oklahoma State Cowboys backing up ‘All American Thurman Thomas’ only to take his place when Thomas moved on to NFL.
In 1989, he was selected by the Detroit Lions in the NFL draft and was presented the number 20 jersey, which was worn by some of the most famous players like, Billy Sims and Lern Barney.
Sanders featured on the Lion team as quarter back, with the team making playoffs for five years in the 1990s.
In 1991 and 1993, Sanders was the member of the squad that won the NFC Central division title.
In 1994, he was named NFL’s ‘Offensive Player of the Year’ and scored a combined 2,166 yards for the season.
The following year, Sanders beat his own total by posting 1,500 yards with 398 receiving yards. However, in 1996, he reached a career low with 147 receiving yards.
The year 1997 was Sander’s best season by far as he secured a place in the ‘2000 rushing yards club’. He is the third player after O. J. Simpson to do so in a single season and also the first running back to rush for 1,500 yards in five seasons and the only one to do it for four consecutive years.
Sander’s last NFL season was in 1998. He broke his five year streak of rushing over 1500 yards, by rushing only for 1491 yards this season.
In 1999, he announced his unexpected and controversial retirement from pro football. By now, he had gained 15,269 rushing yards, 2,921 receiving yards, and 109 touchdowns (99 rushing and 10 receiving). He finally admitted that Lion’s failure was the reason behind his retirement.
Continue Reading Below
Awards & Achievements
He is among the few pro football players holding 34 NCAA records in his illustrious football career.
In 1988, he led the nation and was a part of the greatest season in American football history. He not only created the national college single-season rushing record with 2,628 rushing yards but also won the ‘Heisman Trophy’.
He was selected by Sporting News as NFL Rookie of the year for the next two consecutive years.
Sander’s was first- or second-team All-Pro and was selected to the Pro Bowl every year from 1989 through 1998.
In 1991, he was given the title of ‘NFC Most Valuable Player’ by NFL Players Association.
He was ‘Player of the Year’ for Sporting News in 1997.
He has also been ranked #2 in ESPN's list of the ‘Top 25 Greatest College Football Players Ever’ in 2008.
Personal Life & Legacy
He married Lauren Campbell in 2000 and the couple have three sons: Nigel, Nicholas and Noah. Sanders filed for divorce in 2012.
Barry J. Sanders is his son from a previous relationship. Barry has followed his father’s footstep for a successful football career and enrolled at Stanford for the 2012-2013 college season.

See the events in life of Barry Sanders in Chronological Order