Barbara Jill Walters was a television personality and broadcast journalist who first became famous as the segment producer of women’s interest stories on the NBC News program ‘The Today Show’. Highly acclaimed for her exceptional interviewing ability and journalistic standards, she was the first woman ever to acquire the title ‘co-host’ for any news program. She was very popular with the viewers because of which she was allotted more air time by the channel. An ambitious woman who became a role model for other female journalists to follow, she became the first female co-anchor of any network evening news when she worked with Harry Reasoner on the ‘ABC Evening News’. Thereafter she hosted several morning television shows like ‘Today’ and ‘The View’. For twenty-five years she worked as the co-host and producer of the news magazine ‘20/20’ (from 1979 to 2004). She was noted for her candid, no nonsense style of speaking and was known to never mince words even when speaking about sensitive issues. Her field of specialty was personality journalism and she had the distinction of interviewing several world leaders, including the Shah of Iran, Russia’s Boris Yeltsin, China’s Jiang Zemin, Libya’s Muammar al-Gaddafi and India’s Indira Gandhi. Martha Stewart
DID WE MISS SOMEONE?
CLICK HERE AND TELL US
WE'LL MAKE SURE
THEY'RE HERE A.S.A.P
Quick Facts

She was born on September 25, 1929, to Jewish parents Dena and Louis Walters in Boston. Her father worked as a Broadway producer and was also the Entertainment Director for the Tropicana Resort and Casino.

Because of her father’s profession she grew up in close proximity to celebrities, thus she was never in awe of them.
She attended Lawrence School in Brookline. Her family later moved to New York City where she attended high school at Birch Wathen School and graduated in 1947.
She enrolled at Sarah Lawrence College from where she earned her B.A. in English. 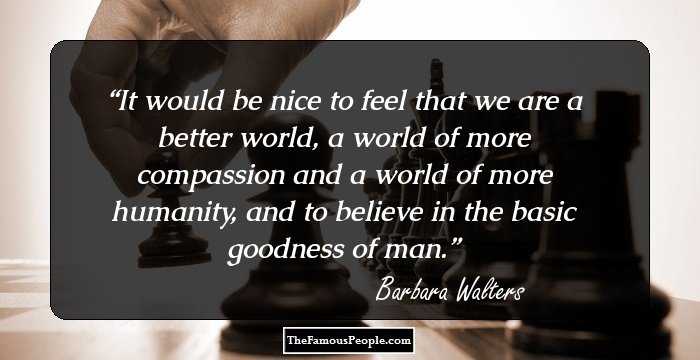 Quotes: Believe
Continue Reading Below
Career
After college she moved to New York City to look for work. She worked for a year at a small advertising agency before bagging a job at the NBC network affiliate in New York City, WNBT-TV.

In 1953, she produced a 15- minute children’s program, ‘Ask the Camera’ which was directed by Roone Arledge. In 1955, she became a writer of ‘The Morning Show’ at CBS. She joined Tex McCrary Inc. as a publicist and then worked for a few years as a writer at the ‘Redbook’ magazine.

Barbara Walters joined NBC’s ‘The Today Show’ as a writer and researcher in 1961, and soon became the show’s regular ‘Today Girl’. During those times women were given only lighter assignments like the weather to report.

In defying the traditions of that era, she began developing and writing her own reports and interviews. She became the first female co-host of ‘The Today Show’ in 1974.

She was teamed up with Harry Reasoner as a co-anchor on the ‘ABC Evening News in 1976-78. However, the two had a very difficult working relationship as Reasoner did not like having a female co-anchor.

While working with ABC she had served as a commentator on news specials like presidential inaugurations and as moderator between candidates Jimmy Carter and Gerald Ford during the 1976 Presidential Elections.

She was best known for her personality journalism and her interviewing skills. She conducted a joint interview of Egypt’s President Anwar Al Sadat, and Israel’s Prime Minister, Menachem Begin in November 1977.

She joined the ABC newsmagazine ’20/20’ in 1979, and became a regular special contributor by 1981. She worked together with Hugh Downs for years and had a great working relationship with him.

Over her long and productive career she interviewed leaders from all over the world including U.K’s Margaret Thatcher, Cuba’s Fidel Castro, Russia’s Boris Yeltsin and Venezuelan President, Hugo Chavez. She also interviewed celebrity icons like Michael Jackson, Sir Laurence Olivier and Katharine Hepburn.

She along with Bill Geddie conceived the idea for the talk show ‘The View’ that has aired on ABC since August 1997. The show has run for over 26 seasons and the panelists discuss a variety of social and political issues.

She took semi-retirement in 2004. She no longer worked as a broadcast journalist but continued as a correspondent for ABC News as well as a host of ABC’s special programs. She also continued to co-host ‘The View’. She announced that she will retire fully in May 2014. 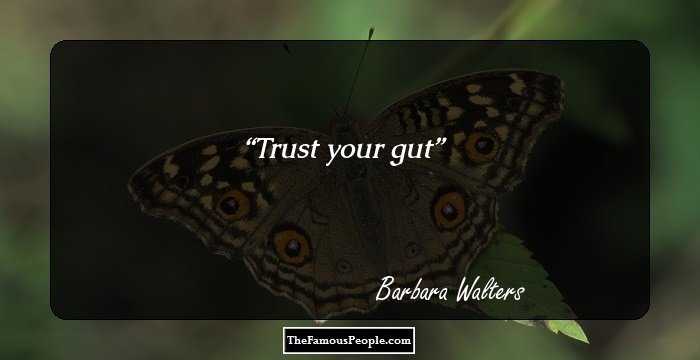 Major Works
She worked as the co-host and producer of the television newsmagazine ‘20/20’ for 25 years from 1979 till 2004. The program follows a format similar to CBS’s ’60 Minutes’ but focuses more on human interest stories rather than on political issues.
Awards & Achievements

She was the recipient of several Daytime Emmy Awards, her first win being the Award for Outstanding Talk Show Host (Today) in 1975.

She won the Lucy Award in recognition of her excellence and innovation in her creative works that have enhanced the perception of women through the medium of television in 1998.
Personal Life & Legacy

Barbara Walters was first married to a business executive Robert Henry Katz in 1955. The marriage was very short lived.

She married Lee Guber, a theatrical producer and theater owner in 1963. They adopted one daughter and divorced in 1976.

Barbara Walters suffered from a heart condition 'aortic valve stenosis' and she underwent a procedure to fix a faulty heart wall in 2010. She died at her home in Manhattan on december 30, 2022. She was 93.

See the events in life of Barbara Walters in Chronological Order