(Best Known for Her Role in the Movie 'Double Jeopardy')

Golden Globe nominated American actress, Ashley Judd has acted in more than 20 films and is known for her devotion to humanitarian work. She was voted as one of the '25 Most Intriguing People' by ‘People' magazine and was also ranked at number 20 on the 'FHM’ magazine’s list of 'Sexiest Women in the World'. Some of her well-known movies include, 'Ruby in Paradise', 'Natural Born Killers', 'Norma Jean & Marilyn', 'Kiss the Girls', 'Double Jeopardy', 'Divine Secrets of the Ya-Ya Sisterhood', 'Crossing Over' and 'Tooth Fairy'. She was also seen in the Emmy Award nominated mystery thriller series, 'Missing'. With a net worth of $22 million, Judd has established herself as one of the most leading actresses in Hollywood. She has also come out with her autobiographical book, ‘All That is Bitter & Sweet', chronicled from her childhood to adulthood. With a film career that has lasted more than 15 years, Judd has managed to make her mark as a powerful performer, versatile actress and most importantly a passionate and devoted humanitarian. American People
American Women
California Actresses
Aries Actresses
Women Activists
Childhood & Early Life
She was born as Ashley Tyler Ciminella in Granada Hills, Los Angeles, U.S.A. Her parents are Michael Charles Ciminella, a marketing analyst and Naomi Judd, a country music singer.
After her parents divorced in 1972, she was raised by her mother in Kentucky, where he spent much of her childhood. She also lived for a brief period in Marin County, California.
She went to many schools because her family kept moving. She attended about 13 schools including, Sayre School, Paul G. Blazer High School and Franklin High School.
She enrolled at the University of Kentucky, where she studied French, art history, anthropology, theatre and women’s studies. She went to France to major in French. 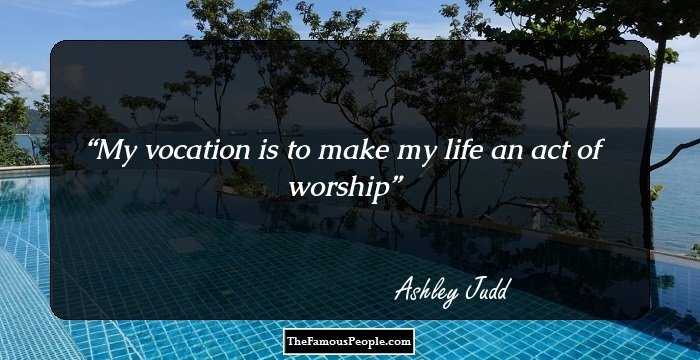 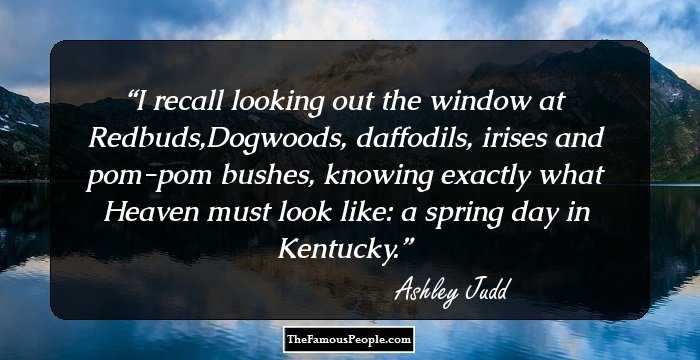 Quotes: I
Awards & Achievements
In 2000, she received a Blockbuster Entertainment Award for the category of 'Favourite Actress - Suspense' for the film, ' Double Jeopardy'.
In 2009, she received an Honorary Doctor of Humane Letters from Union College in Barbourville, Kentucky.
Personal Life & Legacy
In 2001, she married racer Dario Franchitti. They got divorced in 2013.
Around 2007, she stayed at the Shades of Hope Treatment Center in Buffalo Gap, Texas, after she suffered from bouts of depression, sleeplessness and co-dependency.
In 2008, she supported Barack Obama in his Presidential campaign.
In 2010, she obtained a masters degree in public administration, mid-career, from the Kennedy School of Government.
In 2011, she came out with her autobiographical book, ‘All That Is Bitter and Sweet'.
She is involved in a lot of humanitarian work. She is an ambassador for YouthAIDS, a prevention program under Population Services International.
In 2011, she became a part of the Leadership Council of the International Center for Research on Women. She has also worked and supported many charities and foundations.
She is a self-proclaimed feminist.
Trivia
This acclaimed Golden Globe nominated American actresses changed 12 schools in 13 years, before she attended college.
Recommended Lists:
Activists #18

See the events in life of Ashley Judd in Chronological Order