Arundhati Bhattacharya is a retired Indian banker and the first woman chairperson of the 'State Bank of India.' She served on the board of several other companies. Bhattacharya, who once aspired to become a journalist, casually took up the entrance exam for the SBI and cracked the exam. This is how her glorious journey in the banking industry began. In her decades-long career with the SBI, Bhattacharya brought in several revolutionary changes that benefitted the bank. Bhattacharya also introduced several pro-women policies for SBI employees. Bhattacharya served in various departments of the SBI, including retail, corporate, large corporate, treasury, new businesses, human resource, and investment banking. She was also instrumental in introduction of various reforms In the SBI. Under Bhattacharya's leadership, SBI transformed from a state-run lender into a customer-friendly bank. She retired as the chairperson of SBI in 2017. Jamie Dimon
Bankers #78
Business People #1422
Continue Reading Below
18th March In History
DID WE MISS SOMEONE?
CLICK HERE AND TELL US
WE'LL MAKE SURE
THEY'RE HERE A.S.A.P
Quick Facts

awards: CNN-IBN Indian of the Year in Business

Indian People
University Of Calcutta
Female Bankers
Indian Bankers
Pisces Entrepreneurs
Childhood & Early Life
Aundhati Bhattacharya was born on March 18, 1956, in Kolkata, West Bengal, India, to Prodyut Kumar Mukherjee, an engineer at 'Bokaro Steel Plant,' and Kalyani Mukherjee, a homeopathy consultant.
She attended 'St. Xavier's School' in Bokaro and then studied English literature at 'Lady Brabourne College' in Kolkata. Bhattacharya graduated from 'Jadavpur University' in Kolkata.
In 1977, while studying at 'Jadavpur University,' Bhattacharya got to know about the entrance exams for the probationary officer (PO) post in the 'State Bank of India' (SBI). She appeared in the entrance exam and got through. Bhattacharya cleared the subsequent rounds as well.
Continue Reading Below
You May Like

The Hottest Male Celebrities With The Best Abs
Career
Bhattacharya joined the SBI as a probationary officer (PO) in September 1977. She was first posted at the Alipore branch (Kolkata main branch) in West Bengal as a grade-1 level junior management executive. Bhattacharya mainly looked into the bank guarantees section and also learned how to handle court cases.
Bhattacharya was then moved to the local head office in the capacity of a planner. In 1983, she was transferred to the Kharagpur branch. From 1987 to 1990, she served at the Nimpura branch, which is 14 km from Kharagpur, as a branch manager. Bhattacharya then returned to Kharagpur as branch manager.
During her nine-year tenure at Kharagpur, Bhattacharya received three promotions and exited as an assistant general manager. In 1993, she was posted to the commercial branch in Kolkata.
In 1996, Bhattacharya worked as vice-president branch co-ordination in the US. She worked in the branch's performance and audit department, in New York, from 1996 to 2000.
Back in India, Bhattacharya was posted in the foreign department of the Kolkata branch. It was increasingly becoming difficult for her to balance her personal and professional life.
In 2006, Bhattacharya joined the SBI Lucknow branch as the retail operation in-charge of eastern Uttar Pradesh. Her struggle to manage work and personal life continued, so she decided to quit the job. She, however, dropped the idea on the advice of her mentor and former chairman of the SBI, M.S Verma.
Bhattacharya moved to Mumbai in 2008, as a general manager. Within a month, she was promoted as the chief general manager and chief general manager of 'SBI New Businesses' in 2009. Bhattacharya also got to work in general insurance and mobile banking. From November 2010, she served as the deputy managing director and corporate development officer for two years.
She subsequently served a stint in Bangalore and returned back to Mumbai in 2011 as the deputy MD of human resources; she later became the CEO of 'SBI Capital,' an SBI subsidiary.
Bhattacharya became the CFO of SBI in 2013 and superseded three male colleagues to become the first woman chairperson of the State Bank of India. Bhattacharya took over from Pratip Chaudhuri, who retired on September 30, 2013.
Continue Reading Below
As the first woman chairperson of the SBI, Bhattacharya introduced several pro-women policies. She initiated a transfer policy that included flexible timing and temporary deputation and a two-year sabbatical leave policy, which allow female employees to manage work and home simultaneously.
On the ‘International Women's Day,’ Bhattacharya announced free vaccination for cervical cancer to all the female employees of the SBI.
Bhattacharya was supposed to retire in October 2016, but she received an extension till October 2017, due to the controversial merger of five SBI associate banks and 'Bharatiya Mahila Bank.' She retired as the SBI chairperson on October 6, 2017. With that, she became the first chairperson in the history of SBI to have an extension after retirement.
in 2016, the 'Forbes' named Bhattacharya as the 25th ‘most powerful woman in the world’ while 'Fortune' listed her the 4th ‘most powerful women in the Asia Pacific.’ She was also nominated for the post of managing director and the chief operating officer (CEO) of the 'World Bank.'
Bhattacharya has also served as the chairperson of the 'SBI Foundation,' 'State Bank of Mysore,' 'State Bank of Hyderabad,' 'State Bank of Patiala,' 'SBI Pension Funds Pvt Ltd.,' 'SBI Global Factors Ltd.,' 'State Bank of Bikaner & Jaipur,' 'SBI General Insurance Co. Ltd.,' 'SBI Cards & Payment Services Pvt Ltd.,' 'SBI Capital Markets Ltd.,' 'SBI DFHI Ltd.,' 'State Bank of Travancore,' and 'SBI Life Insurance Co. Ltd.'
On October 17, 2018, Bhattacharya began her five-year tenure at 'Reliance Industries' as an additional director.
She was also listed among the 'FP Top 100 Global Thinkers' by 'Foreign Policy' magazine. In 2017, 'India Today' magazine placed Bhattacharya at number 19 in ‘India's 50 most powerful people’ of the year.
In 2018, Bhattacharya received the 'Business Leader of the Year' title at 'The Asian Awards.' The same year, 'Harvard Business Review Ascend' published her interview titled 'Arundhati Bhattacharya: The Making of SBI's First Woman Chairperson.'
Family & Personal Life
Bhattacharya got married to Professor Pritimoy Bhattacharya in 1983. The couple has a daughter, Sukrita, who works in the field of HR.
Bhattacharya faced a tough time managing work and home when her husband contracted typhoid. After the birth of her daughter, Sukrita, her struggle to make the balance got tougher. Sukrita was a few months old when Bhattacharya went to the US. Unable to take care of her daughter, she sent Sukrita back to India for a year.
While in Lucknow in 2006, Bhattacharya contemplated quitting as she could not find a suitable school for Sukrita.
Bhattacharya enjoys listening to music and is a voracious reader. She initially read only fiction, but eventually developed interest in non-fiction, too.
Trivia
While in college, Bhattacharya aspired to become a print journalist and dreamt of writing a book. She wanted to pursue an MA in English literature. She also dreamt of becoming a museologist.
Bhattacharya was an average student till class 5. However, her grades improved after she joined 'St Xavier.'
Bhattacharya did not know cooking at the time of her marriage, but with the help of her mother's recipe book, she managed to learn cooking.
You May Like

See the events in life of Arundhati Bhattacharya in Chronological Order 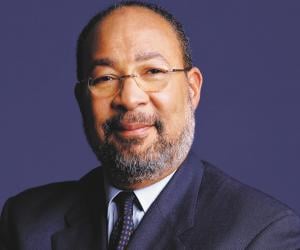