Advanced Search
Arnold Palmer turned the status of the game of golf from being a mere game to a compelling sports activity. Fondly nicknamed The King, he was associated with the tremendous golf boom that the sporting activity witnessed in the latter half of the twentieth century that none ever anticipated. One of the greatest players in the history of men’s professional golf, he, with his charismatic looks, not just made the game popular but successfully broke the jinx of golf as being the pastime of the elite and upper class only. He widened the accessibility of the game to the middle and working class, thus establishing a new found reputation to golf. A trailblazer of the golfing world, he, in his lifetime won 92 tournaments and became the highest earner of the sport. What’s more, even after ceasing to win tournaments, he remained as one of the highest earners in golf due to his appeal to sponsors and the public. It was due to his sheer sportsmanship and excellence at playing the games that he became the first golfer ever to be bestowed with the prestigious Presidential Medal of Honor. Even after retirement, Palmer contributed to the sports in a big way by turning into an acute businessman and golf course designer. Jack Nicklaus
DID WE MISS SOMEONE?
CLICK HERE AND TELL US
WE'LL MAKE SURE
THEY'RE HERE A.S.A.P
Quick Facts

American Celebrities
American Men
Male Golfers
American Golfers
Male Sportspersons
Childhood & Early Life
Arnold Palmer was born to Milfred Deacon Palmer in Latrobe, Pennsylvania. His father was a head professional and greenskeeper at Latrobe Country Club.
It was his father who embedded in young Palmer the seed of golf. Picking up the trick of the sport since early on, he trained himself at the game like his father.
By the time he turned 17, he had won two state interscholastic championships. It was his excellence over the game that helped him bag a seat at the Wake Forest University on a golf scholarship.
The tragic death of his friend led him to drop out of the university in the senior year. He instead drafted himself in the US Coast Guard, thus taking a hiatus of three years both from education and golf.
Relieved from his duties after three years, he resumed college and golf activities. Soon he gained his form and went on to win the 1954 US Amateur title and the Ohio Amateur Championship. It was these wins in amateur tournaments that helped him turn a pro. 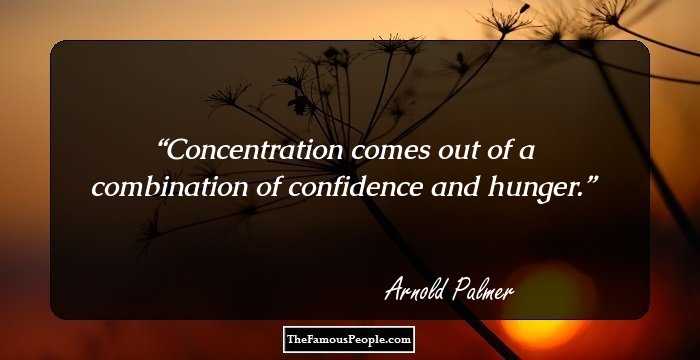 Continue Reading Below
Career
His professional career started on a good note as he recorded victory at the 1955 Canadian Open in his rookie season. He continued displaying powerful performances which helped him bag a series of victories.
Though his proficiency at the game earned him a streak of wins, it was the victory at the 1958 Masters Tournament that launched him as a professional golfer earning him much fame and recognition.
In 1969, he became one of the clients of the pioneering sports agent, Mark McCormack. The same year, he won the US Open and yet again recorded a victory at the Masters Tournament.
With an aim to recreate the winning streak of Bobby Jones, Walter Hagen and Sam Snead of winning all the three in a single year, he headed to Scotland to play at The Open Championship. However, he lost the title by a shot to KelNagle. Nevertheless, he earned himself a huge fan base amongst the British and Europeans.
The first three years of the 1960s was the most successful years in his career as he recorded massive victories. He not just won the 29 PGA Tour titles but earned a whopping $400,000 in prize money. Furthermore, he served as a winning captain of the US Ryder Cup.
He recorded back to back victories at The Open Championship in 1961 and 1962. Furthermore, he won two more Masters Tournaments title in 1962 and 1964, taking the total to four titles, the first ever recorded by a golfer
From 1955 to 1971, he won a PGA Tour event every year. In 1967, he became the first man to eclipse one million dollars in career earnings on the PGA Tour. In 1971, he won four events in a revival series. Four years later, he yet again captained the US Ryder team.
Later in life, i.e. in 1980, he became eligible in the Senior PGA Tour, which is currently known as the Champions Tour. He enjoyed big victories in the Senior Tour, winning ten events on the tour including five senior majors.
He recorded a victory at the first World Match Play Championship in England. In 2004, he competed in the Masters Tournament, thus making his 50th consecutive and last appearance at the tournament.
Continue Reading Below
It was in the 2005 U.S. Senior Open that he announced his retirement from senior majors. He officially retired from tournament golf on October 13, 2006. In his overall career, he recorded 92 titles, with seven major championships including four Masters, two British Opens and one US Open.
Other than sports, he had great acumen for business as well and enjoys a diverse golf-related business career. He was the owner of the Bay Hill Club and Lodge, Arnold Palmer Invitational and the Latrobe Country Club, where his father used to be a club professional.
Furthermore, he helped found The Golf Channel and built the first golf course in the People's Republic of China. He even founded a beverage, Arnold Palmer, which combines iced sweet tea with lemonade. 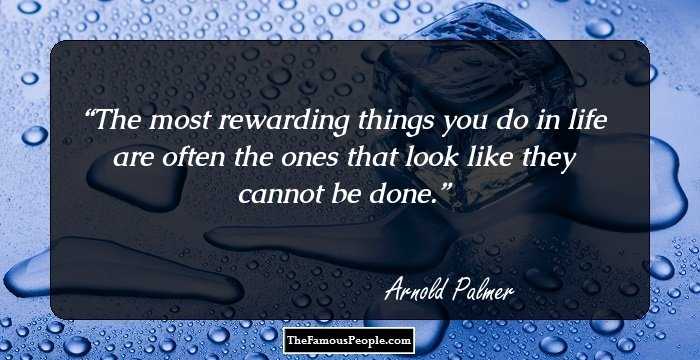 Quotes: You, Life, Like
Awards & Achievements
In 1974, he was inducted into the World Golf Hall of Fame.
In 1998, he was presented with the PGA Tour Lifetime Achievement Award
In 2000, he was ranked as the sixth greatest player of all time in the Golf Digest magazine.
He was conferred with the prestigious Presidential Medal of Freedom in 2004. Five years later, he was bestowed the Congressional Gold Medal.
Since 2007, he had been the honorary starter of the masters Tournament and for three years from 2007 to 2009, he was the sole honorary starter
Personal Life & Legacy
He tied the nuptial knot with Winnie Palmer. The couple stayed together for 45 years until her death in 1999 due to complications arising out of ovarian cancer.
In 2005, he married Kathleen Gawthrop.
His grandson, Sam Saunders is a professional golfer
Other than golfing and business, he was a passionate pilot for 50 years. In January 2011, he took his last ride as a pilot.
He died in Pittsburgh, Pennsylvania, on September 25, 2016, at the age of 87.
He died in Pittsburgh, Pennsylvania, on September 25, 2016, at the age of 87. 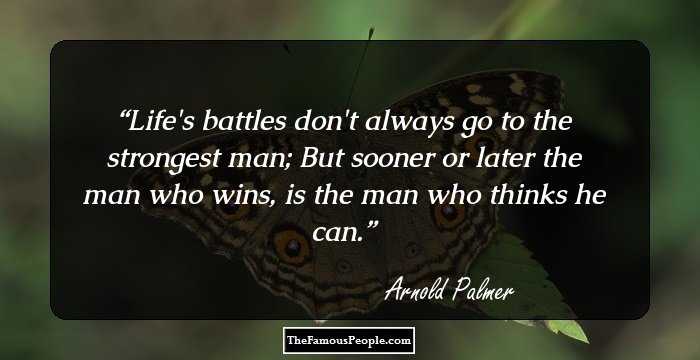 See the events in life of Arnold Palmer in Chronological Order