Aretha Louise Franklin, known as The Queen of Soul, was the first woman ever to be inducted in the Rock and Roll Hall of Fame. She was born in a religious household in Tennessee to Reverend C.L. Franklin. Her mother was a gospel singer. She was interested in music and singing from a very young age and taught herself to play the piano. Her father recognized her talent for singing and started to manage her from the time she was 14, trying to get her a deal with a record company. She was signed for the first time by Columbia Records, the association that lasted for 6 years and she became an instant international craze. Later, she signed the Atlantic records and Arista Records, the label that she stuck with for 20 good years. She was the winner of 18 Grammy Awards and has also received many American Music Awards. She had given to the world acclaimed albums like: I Never Loved a Man the Way I Love You, Soul Lady, Young, Gifted & Black, etc. She was one of the best-selling female artists of all time and had been listed twice on the ‘100 Greatest Artists of All Time’ and ‘100 Greatest Singers of All Time’ lists on the Rolling Stone magazine. Zendaya Maree S...
25th March In History
DID WE MISS SOMEONE?
CLICK HERE AND TELL US
WE'LL MAKE SURE
THEY'RE HERE A.S.A.P
Quick Facts

Aretha Franklin was born on March 25, 1942, in Memphis, Tennessee, to Clarence LaVaughan ‘C.L.’ Franklin and Barbara Siggers Franklin. Her father was a Baptist preacher, while her mother was a gospel singer. She had 3 siblings and they all grew up in a religious household. Her sisters Carolyn and Erma were also singers.

When Franklin was 5 years old, her family relocated to Detroit, Michigan where her father founded a Baptist hchurch. When she was 6, her parents separated because of her father’s infamous promiscuity. Thereafter, her mother moved to Buffalo.

When she was 10, her mother died; her grandmother and aunts took care of her and her siblings. Her father was getting more and more famous for his sermons by this time and was known as the man with the ‘million-dollar voice’.

She started to learn how to play the piano on her own when she was only a little girl and her earliest songs were recorded at the church when she was 14. She also used to sing on the revival tours of her father. 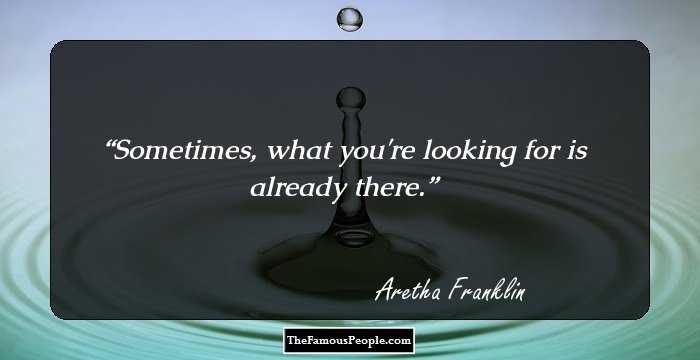 At the age of 14, Franklin’s talent for singing was recognized by her father who started managing her, to get her a recording deal. In 1956, her first album, Songs of Faith, came out under J. V. B. Records label.

In 1960, Franklin was signed by Columbia Records, after she persuaded her father to let her record pop music. Her popular single ‘Today I Sung the Blues’ was released in the same year - it reached the Hot Rhythm & Blue Sellers Chart.

In 1961, Franklin’s debut pop album came out with Columbia Records, titled ‘Aretha: With The Ray Bryant Combo’. The album was an instant hit with the American listeners and the hit single ‘Rock-a-bye’ catapulted her into an international star.
In 1962, the same recording company released two of her albums: ‘The Electrifying Aretha Franklin’ and ‘The Tender, the Moving, the Swinging Aretha Franklin’. By this time, she was called the ‘new-star female vocalist’ by A-list magazines.
From 1964-1966, Franklin released various hit singles like: ‘Runnin’ Out of Fools’, ‘One Step Ahead’, ‘Cry Like a Baby’, ‘You Made Me Love You’, etc. under Columbia Records. She also appeared on shows like Hollywood A Go-Go.
In 1967, Aretha singed to Atlantic Records and released ‘I Never Love a Man the Way I Love You’ which topped the R&B chart and the Billboard Hot 100 with hit singles like: ‘Do Right Woman, Do Right man’, ‘Respect’, etc.
In 1968, she released her albums: ‘Lady Soul’ and ‘Aretha Now’ with the Atlantic Records, giving hit singles like: ‘I say a Little Prayer’, ‘Think’, etc. She also received two Grammys and SCLC Drum Beat Award for Musicians.
In the 1970s, Franklin released albums like ‘Spirit in the Dark’, ‘Young, Gifted & Black’, ‘Hey Now Hey’, ‘You’, ‘Sweet Passion’ etc. She also released her first gospel album, titled ‘Amazing Grace’ during the same time.
During the same years, she recorded her first live album ‘Aretha Live at Fillmore West’. She gave out hit singles like: ‘Angel’, ‘Until You Come Back to Me’, ‘I’m in Love’, etc. She also worked on the soundtrack of the movie ‘Sparkle’.
Continue Reading Below
In 1980, she signed the Arista Records and gave a memorable performance for the Queen of England at the Royal Albert Hall. She also did a cameo in the musical ‘The Blues Brothers’ in the same year.
During the same time, ‘Aretha’ was released. She got nominated for a Grammy for one of the singles from the album ‘I can’t Turn You Loose’. A hit single ‘United Together’ made to the number 3 on the R&B chart.
In 1981, Franklin released her album ‘Love All the Hurt Away’. The album included her famous duet with George Benson ‘Hold On, I’m Comin’, which eventually fetched her Grammy. It was her 11th Grammy so far.
In 1985, ‘Jump to It’ was released. It was a Gold standard album and a huge commercial hit after almost 7 years. The single from the album, with the same title, ranked first on ‘top 40 single on the pop charts’.
In 1985, she released ‘Who’s Zoomin’ Who’, which became her first platinum album and sold over a million copies. It included the hit singles like ‘Freeway of Love’ and ‘Sisters Are Doing It for Themselves’.
In 1987, she released another gospel album, titled ‘One Lord, One Faith, One Baptism’, which was followed by another one ‘Through the Storm’. Around the same time her album ‘What You See is What You Sweat’ was released.
In 1998, her album ‘A Rose Is Still a Rose’ was released, which turned out to be of Gold standard. During the same time, Franklin gave a performance at the Grammy Awards, singing ‘Nessun Dorma’ and received an international acclaim for it.
From 2004-2009, Franklin released albums like: ‘So Damn Happy’, ‘Jewels in the Crown: All-Star Duets with the Queen’ and ‘This Christmas ‘Tis of Thee’. She also performed at President Barack Obama’s inaugural ceremony.
From 2010-2013, she recorded an album under her own label, ‘Aretha: A Woman Falling Out of Love’. She was honored by a degree from the Yale University. She is now working under RCA Records.
Continue Reading Below 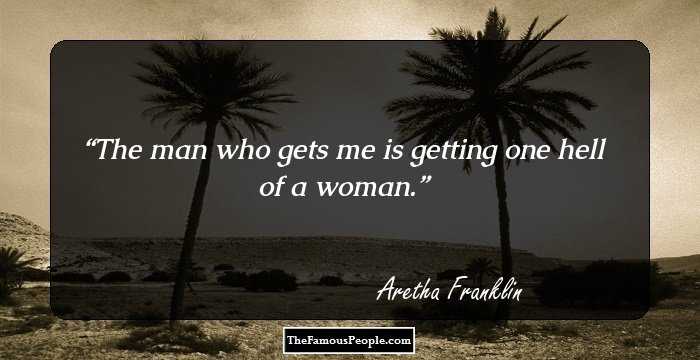 Rhythm & Blues Singers
Black Rhythm & Blues Singers
American Women
Tennessee Musicians
Awards & Achievements
Franklin was the winner of 18 Grammy Awards; she received these awards between the period of 1968-2008, for hit singles like: ‘Respect’, ‘Don’t Play That Song’, ‘Freeway of Love’, ‘Wonderful’, ‘A House is Not A Home’, ‘Chain of Fools’, etc.
She was the winner of 3 American Music Awards in the category of ‘Favorite Soul/R&B Female Artist’, in between the years 1976-1983. She was also the first female artist ever to have been inducted in the Rock and Roll Hall of Fame and Museum.
Recommended Lists:

Aretha Franklin became a mother quite early in life. She gave birth to her first son when she was not even 13. She named him Clarence after her father. Though she never revealed the identity of his father, according to news site Inquisitr, "The father of the child was Donald Burk, a boy she knew from school". However, in one of her handwritten wills, Franklin had revealed that the father of her first child was Edward Jordan.

Her second son, Edward, was born two years later in 1957 and she named him after his father Edward Jordan. Clarence and Edward were raised by her grandmother and sister, while she pursued her music career.

In 1961, she married Ted White despite objections from her father. Ted was much older to her and the marriage did not work out. Franklin was subjected to domestic violence throughout their marriage and they divorced in 1969.

In 1964, Franklin gave birth to her third son, Ted White, Jr., who is now famously known as Teddy Richards and is a famous musician.

In 1968, her fourth son, Kecalf, was born. His father is Ken Cunningham, Aretha Franklin's former manager.

In 1978, she married actor Glynn Turman and took care of his three children from his former marriage. The couple divorced in 1984. Franklin later announced her plans to marry Willie Wilkerson, but called it off immediately.

She died of pancreatic neuroendocrine tumor on August 16, 2018. 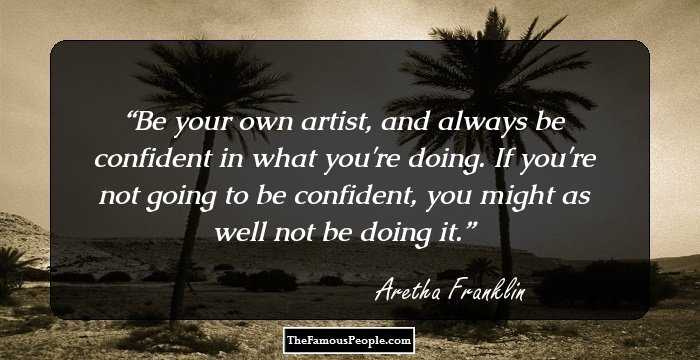 Franklin suffered from weight problems throughout her life.

She also suffered from alcoholism and was a chain smoker until 1992.
In 2005, she was inducted into the UK Rock and Roll Hall of Fame.
She was honored with National Medal of Arts and Presidential Medal of Freedom.

She was famous in the 80s for wearing extravagant dresses and nightgowns in her shows and concerts. She was the honorary aunt of recording artist Whitney Houston.

Quotes By Aretha Franklin | Quote Of The Day | Top 100 Quotes

See the events in life of Aretha Franklin in Chronological Order