Tony Hawk is a former American skateboarder and actor. He was one of the most influential skateboarders of the modern times. His tryst with skateboard began at the age of nine, when he got his elder brother’s blue fiber glass skateboard. Little did anyone know that this little boy would become one of the pioneers of vertical skateboarding in the coming years. He used to practice at the now-defunct Oasis Skatepark at the age of 12, performing maneuvers well beyond his age. He attracted numerous visitors as he performed spectacular maneuvers. As a child, he was hyperactive and the skateboard was an outlet for his excess energy. By the time he was 16 years old, he had become a professional skateboarder. With time, he was able to start his own skateboarding company called ‘BirdHouse,’ along with compatriot Per Welinder. He also initiated his own series of video games, 16 titles of which have been released since 1999. Through his own YouTube channel called Ride, he hosts various shows and has teamed up with several artists and musicians who have been inspired by skating. He has started the Tony Hawk Foundation for building skateparks for the underprivileged. American People
Sportspersons
American Men
Tall Celebrities
Tall Male Celebrities
Childhood and Early Life
He was born on May 12, 1968, in Carlsbad, California, to Nancy and Frank Peter Rupert Hawk. From an early age, he gave enough indications that he was blessed with exceptional intelligence and talent.
In 1980, he attended the Jean Farb Middle School and was also sponsored for skating. He would often push himself to perform well and then get disappointed at not being able to do so.
Due to his passion for skateboarding, he would keep stretching the barrier relentlessly. As a self guru, he was tougher on himself than anyone else could ever be.
By the time he was 16 years old, he was already regarded as one of the top skateboarders in America. 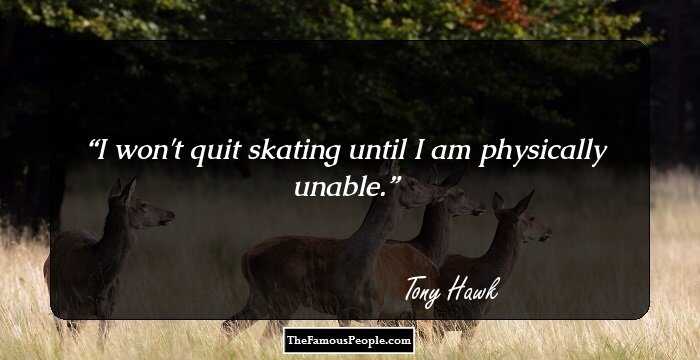 The Hottest Male Celebrities With The Best Abs
Career
In 1982, he joined the legendary Bones Brigade team, which was into professional skateboarding. This team comprised of Steve Caballero, Mike McGill, Lance Mountain and others, and had gained a huge reputation due to their antics.
He has made several movie and television appearances since the beginning of his career. The first one was in 1986 as a skater double for Josh Brolin in the movie Thrashin’.
Along with his compatriot Per Welinder, he started his own skateboarding company called ‘BirdHouse,’ In its iniial days, the company struggled to make ends meet. It was only when extreme sports gained popularity in 1995 that skateboarding came to limelight.
He was the first skater to perform a "900", a trick involving the completion of two-and-a-half mid-air revolutions (900 degress) on a skateboard. He performed the trick on July 27, 1999.
In 1999, he launched a video game series based on his skateboarding, titled 'Tony Hawk's Pro Skater'. The series has launched 18 titles so far.
He started an extreme sports tour called Boom Boom HuckJam, in the year 2002. It took shape after he retired from competitions.
Many parks have been created by him under the Tony Hawk Foundation. With this, he has provided grants for creating several public skateboard parks in low-income areas.
Additionally, a series of park rides known as Tony Hawk’s Big Spin was created in three Six Flags parks. In 2008, the rides were billed as the ‘total Tony Hawk experience’.
A new ride known as ‘Superman: Ultimate Fight’ was started in 2012 at Six Flags Mexico. This was after a ride at Six Flags Discovery Kingdom was moved there and discontinued.
Continue Reading Below
In January 2012, a YouTube channel in his name was launched, which created further fanfare. The channel was called ‘Ride’, and he partnered with some of the best skaters in this industry for it.
He has also appeared in a many movies and skating videos. Some of the movie starring him include: ‘Police Academy 4’, ‘Haggard’, ‘Waiting for Lighting’, ‘The Other F Word’ and ‘Comedy Bang! Bang!’. 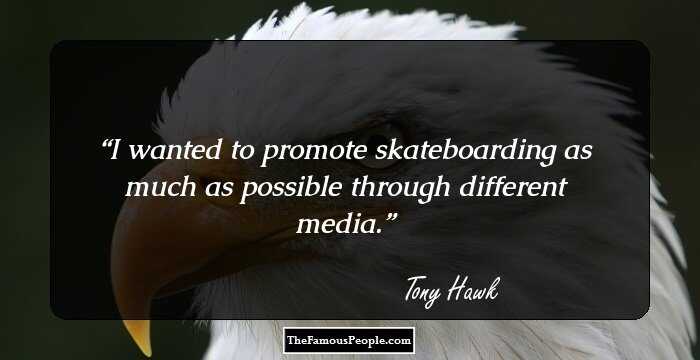 Awards and Achievements
In 2014, he was labeled as one of the 'Most influential skateboarders of all-time' by FoxWeekly.
He has got awards such as, Make-A-Wish’s Favorite Male Athlete, Nickelodeon’s Kid’s Choice Awards’ Favorite Male Athlete, and also Teen Choice Awards’. He beat legends Tiger Woods and Kobe Bryant for the above mentioned awards.
Personal Life
He first married Cindy Dunbar in the year 1990 and has a son Riley Hawk from her. The couple divorced in 1993.
He married Erin Lee in 1996. From this marriage, he has two sons: Spencer and Keegan. The second marriage ended in 2004.
In 2006 he married Lhotse Merriam. Their first child, named Kadence Clover Hawk, was born 2 years later. The couple divorced in 2011. 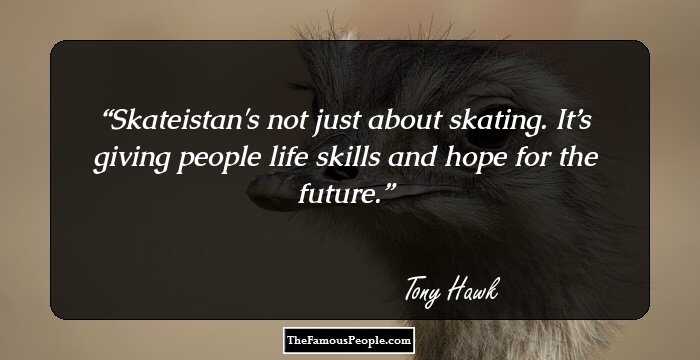 Trivia
Apart from movies, he has appeared in a few music videos. One of these was for artist Weird Al Yankovic, for which he wore a wig.

See the events in life of Tony Hawk in Chronological Order