Annie Oakley was an American sharpshooter and is considered America's first female superstar. Check out this biography to know about her childhood, family life, achievements and other facts related to her life. DID WE MISS SOMEONE?
CLICK HERE AND TELL US
WE'LL MAKE SURE
THEY'RE HERE A.S.A.P
Popularity Index
Annie Oakley
Quick Facts

Mangal Pandey
Annie Oakley was an American sharpshooter and is considered America's first female superstar. She shook up men's monopoly in the shooting field by winning a bet against famous marksman Frank E. Butler, whom she later married. She eventually started performing on 'Buffalo Bill's Wild West' show and toured various countries in Europe. She distinguished herself from the other performers by her self-made modest costumes, but she proved herself no less a performer, showing off skills like shooting through flying cards or shooting off corks from bottles. She even entertained members of the royalty, such as Queen Victoria of the United Kingdom, King Umberto I of Italy, French President Marie François Sadi Carnot and German Kaiser Wilhelm II. A number of plays, movies and television series were made based on her life, the most famous being the stage and film versions of 'Annie Get Your Gun'. She taught many women how to use a gun. Even after becoming one of the biggest stars in her field, she remembered her early days of poverty and helped orphans by donating to various charities. Leo Women
Childhood & Early Life
Annie Oakley was born as Phoebe Ann Mosey on August 13, 1860, in rural Darke County, Ohio, to Susan Wise and Jacob Mosey. She was the fifth of her parents' seven surviving children.
When she was six, her father died of pneumonia after being out in the blizzard once. Her mother got married again, but her second husband, Daniel Brumbaugh, also died soon. Unable to support all her children, her mother sent her and her elder sister, Sarah, to the Darke County Infirmary in 1870.
While living with the Edingtons, the superintendent of the infirmary and his wife, Annie Oakley helped them around the infirmary and learned to sew. She was later sent to a local family to take care of their newborn child in exchange for an education. However, the family forced her to do heavy menial work and even abused her for a long time. She eventually managed to escape and returned to the Edingtons, who sent her back to her mother.
In 1874, her mother got married for a third time, but her marriage to Joseph Shaw was not enough to revive the family's financial conditions. Annie, eager to help her family, started hunting for game with her father's rifle, selling those to the local shopkeepers, hotels and restaurants. At the age of 15, she paid off the mortgage on her mother's farm with her earnings. 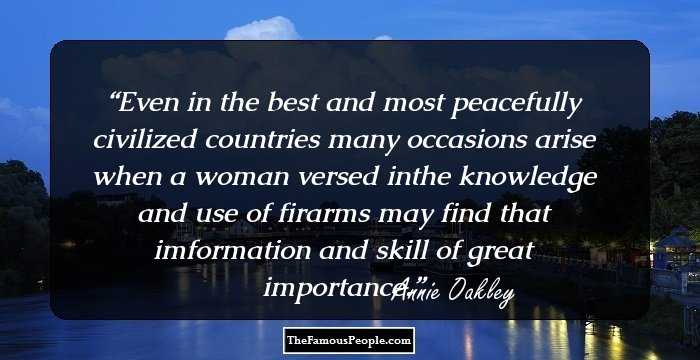 Celebrities Who Look Beautiful Even Without Makeup
Marriage & Early Career
In 1875, on Thanksgiving Day, a local hotel owner arranged a shooting match between Annie Oakley and Frank E. Butler, a traveling show marksman. Butler placed a $100 bet per side with the hotel owner that he could beat any local fancy shooter. Annie Oakley won the bet, as well as Butler's heart, who married her the following year after months of courtship. Some sources point out that the shooting match might have happened in 1881, followed by their marriage the next year.
Butler continued to perform on shows for some time, often teaming up with a male partner. However, once his partner fell ill during a show in 1882, Annie replaced him and immediately charmed the audience with her performance.
Soon after, she started to perform professionally and took the stage name "Oakley", apparently from the town of Oakley, Ohio. Butler helped her gain exposure and began to act as her manager. Instead of wearing risqué outfits worn by other female performers, she put her sewing skills to use and created her own costumes.
In 1884, during an event in St. Paul, Minnesota, she impressed legendary Native American warrior Sitting Bull, who gave her the nickname "Watanya Cicilla," or "Little Sure Shot". She later became known by the nickname as it started to appear on advertisements of her shows. 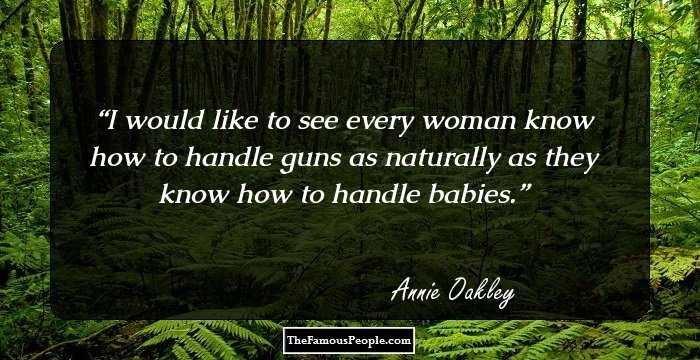 Quotes: Like, I
'Wild West' Show
In 1885, Annie Oakley and her husband joined 'Buffalo Bill's Wild West', a circus-like touring show. She started to show off her remarkable skills as a sharpshooter and continued to entertain the audience as part of the company for almost 17 long years.
During a show at the American Exposition in London in 1887, she charmed Queen Victoria with her performance. In spite of that, her success was marred by a rivalry with another sharpshooter, Lillian Smith, which eventually forced her to quit the company after the show.
She toured with a rival 'Wild West' show for some time, but returned to 'Buffalo Bill's Wild West' after Smith left the show. In 1889, she began a three-year-long tour of Europe, starting with Paris.
After a train accident in 1901, she was partially paralyzed for some time. Upon recovery, she left the 'Wild West' show and started a career as a stage actor in a play written on her. She played the 'cowgirl' Nancy Berry in the play named 'The Western Girl'.
Continue Reading Below
Major Works
Annie Oakley was the best attraction of 'Buffalo Bill's Wild West' show and its top earning act. She could perform stunts including shooting a cigarette held in her husband's lips, shooting objects looking through a mirror, splitting cards on their edges, etc.
She considered it empowering for young women to be able to use a gun, and took initiative to teach over 15,000 women to shoot. A supporter of women's education and independence, she thought women should be allowed to serve in the war. 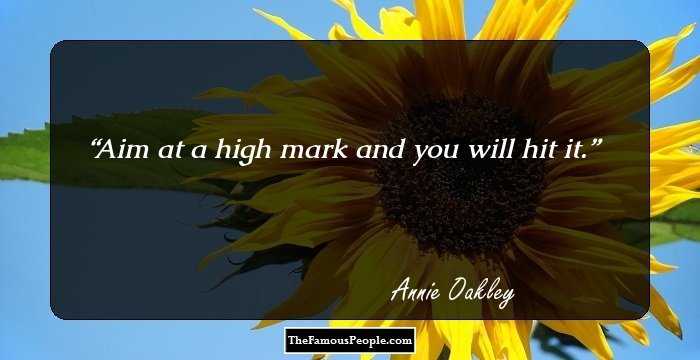 Quotes: You, Will
Awards & Achievements
Annie Oakley volunteered to organize a regiment of female sharpshooters during the Spanish-American War. Even though her petition was rejected by President McKinley, Theodore Roosevelt named his volunteer cavalry the "Rough Riders" after Oakley's show title.
She became America's first female star and was a major influence behind the 'cowgirl' image. She proved that if given equal opportunities, women can achieve as much as men. She has been inducted into the 'National Cowgirl Museum and Hall of Fame', the 'National Women's Hall of Fame' and the 'Ohio Women's Hall of Fame', among others.
Personal Life & Legacy
In 1903, William Randolph Hearst published a false article on Annie Oakley, mentioning that she was arrested for stealing to support a cocaine habit. Outraged, she spent a lot of time and money throughout the next few years and eventually won 54 of the 55 lawsuits she had filed against various newspapers.
Annie Oakley and Butler remained married for fifty years, till her death on November 3, 1926, in Greenville, Ohio. She died of pernicious anemia, at the age of 66. Reportedly, her husband, Butler, was so depressed that he starved himself to death 18 days after her death.
The couple did not have any children, and her fortune went to charities that she was affiliated to. Spending a good deal of her childhood in foster care, she was compassionate towards children and donated to support orphans.
Trivia
As one of her acts, Annie Oakley shot through playing cards on the air and put a hole in them. When theatres started to issue complimentary tickets during her lifetime, they punched them in the middle to prevent further sales and referred to the tickets as "Annie Oakleys".
You May Like

Quotes By Annie Oakley | Quote Of The Day | Top 100 Quotes

See the events in life of Annie Oakley in Chronological Order 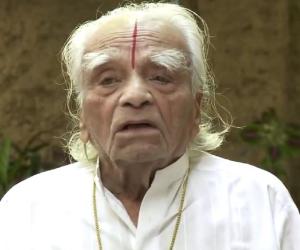