Anna Wintour is a British-American fashion journalist and editor-in-chief of American ‘Vogue,’ a monthly fashion and lifestyle magazine. Her journey in fashion journalism began in England when she worked with two British magazines. She then moved to the US and worked in publications like ‘Harper's Bazaar,’ ‘Viva,’ ‘New York,’ and ‘House & Garden.’ She went back to England to join the British ‘Vogue.’ She then joined the magazine’s New York wing where she became the editor-in-chief in July 1988. She played an instrumental role in reviving the magazine, which was struggling at that time. She transformed the publication into a more youthful and receptive magazine, focusing on modern perception on style and fashion. She was made the artistic director of ‘Condé Nast,’ the publisher of ‘Vogue.’ She is noted for her trademark dark sunglasses and bob haircut. Her reputedly stand-offish and demanding nature gave her the epithet ‘Nuclear Wintour.’ While she is largely acclaimed for supporting young designers, she often faces criticism for using the magazine as a platform to pass on the viewpoints of the elite society regarding beauty and femininity. She has also been criticized by animal rights activists for endorsing fur. Anna Wintour was born on November 3, 1949, in Hampstead, London, England, to Charles Wintour and Eleanor "Nonie" Trego Baker as one of their five children. Her father was working as an editor for a free daily newspaper called ‘The London Evening Standard’ and her mother was a philanthropist. Her parents divorced in 1979.

She studied at the ‘North London Collegiate School.’ She was independent-minded since her early days and often revolted against the dress code of her school by wearing short skirts. At the age of 15, she landed her first job with the help of her father at the renowned boutique ‘Biba.’ She decided to give up her academics and dropped out of her school and took up a training program at ‘Harrods.’ She enrolled in a school to attend fashion classes at the insistence of her parents, but dropped out of the school.

From 15 years of age, she has been flaunting bob hairstyle. She admired and frequented the London clubs that were visited by some of the biggest pop stars including ‘Rolling Stones’ and ‘Beatles.’

She went out with older men who had good connections. She dated English novelist and historian Piers Paul Read and later became a well-known face in the London club circuit along with Nigel Dempster, a gossip columnist.

She was a fashion enthusiast from her teenage years and regularly viewed Cathy McGowan on ‘Ready Steady Go!’ She also keenly awaited the issues of ‘Seventeen’ that were sent by her grandmother from America.

On several occasions, her father Charles Wintour consulted her for ideas to make newspapers youth-friendly. Richard Neville, co-editor of ‘Oz,’ a counterculture magazine, was one of her older boyfriends. Thanks to Richard, she had her first experience on magazine production. 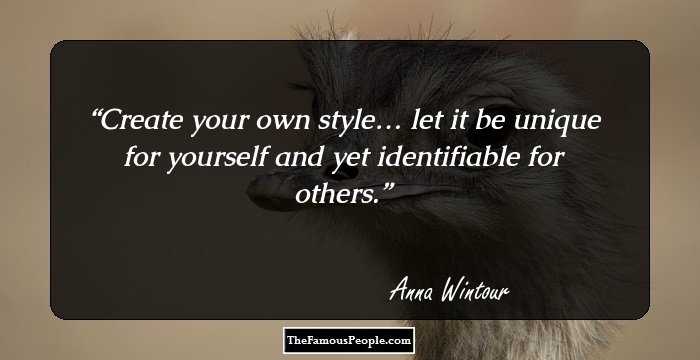 Quotes: Yourself
Continue Reading Below
Career

She landed her first job in the field of fashion journalism in 1970 when she was inducted as an editorial assistant at ‘Harper's & Queen.’ Here, she worked with path-breaking photographers like Jim Lee and Helmut Newtown among others. Her well-connected network helped her in getting good and creative locations for photo shoots.

After quitting her job, she shifted to New York along with her freelance journalist boyfriend Jon Bradshaw. In 1975, she took up the job of a junior fashion editor at Harper's Bazaar’s New York wing. She was fired by Editor Tony Mazzola after nine months.

With the aid of Jon Bradshaw, she joined a women’s adult magazine called ‘Viva’ as its fashion editor, but the magazine was shut down in 1978.

In 1980, she became the fashion editor of ‘Savvy,’ a women’s magazine. In 1981, she was working with ‘New York’ as its fashion editor. Under the instruction of Editor Edward Kosner, she worked on different sections and eventually learned how a celebrity cover plays an instrumental role in selling copies.

She became the creative director of ‘Vogue’ in 1983, accepting an offer from the editorial director of ‘Condé Nast’ Alex Liberman, following a bargain that doubled her remuneration.

In 1985, she became the chief editor of British ‘Vogue,’ succeeding Beatrix Miller, and went back to London to take up her post. After taking charge, she made various changes, including replacing employees. She proved to be a strict disciplinarian with a temperamental and impatient nature that earned her epithets, such as ‘Nuclear Wintour’ and ‘Wintour of Our Discontent.’

In 1987, she joined ‘House and Garden,’ another publication of ‘Condé Nast,’ where she made certain fundamental changes. She went on to discard some already paid articles and photos worth $2 million in her very first week. When she renamed the magazine as ‘HG,’ the magazine not only failed to garner support from its long-time subscribers, but also lost many of them and eventually lost many of its conventional advertisers.

In 1988, she became the editor-in-chief of American ‘Vogue’ and moved to New York. At that time, ‘Vogue’ was struggling as it faced stiff competition from ‘Elle,’ a then-three-year-old publication.

Anna Wintour played an instrumental role in reviving the magazine. She made rigorous changes, altered the style of cover pictures, and transformed the publication into a more youthful and receptive magazine focusing on modern perception on style and fashion. She did not hesitate to tread new ground. She started featuring celebrities instead of supermodels on cover pages and introduced a mix of expensive and low-end fashion items during her photo shoots.

In 2013, she became the artistic director for ‘Condé Nast,’ while retaining her position in ‘Vogue.’

She eventually became an influential name in the world of fashion, and is largely acclaimed for helping young designers, such as Alexander McQueen and Marc Jacobs.

Her political affiliation for the ‘Democratic Party’ came through during the 2000 Senate run of Hillary Clinton and the 2004 presidential run of John Kerry. During the presidential runs of Barack Obama in 2008 and 2012, she served as a bundler and remained a host alongside Sarah Jessica Parker at the fundraising events that saw the likes of Meryl Streep as attendees. During Barack Obama’s first term, she participated in a fundraiser along with Harvey Weinstein and Calvin Klein.

In 2013, she hired Hildy Kuryk as the director of communication for ‘Vogue.’ Kuryk served as a fundraiser during the first campaign of Barack Obama and also for the ‘Democratic National Committee.’

In 2014, she was seen in a documentary titled ‘The Fashion Fund,’ which is about the CFDA/Vogue Fashion Fund competition. It was aired on ‘Ovation TV.’ The documentary also featured Diane von Furstenberg, Ken Downing, Andrew Rosen, and Jenna Lyons. 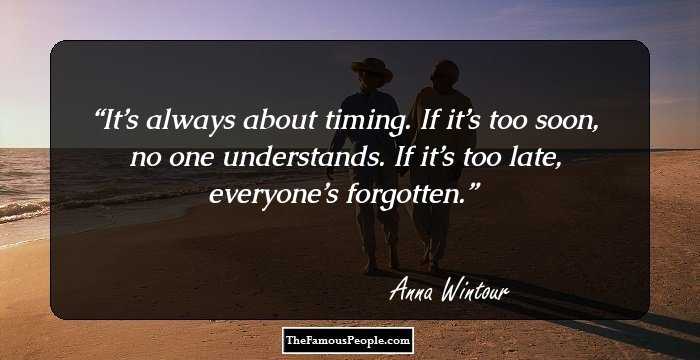 Her determination and zeal to improve the sales of the American ‘Vogue’ after becoming its editor-in-chief in 1988 bore fruit as the magazine regained its position as the frontrunner, beating three of its competitors, ‘Harper’s Bazaar,’ ‘Mirabella,’ and ‘Elle.’ She successfully accomplished her goal of restoring the glory of ‘Vogue’ in her long and illustrious career with the magazine.

She married child psychiatrist David Shaffer in 1984 and they have two children: Charles, born in 1985, and Katherine, born in 1987. Anna and David divorced in 1999.

It has been rumored that she is in a relationship with American investor Shelby Bryan since her divorce in 1999. But Anna has never confirmed the same and refuses to comment on her relationship status.

She was created Dame Commander of the Order of the British Empire by Queen Elizabeth II in May 2017 at Buckingham Palace for her contribution to fashion and journalism. 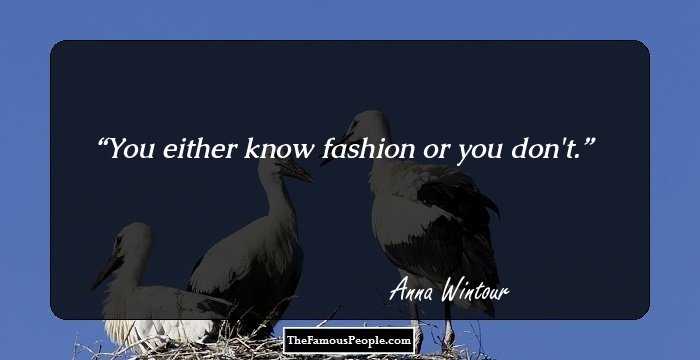 She is associated with ‘Metropolitan Museum of Art’ in New York as one of its trustees and has raised funds regularly for its ‘Costume Institute.’

Since 1990, she has raised funds worth over $10 million for AIDS charities.

The CFDA/Vogue fund was started by her to aid unknown fashion designers.

She also aided in raising funds for the ‘Twin Towers’ after it was destroyed in the September 11, 2001 terror attack.

‘The Devil Wears Prada’ (2003), written by her former assistant Lauren Weisberger, narrates the story of a demanding boss resembling Wintour. It was made into a film in 2006. She surprised everyone when she attended the premiere of the film.

The ‘Costume Institute’ complex of the ‘Metropolitan Museum of Art’ was named after her in January 2014.

‘Forbes’ named her as the world’s 39th most powerful woman.

See the events in life of Anna Wintour in Chronological Order 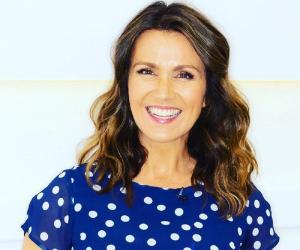