(Comedian, Best known for His Portrayal of 'Latka Gravas' on the Sitcom 'Taxi')

The comedian Andrew Geoffrey Andy Kaufman was known for his unorthodox style of humour. Pranks and practical jokes were his trademark and his impersonations of famous personalities, wooed audiences. Starting early on, as the host of an imaginative TV show in his bedroom, he developed his signature style of performance. His first audiences were his classmates; who got to see his performance on their birthday celebrations. In college, he started his own program, which helped him learn the basics of writing, producing and directing a show. Starting as a stand-up artist in local clubs, he rose to fame with his character of ‘Foreign Man’, which later inspired the TV sitcom character ‘Latka Gravas’. Kaufman’s realistic impersonation of Elvis Presley even received praise from the man himself. He brought his unconventional sense of comedy to the wrestling arena when he paired with heavyweights such as Jerry Lawler, to stage the Inter-gender Wrestling Championship’ where he duelled with women wrestlers. Known for staging famous ruse, Andy’s death was also believed to be a hoax by many. The death rumours were further reinforced, when Andy’s writer friend Bob Zmuda appeared in a public appearance, dressed as the character of ‘Tony Clifton’ portrayed by Andy. To know more about the life and works of Andy Kaufman read the following biography 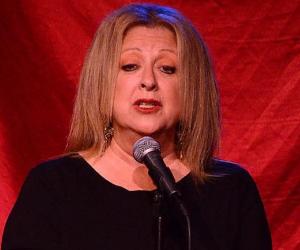 American Celebrities
American Men
New Yorkers Actors
Male Comedians
Capricorn Actors
Childhood & Early Life
Andy, the first child of Janice Bernstein and Stanley Kaufman, was born on January 17th, 1949, in New York and raised in the posh locality of Great Neck, Long Island.
Bitten by the entertainment bug, he began performing magic shows in the birthday parties of kids living in his locality, at the tender age of 8. He also staged the broadcast of a fictitious comedy show from his bedroom as a child.
He started his primary education at the ‘Saddle Rock Elementary’, but was later transferred to ‘Baker Hill Elementary school’, in 1956. A performance of the famous percussion player, Babtunde Olatunji, in his school, sparked his interest in learning to play Congas.
Andy attended the army recruitment camp, during the Vietnam War, after completing high school in 1967, but he was denied enlistment because of his poor performance in the psychological test.
Later he joined ‘Grahm Junior College’, located in Boston, to study television and radio production. As an undergrad, he starred in a comedy show titled ‘Uncle Andy’s Funhouse’, which he scripted, directed and even produced it himself. 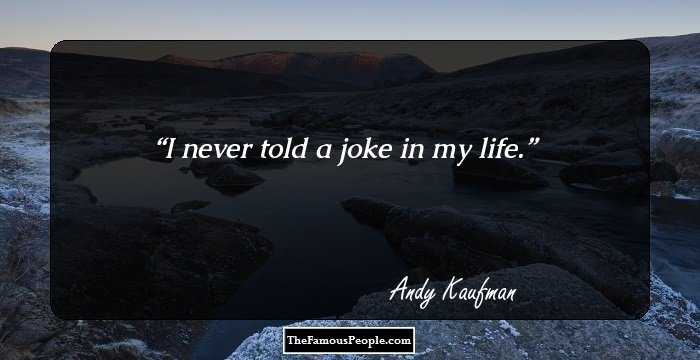 Quotes: Life, Never, I
Continue Reading Below
Career
Andy started his career as a stand-up comedian in various night clubs of Long Island, after graduating in 1971. Budd Friedman, founder of the ‘Improvisation Comedy Club’, who happened to be present during one of his gigs, recruited him for performing at the place.
Known for his unorthodox style, Andy would pique the interest of audiences and when they grow accustomed to his style and expect to see more, he would come up with something bizarre. In one such incident, he started reciting the novel ‘The Great Gatsby’ aloud. The viewers, who were anticipating a prank, got tired of waiting and vacated the venue.
During his performances at the ‘Improv’ venues in Los Angeles and New York, his most famous comic portrayal was the character of ‘Foreign Man’, who supposedly hailed from the fictional island of Caspiar. The character would lip-sync the lines of a recording based on the cartoon the ‘Mighty Mouse’, and then crack a few jokes or imitate some celebrities.
In 1975, Andy auditioned for the comedy show ‘Saturday Night Live’, as per the suggestion of television executive Dick Ebersol. His performance of the ‘Mighty Mouse’ impression was included in the ‘NBC’ premiere of the first season of the show. Depicting the character of a shady policeman, the next year, he made his cinematic debut next year through the movie ‘God Told Me To’.
As ‘Foreign Man’, he impersonated a number of celebrities, but his imitation of Elvis Presley became the highlight of the shows. The act became so popular that the ‘American Broadcasting Company’ approached Andy for the role of Latka Gravas in the 1978 sitcom titled ‘Taxi’.
The character of Latka was inspired from Foreign Man. Though Kaufman’s character was much appreciated, and he appeared in a total of 79 episodes on the show, in reality he detested being a part of sitcoms.
Spontaneity and theatricality were the trademarks of Andy’s performances. In the April of 1979, at the beginning of a show, he introduced the audience to his grandmother whom he had invited for his show.
To the surprise of the audiences, it was revealed at the end that fellow comedian Robin Williams had dressed up as his grandmother. Even before the audiences could come to terms with this surprise, he invited the entire crowd for a treat of milk and cookies.
He starred in three episodes of the 1981 ‘ABC’ channel show, ‘Fridays’. Taking his co-star Michael Richards and producer Jack Burns into confidence, Andy staged a brawl, between the three of them on the show.
Continue Reading Below
It started with Andy refusing to play his part and in the ensuing chaos Michael splashing him with water. A furious Jack stormed onto the sets before the show went into a commercial. An apology from Andy was then taped and broadcasted the following week.
The comedian was also known for his hoax wrestling matches, where he was pitted against professional women boxers. He roped in performance artist Laurie Anderson as his confederate. He proclaimed himself as the champion of inter-gender wrestling and offered prize money of $1000 to the woman contender who could defeat him.
In his efforts to bridge his show business with professional wrestling, he went on to stage his famous fight with legendary wrestler Jerry ‘The King’ Lawler. He even staged a brawl on the ‘Late Night with David Letterman’ show, in 1982.
In the 1983 parody ‘My Breakfast with Blassie’, Johnny Legend directed Kaufman and Freddie Blassie, the famous wrestling villain. During the shoot of the movie, Andy met Lynne Marguiles, with whom he remained in a relationship until death.
Major Works
All of Kauffman’s performances were hilarious and unique, but the character of Foreign Man which later inspired the character of Latka Gravas in the 1970s sitcom ‘Taxi’, is undeniably his best act. Though Andy was initially reluctant to be a part of the sitcom, the show earned him two ‘Golden Globe’ nominations and opened the gates of the television world for him.
Personal Life & Legacy
Though the comedian never entered the wedlock, he had a daughter with his childhood fling, this child was later abandoned by him.
Adopted by another couple, his daughter Maria Bellu-Colonna later found out about her biological parents, and in 1992, she started a search for them and was reunited with her mother and relatives. Andy was also in a relationship with his co-actress Lynne Margulies, till his death.
He was a dedicated exponent of Transcendental Meditation and led a healthy lifestyle. It was ironic that he died of Lung cancer, when he abstained from smoking on all occasions.
The rock band ‘R.E.M.’ paid a musical tribute to Andy in their song ‘Man of the Moon’. His biographies, titled ‘Andy Kaufman Revealed! Best Friend Tells All by Zmuda’ and ‘Life in the Funhouse: The Life and Mind of Andy Kaufman by Bill Zehme’, were published in 1999.
He was diagnosed with a rare strain of lung cancer in 1983. Ironically, Andy was always a health freak and his daily regimen included three hours of transcendental meditation. Even after being diagnosed he opted for natural therapy along with modern medicine.
He later received radiotherapy and even psychic surgery, but died of a renal failure at the ‘Cedars-Sinai Medical Center’, L.A, California on May 16, 1984. He was entombed at Long Island in the ‘Beth David Cemetery’.
Trivia
Famous for his performance acts, the news of this comedian’s demise was not believed by many, who thought it was another of his pranks.

See the events in life of Andy Kaufman in Chronological Order