Anderson Hays Cooper is an award-winning journalist and television personality. He is well known for his work with the television channel CNN. Cooper is famous for his high journalistic standards and has covered several major news events around the world. War reporting fascinates him as he is often puzzled by the philosophical thought of why some people survive hardships while others succumb to them. He was always interested in news reporting and journalism. He became a self-taught journalist when he entered Myanmar with a fake press pass and made his own news coverage which he sold to a small channel. He traveled to several war-ravaged regions of the world and filmed stories from Vietnam, Somalia, and Rwanda. He then accepted a position as a correspondent for ABC News and then began hosting a reality show titled ‘The Mole.’ He switched over to CNN because of his interest in broadcast news. Since then, he has covered a number of important stories like the tsunami in Sri Lanka, the death of Pope John Paul II, the conflicts in Egypt and Syria, the Boston Marathon bombing, and the Sandy Hook shootings. Currently, he hosts the television news show ‘Anderson Cooper 360°.’ Jimmy Fallon
3rd June In History
DID WE MISS SOMEONE?
CLICK HERE AND TELL US
WE'LL MAKE SURE
THEY'RE HERE A.S.A.P
Quick Facts

American People
Journalists
TV Presenters
American Men
Yale University
Childhood & Early Life
Anderson Hays Cooper was born on June 3, 1967, in New York City, USA, to Wyatt Emory Cooper, a writer, and Gloria Vanderbilt, an artist, designer, and writer.
He was exposed to media from a very young age. His baby photograph appeared on ‘Harper’s Bazaar.’He was a guest on ‘The Tonight Show’ in 1970 when he was just three years old. He modeled for‘Ford Models’ when he was 10 years old.
He attended ‘Dalton School’ in New York City. After graduating, the adventurous youngster traveled around Africa for several months. He then went to ‘Yale University’ from where he graduated in 1989, majoring in political science.
He interned for two summers at the ‘Central Intelligence Agency.’However, he did not find it interesting enough and decided to become a journalist.
He worked as a reporter for a short period of time before moving to Vietnam for a year where he studied the Vietnamese language at the ‘University of Hanoi.’ 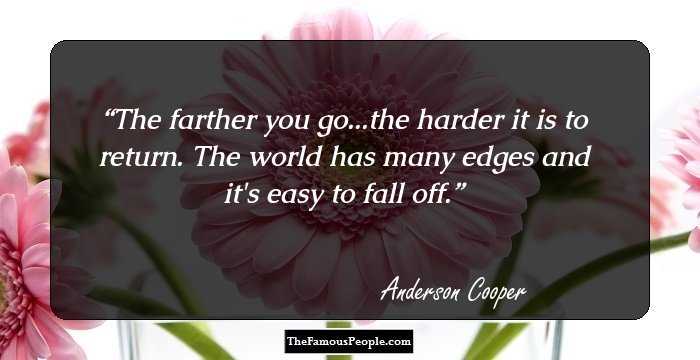 Quotes: You
Continue Reading Below
Career
After college, his first job was as a fact checker for a small news agency named‘Channel One.’ Bored with his job, he obtained a fake press pass and entered Myanmar on his own. In Myanmar, he made his own news segments which he sold to ‘Channel One.’
He was made a correspondent for ABC News in 1995. Eventually, he became the co-anchor of its ‘World News Now’ program in 1999.
In 2000, he started hosting ABC’s reality show ‘The Mole.’ The show is a competition in which the contestants work together to add money to a pot which only one of them will win in the end. He left the game show after its second season.
He returned to broadcasting news in 2001 by joining CNN. Initially, he anchored alongside Paula Zahn in ‘American Morning’ before becoming CNN’s weekend prime-time anchor in 2002.
He started anchoring ‘Anderson Cooper 3600,’ a news show on CNN, which is broadcast around the world on CNN International. The program covers a number of news stories and also includes analysis from experts.
He covered several important news stories in 2005, including the tsunami in Sri Lanka, the Cedar revolution, the death of Pope John Paul II, and the royal wedding of Prince Charles and Camilla Parker Bowles. These coverages made him very famous and also won him several prestigious awards.
He was added as a co-anchor to the show ‘NewsNight’ in 2005 as a temporary arrangement. Following his addition, the rating of the program increased significantly and Cooper was made a permanent co-anchor.
To leverage on Cooper’s popularity, CNN expanded his program ‘Anderson Cooper 3600’ to two hours andthe show was shifted to the 10 pm slot in November 2005. CNN was so happy with his performance that he was offered a multi-year deal.His annual salary was doubled from $2 million to $4 million in 2007.
In 2007, he also hosted the documentary ‘Planet in Peril’ with Sanjay Gupta and Jeff Corwin on CNN.Hethen hosted the ‘CNN Heroes: An All-Star Tribute,’ a show in which ordinary people who perform extraordinary deeds are honored.
Continue Reading Below
He then ventured into daytime talk show and hosted ‘Anderson Live,’ a syndicated show which debuted in September 2011 as ‘Anderson.’ The show was distributed in the U.S. and Canada by ‘Warner Bros. Television.’ The show’s final episode was aired in May 2013.
He became the first openly gay person to moderate the second presidential debate between Hillary Clinton and Donald Trump in 2016.
Subsequently, he co-hosted the annual CNN New Year’s Eve coverage alongside Andy Cohen in 2017 and 2018. Apart from being a CNN anchor, Cooper also serves as the correspondent for CBS’s news program ‘60 Minutes.’ 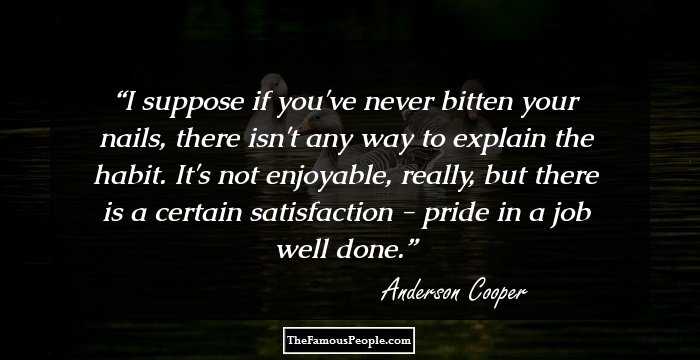 Quotes: Never, I
Major Works
He is best known as the host of the award-winning news show ‘Anderson Cooper 3600’ which is a nightly newscast that focuses on the day’s news and events. The show was initially aired for an hour, but Cooper’s rising popularity prompted CNN to expand the program for two hours. The show also includes expert analysis on the day’s events and issues.
Awards & Achievements
He was awarded the ‘National Order of Honour and Merit’ by the government of Haiti in 2010 for his reporting on 2010 Haiti earthquake.
He won the ‘Emmy Award’ for ‘Outstanding Coverage of a Breaking News Story in a Regularly Scheduled Newscast’ for ‘Anderson Cooper 360: "Haiti in Ruins" in 2011.He has also won three other‘Emmy Awards’; two in 2006 and one in 1997. 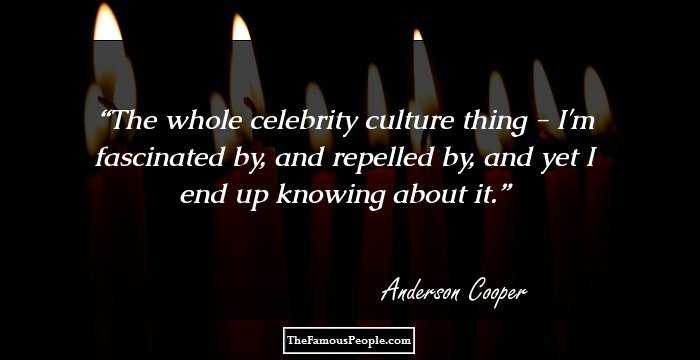 Quotes By Anderson Cooper | Quote Of The Day | Top 100 Quotes

See the events in life of Anderson Cooper in Chronological Order