With 10 million subscribers across three YouTube channels and three bestselling books to his credit, Alfie Deyes is an easily recognizable youth icon. In 2009, he started his YouTube channel PointlessBlog which contains videos of him doing random things. He later created two more YouTube channels, PointlessBlogVlogs and PointlessBlogGames. Apart from 5.4 million subscribers on his primary YouTube channel, he also has a 3.5 million fan following on twitter and 4.4 million on Instagram (as of September, 2016). He also authored three activity books, The Pointless Book, The Pointless Book 2 and The Scrapbook of My Life. The books encourage the readers to take part in different activities, and also come with companion apps. As a member of the channel "Guinness World Records OMG!", Alfie created several world records including "Most bangles put on in 30 seconds by a team of two" and "Most party poppers popped in 30 seconds". Yahoo! News included him into the list of "12 Web-savvy entrepreneurs to watch" in December 2013. This YouTube sensation was featured on the Company magazine cover in January 2014 for its 'Generation YouTube' feature. He also made it to Debrett's 500 most influential people in Britain in 2015. 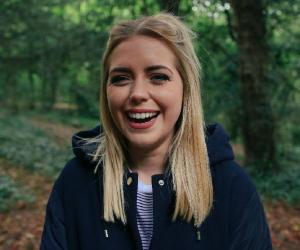 British People
Tall Celebrities
Tall Male Celebrities
Virgo Youtubers
Male Youtubers
The Meteoric Rise To Stardom
What had started as a secret experiment with his family camera to upload on YouTube a careless video about spending a boring rainy day, soon made him the YouTube sensation that he has become. As he watched other vloggers on the internet, it influenced him to turn his own hobby of making videos while playing with his friends into his passion, and later profession. To his surprise, he soon started getting recognition and the number of his subscribers rose steadily. Starting out with the PointlessBlog YouTube channel at the age of 15, he now has an immense presence on various social media platforms that is hard to overlook. He has collaborated with many famous YouTubers and his most viewed video, "Ariana Grande Does My Makeup", features the American pop singer Ariana Grande. His popularity as a youth icon eventually helped him sign a deal with Blink Publishing for his Pointless Book series.
Recommended Lists:

British Vloggers
British YouTubers
Virgo Men
You May Like

The Sexiest Men Of 2020, Ranked
Continue Reading Below
What Makes Alfie Deyes So Special
When a huge crowd of 8,000 people wait for several hours to attend the book signing of an author, it certainly begs the question, "What makes him special?" Obviously, even before Alfie Deyes became an author, vlogging made him special. However, before that he was just another British young boy. The thing with vlogging is that it is a video log of one's life permanently caught on the internet. It provides a peek into the life of another person who is as vulnerable as we are. This also creates a direct connection between the author and the audience. According to Alfie himself, "I'm exactly the same as the person watching the video, I just happen to be on the other side of the screen." This simplicity and down-to-earth attitude is a reasonable explanation for his popularity, though some of his female fans might have a soft spot for him due to the fact that he proclaims himself a feminist. Despite his celebrity status, Alfie always makes sure to have extra time on his schedule whenever he goes out, so that he can spend time talking to his fans and taking pictures with them.
Beyond Fame
The life of an internet celebrity is not easy by any means. Alfie works seven days a week, with half-day off on Saturdays. He uploads 13 videos per week, constantly recording every aspect of his life. He intends to remain consistent in posting videos as he doesn't want to disappoint his fans who now know when to expect a new video from him. The Alfie Deyes brand doesn't only include his YouTube channels and his books though. He has recently started a new product line for T-shirts, hats, hoodies, and even iPhone cases. He helped raise money for Ebola epidemic as part of the Band Aid 30 charity and was featured on the 2014 single "Do They Know It's Christmas?"
Behind The Curtains
Alfie Deyes spent his childhood in London with his parents. He is currently in a relationship with another fellow vlogger Zoe Sugg, who is better known as Zoella on YouTube (with over 11 million subscribers, she is a popular beauty and fashion blogger). Alfie briefly shared apartment with YouTuber Caspar Lee before he moved to Brighton with his girlfriend. Alfie and Zoe often collaborate to create videos for their channels and appear in each other's videos. He has a sister named Poppy who is also a famous internet personality.