Advanced Search
One of the greatest inventors of the late 19th century, Alexander Graham Bell is probably most famous for the invention of the telephone and the ‘Bell Telephone Company’, he formed soon after. Throughout his life, he sought to foster the advancement of scientific knowledge with his utmost dedication and sincere efforts. His career only began in earnest after his family moved from London, England to Ontario, Canada in an attempt to improve his health. He started as an elocution teacher for the deaf people where he worked tirelessly to spread an early form of sign language across America. He displayed his innovative talent with his invention of various sound recording and transmission devices. In his later years, his research interests shifted away from transmission devices to transport, including both aeronautics and experimental forms of boats that would later progress to become known as hydrofoils. His greatest achievement remains the invention of the telephone that has changed and continues to change the way people communicate around the world. He was a pioneer, who gifted mankind with one of the most astonishing and trailblazing discoveries in human history, the telephone.

American Celebrities
Scottish Celebrities
Scientists
Electrical Engineers
American Men
Scottish Men
Childhood & Early Life
He was born on March 3, 1847, in Edinburgh, Scotland, to Prof. Alexander Melville Bell and his wife Eliza Grace Symonds. He had two brothers—Melville James Bell and Edward Charles Bell—both of whom died of tuberculosis.
His father taught elocution to the deaf and had developed what was called the ‘Visible Speech’ system to help deaf children learn to speak. He received most of his early education from his mother who was an unusually gifted painter and pianist, despite her deafness.
Throughout his childhood, he spent short periods of time in traditional educational institutions including Edinburgh's Royal High School, which he left at the age of 15.
He initially attended University of Edinburgh and then the University College, London, England, but did not receive a formal education comparable to his peers in Victorian Britain.
In 1870, after the death of two of his brothers, the Bell family moved to Canada for the sake of his health. Expanding on his father's work of teaching deaf people to communicate, he began working on transmitting telephonic messages. 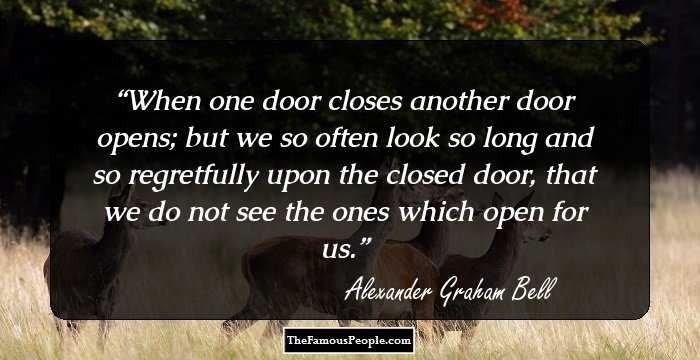 Continue Reading Below
Career
In 1872, he founded ‘School of Vocal Physiology and Mechanics of Speech’ in Boston, where he taught elocution to his pupils. In 1873, he was appointed the professor of ‘Vocal Physiology and Elocution’ at the Boston University School of Oratory.
While pursuing his teaching profession, he conducted his research to perfect the harmonic telegraph, so as to transmit several telegraph messages simultaneously over a single wire. Alongside, he was also drawn towards another idea of transmitting the human voice over wires.
In 1874, he hired an assistant, Thomas Watson, a skilled electrician, who developed the tools and instruments he needed to continue the project. Over the subsequent years, they formed a great partnership and labored on both the ideas, the harmonic telegraph and a voice transmitting device.
On March 10, 1876, he produced the first intelligible telephone call, when he summoned his assistant, with words that Bell transcribed in his lab notes as “Mr. Watson—come here—I want to see you”. Watson heard his voice through the wire and thus received the first telephone call.
A legal battle ensued with inventor Elisha Gray who claimed his invention of the telephone predated Bell's; the U.S. Supreme Court ruled in Bell's favor and subsequently ‘Bell Telephone Company’ was formed in 1877.
By 1883, he created the technology for the Graphophone and other early sound recording equipment, including a magnetic recording technology that was an early form of tape recording.
Towards the end of the 19th century his interests began to move away from sound transmission and recording to transport technologies. He developed a passion for air travel and helped to establish the Aerial Experiment Association in 1907.
From 1906 to 1919, he also worked on boating inventions that would lead to the development of the hydrofoil craft. 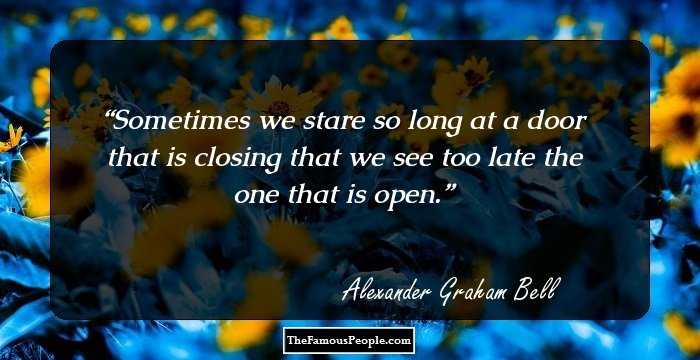 Continue Reading Below
Major Works
He is most famous for his pioneering work on the development of the telephone. He worked with Thomas Watson, his assistant, on the design and patent of the first practical telephone.
Many other inventions marked his later life including the refinement of the phonograph. His other exceptional works were in the field of hydrofoils and aeronautics. In all, he held 18 patents in his name alone and 12 that he shared with collaborators.
He was one of the founders of the National Geographic Society in 1888 and served as its president from 1896 to 1904.
Awards & Achievements
In 1880, Bell received the Volta Prize with a purse of 50,000 francs for the invention of the telephone from the Académiefrançaise, representing the French government.
He received the Légion d'honneur (Legion of Honor) from the French government in 1881.
In 1902, The Society of Arts of London, England, awarded him the Albert Medal for his invention of the telephone.
In 1912, The Franklin Institute awarded him the Elliott Cresson Medal in the field of Engineering for "Electrical Transmission of Articulate Speech".
He was awarded the AIEE's Edison Medal in 1914 "For meritorious achievement in the invention of the telephone".
He also received at least a dozen honorary degrees from numerous academic institutions, including eight honorary LL.D.s (Doctorate of Laws), two PhD, a D.Sc. and an M.D. 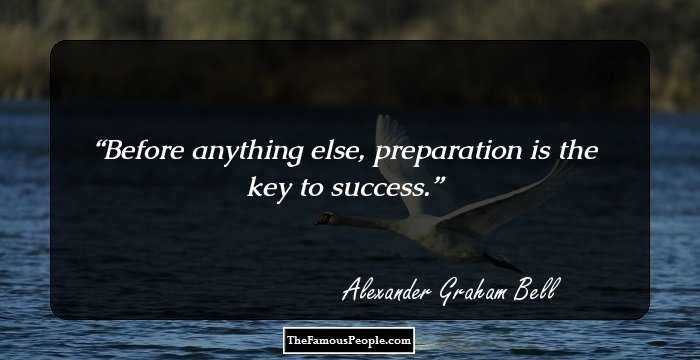 Personal Life & Legacy
In 1877, he married Mabel Hubbard, his deaf student, ten years his junior. She had become deaf at the age of five after contracting scarlet fever.
They had four children including two daughters; Elsie May Bell and Marian Hubbard Bell. Unfortunately, both their sons, Edward and Robert, died in infancy.
He died on August 2, 1922 at his private estate, Beinn Bhreagh, Nova Scotia, Canada due to complications from diabetics. On his funeral, every phone on the continent of North America was silenced in his honor for one minute.
Recommended Lists:
Engineers #1
Inventors & Discoverers #3