Alec Guinness was an English actor. He is best remembered as one of the three actors who successfully transitioned from Shakespearean theatre to Hollywood blockbusters following ‘World War II.’ Guinness developed his passion for acting, early in his life. He started his career with minor roles for theatre groups. He was then enrolled as a professional theatre actor. Guinness found his early success playing major roles in Shakespearean plays, such as ‘Hamlet,’ ‘Merchant of Venice,’ ‘Twelfth Night,’ ‘Romeo and Juliet,’ and ‘Tempest.’ He made his big screen debut in 1946 with David Lean’s film ‘Great Expectations.’ Following this, he starred in a number of ‘Ealing Comedies.’ Guinness’ collaboration with Lean proved to be a success for both the actor and the director. Lean’s 1957 movie ‘The Bridge on the River Kwai’ became a major blockbuster in Guinness’ career. Also, it won him several significant awards, including the ‘Academy Award’ and ‘Golden Globe.’ Though Guinness had established himself as a bankable actor, worldwide recognition eluded him until Lucas’s ‘Star Wars’ trilogy happened. The film series made him a household name and catapulted him to international stardom. Alec Guinness was born as Alec Guinness de Cuffe, to Agnes Cuff in Paddington, London, on April 2, 1914. There is no accurate information about the identity of his father.

Guinness completed his early education from ‘Fettes College.’ His education fee was paid by a Scottish banker named Andrew Geddes, who Guinness believed was his father. 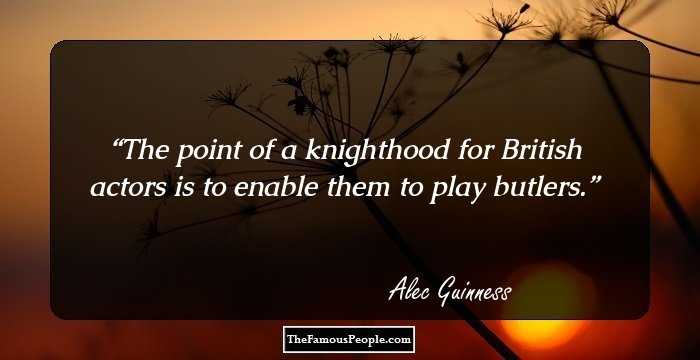 After completing his education in 1932, Alec Guinness started working as an apprentice copywriter for an advertising agency in London. It was during this time that he realized his passion for acting.

He won a scholarship to ‘Fay Compton Studio of Dramatic Art,’ following his victory in an audition held by the drama institute. Guinness’ first ever appearance in theatre was in the year 1934 for the play ‘Libel.

Following his inaugural performance at the old King’s theatre, Hammersmith, Guinness appeared in several plays, such as ‘Hamlet,’ ‘Thunder Rock,’ etc., for various theatre groups. It was during this time that he befriended many of his future friends and co-stars.

Towards the end of the 1930s, Guinness starred in a number of Shakespearean roles for Shakespearean plays, such as ‘The Merchant of Venice,’ ‘Hamlet,’ ‘Romeo and Juliet,’ ‘Twelfth Night,’ ‘Henry V,’ and ‘The Tempest.’

With the onset of ‘World War II,’ Guinness enlisted himself in the ‘Royal Navy Volunteer Reserve’ as a seaman. In 1942, he received a commission as an officer. Meanwhile, Guinness did not let go of his acting career completely and appeared in a Broadway production during his service in ‘World War II.’

Post war, Guinness resumed his career on stage. He played a variety of characters, each with conviction and élan. Besides his career as a theatre artist, Guinness commenced his film career as well. He made his maiden appearance on the big screen in 1946 with David Lean’s film ‘Great Expectations’ where he played the role of ‘Herbert Pocket.’

Following his debut on the big screen, he appeared as ‘Fagin’ in Lean’s ‘Oliver Twist’ in 1948. Next year, Guinness was applauded for playing eight different characters in the film ‘Kind Hearts and Coronets.’

The early phase of Guinness’s film career saw him feature in many ‘Ealing Comedies,’ including ‘The Mudlark,’ ‘The Lavender Hill Mob,’ ‘The Ladykillers,’ ‘The Swan,’ and ‘The Man in the White Suit.’

�In 1957, Guinness collaborated with Lean yet again for the film ‘The Bridge on the River Kwai’ in which he played the role of British POW commanding officer ‘Colonel Nicholson.’ The film won him his first ‘Academy’ and ‘Golden Globe’ award. The following year, he received an ‘Academy Award’ nomination as a screenwriter for the satirical film ‘The Horse’s Mouth.’

Guinness collaborated with Lean for a number of films wherein he played character roles, such as Arab leader ‘Prince Feisal’ in ‘Lawrence of Arabia,’ Bolshevik leader ‘Yevgraf’ in ‘Doctor Zhivago,’ and ‘Professor Godbole’ in ‘A Passage to India.’ These roles cemented his place in the industry.

After enjoying success in the 1960s, Guinness found success in the 1970s too. He appeared in many notable films, including ‘Cromwell,’ ‘Scrooge,’ ‘Hitler: The Last Ten Days,’ ‘Caesar and Cleopatra,’ and so on.

Though Guinness had already made a name for himself, international stardom eluded him until he landed the role of ‘Obi-Wan Kenobi’ in the original ‘Star Wars’ trilogy in 1977. The film catapulted him to international fame and success.

Following the success of the first film, Guinness reprised his role as ‘Obi Wan Kenobi’ in the sequels titled ‘The Empire Strikes Back’ and ‘Return of the Jedi.’ Strange as it may seem, Guinness did not enjoy working in the ‘Star Wars’ trilogy. In fact, he himself insisted on killing his character so as to end his involvement in the film series.

In 1987, he appeared as ‘William Dorrit’ in the film ‘Little Dorrit.’ His role was highly appreciated and won him nominations for best supporting actor.

In 1989, he made his final stage performance when he acted in the play ‘A Walk in the Woods’ at the ‘Comedy Theatre.’ This was his 77th performance on stage as theatre actor. His final acting role was for the TV movie ‘Eskimo Day’ in 1996. 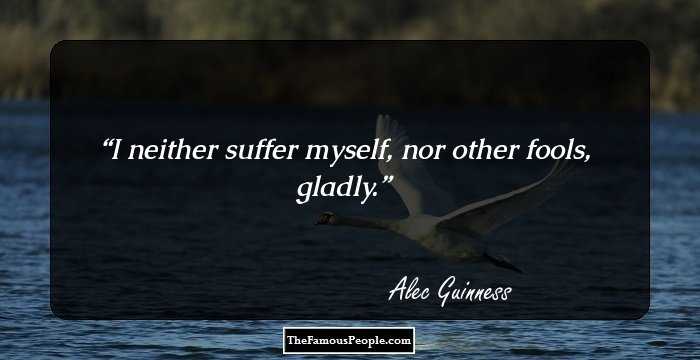 Guinness’ most acclaimed work came in 1957 with the release of the movie ‘The Bridge on the River Kwai.’ Guinness played the character of British POW ‘Colonel Nicholson’ in the film. He won the ‘Academy Award,’ ‘BAFTA,’ and ‘Golden Globe Award’ for his performance in the film.

Thanks to his theatre and film roles, Guinness had established himself as a popular actor, but his popularity didn’t cross oceans. However, in 1977, he achieved international recognition when he was roped in to play the role of ‘Obi Wan Kenobi’ in the ‘Star Wars’ film trilogy. The role gained him international fame and worldwide recognition.

For his brilliant portrayal of ‘Dylan Thomas’ in the Broadway show ‘Dylan,’ he won the prestigious ‘Tony Award.’

In 1959, he was knighted by Elizabeth II for his services to arts. The following year, he received a star on the ‘Hollywood Walk of Fame.’

In 1980, he received the lifetime achievement ‘Academy Honorary Award’ for his outstanding work in films, theatre, and television. In 1989, he was bestowed with the ‘BAFTA Academy Fellowship Award.’ 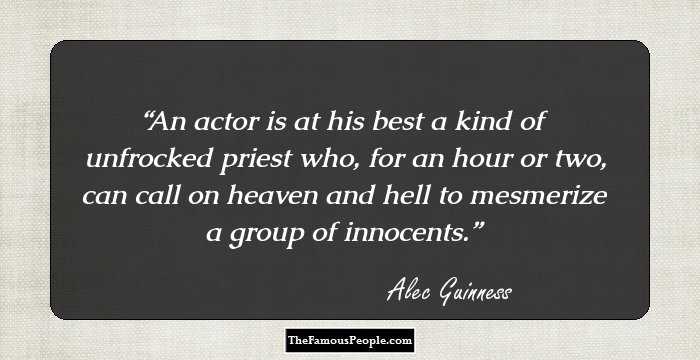 Alec Guinness married actress Merula Sylvia Salaman in 1938. The couple was blessed with a son, whom they named Matthew Guinness. Matthew went on to become an actor.

Alec died of liver cancer on August 5, 2000, in Midhurst, West Sussex. He was interred at Petersfield, Hampshire. His wife died two months later and was interred alongside him.

While filming ‘Father Brown,’ Guinness was mistaken for a real Catholic priest by a young boy. It seemed as if the clerical attire had instilled in the boy confidence and affection and that had a deep impact on the actor, so much so that in 1956, he converted to Roman Catholic Church.

Quotes By Alec Guinness | Quote Of The Day | Top 100 Quotes

See the events in life of Alec Guinness in Chronological Order