Alan Moore is the eccentric genius who created some of the world’s most marvellous comic books and graphic novels. The first British writer to work for an American comic book company, Moore is also responsible for creating adult audiences for comics. Alan Moore is widely recognised as ‘the best graphic novelist in history’ and his work continues to inspire countless number of filmmakers and aspiring comic book writers. Perhaps no other comic writer in history has managed to produce such an enormous and critically acclaimed body of work as Moore. With his unconventional looks, long mane and a wizard’s beard, Moore has played a pivotal role in bringing out the role of social responsibility into the medium of comics. His most distinguished and eminent pieces of work include, ‘Watchmen’, ‘The League of Extraordinary Gentlemen’, ‘V for Vendetta’, ‘The Saga of Swamp Thing’ and ‘From Hell’. Referred to as ‘the Orson Welles of Comics’, Moore has won numerous awards, accolades and honours for his work. Interestingly, this living legend initially began his career as a cartoonist and later realised that he is more suitable for writing. Sarah Ferguson
DID WE MISS SOMEONE?
CLICK HERE AND TELL US
WE'LL MAKE SURE
THEY'RE HERE A.S.A.P
Quick Facts

British People
Cartoonists
British Men
Tall Celebrities
Tall Male Celebrities
Childhood & Early Life
Alan Moore was born in Northamptonshire, England to working class parents Ernest Moore, who worked at a brewery, and Sylvia Doreen, a painter by profession. He was raised in the poverty stricken area of Northampton.
He attained his preliminary education from Spring Lane Primary School and it is said that he was a voracious reader since he was five years old. He spent most of his time reading British comic strips.
He later attended the Northampton Grammar School, where he first got acquainted with middle class people. He did not like the school very much and lost interest in academics.
In the 1960s, he started publishing his writings - both poetry and essays. Eventually, he established his own fanzine, ‘Embryo’. A fanzine was a non-official production of a cultural phenomenon by its fans for people with similar interest.
Subsequently, he became acquainted with the group ‘The Arts Lab’ and began to publish a significant chunk of his writing with the group. He also went on to do a lot of odd jobs to support himself. 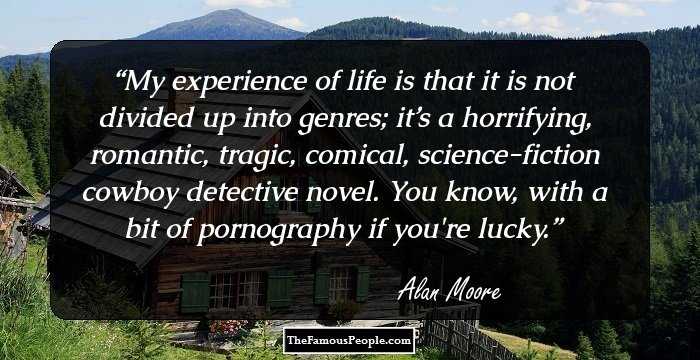 Quotes: You, Experience, Life
Continue Reading Below
Career
He quit his office job and decided that he wanted to pursue a career in illustrating and writing. Some of his works were previously published in local papers, magazines and fanzines.
His first paid publications included drawings that were published in the music magazine titled, ‘NME’. Following this, he began to write a detective series under the title, ‘Roscoe Moscow’, for the music magazine, ‘Sounds’ under the pseudonym Curt Vile.
In 1979, his comic strip titled, ‘Maxwell the Magic Cat’ was published in the ‘Northants Post’ under the pen name, ‘Jill de Ray’. He continued writing for the series until 1986. He later wrote for Britain’s most well-known magazine, ‘2000AD’.
From 1980 until the year 1984, he worked as a freelance writer and wrote for publications such as, ‘Warrior’, ‘Marvel U.K’ and ‘2000AD’. Over 50 of his stories were published in ‘Future Shocks’ and ‘Time Twisters’ of ‘2000AD’.
In 1983, ‘DC Comics’ reinvented and modified their ‘Swamp Thing’ series. Martin Pasko, who then contributed to the publication, was dismissed and the job was transferred to Moore. Meanwhile, he contributed for ‘Marvelman’ and ‘V for Vendetta’ in the Warrior magazine as well.
In 1983, he contributed for the comic strip ‘Skizz’, which was a ‘2000 AD’ publication. The same year, he also created the comic strip titled, ‘D.R. & Quinch’ and wrote for ‘Captain Britain’, a Marvel UK publication.
In August 1983, he created the comic story series titled, ‘The Bojeffries Saga’ that was published in the U.K comic anthology, ‘Warrior’.
Meanwhile, he tried his hand at music in 1983, and founded the band, ‘The Sinister Ducks’ with David J. The duo came out with the single, ‘March of the Sinister Ducks’. The following year he also wrote the song, ‘Leopardman At C&A’ for the album, ‘We Have You Surrounded’ for Mick Collins.
Later in 1983, the superlative success of the ‘Swamp Thing’ series brought critical and commercial acclaim for both him and the publications and resulted in the further association between the two. He created the legendary horror comic book series titled, ‘Hellblazer’ for the publication.
Continue Reading Below
In 1985, he created the ‘DC Comics’ story, ‘For the Man Who Has Everything’, featuring the legendary character, ‘Superman’. His ‘Superman’ stories soon became a favourite among readers.
In 1986, he came out with another ‘Superman’ story titled, ‘Whatever Happened to the Man of Tomorrow?’ This was published in two parts - first in the ‘Superman # 423’ and later in ‘Action Comics #583’.
In September 1986, he came out with the graphic novel titled, ‘Watchmen’, which was published by ‘DC Comics’. In this piece of work he was critical of the concept of a superhero.
Lack of creator’s right in British media made him increasingly concerned which led him to quit writing for all British publishers. By 1986, he had quit writing for ‘2000 AD’ as well.
In March 1988, ‘DC Comic’ published his superhero graphic novel titled, ‘Batman: The Killing Joke’. This publication also introduced the character, ‘The Joker’.
By 1989, he resigned from ‘DC Comics’ as well, for he was unhappy with the payment methods. He later set up his own publishing company named, ‘Mad Love’ along with his wife Phyllis and Deborah Delano.
He collaborated with a number of artists and writers to publish the one-off comic’s anthology, ‘AARGH’, elaborated as Artists Against Rampant Government Homophobia. This was Mad Love’s first publication
In 1991, his graphic novel, ‘A Small Killing’ was published by Victor Gollancz Ltd. The entire novel was illustrated by Argentine born artist and illustrator, Oscar Zarate.
Later in 1991, he came out with the sexually explicit graphic novel, ‘Lost Girls’. The plot of this novel was centred on three female characters living in the late 19th and early 20th century.
Continue Reading Below
In 1996, he published his debut novel, ‘Voice of the Fire’, which consisted of twelve chapters. The story was set in Northampton, England in the time frame of 4000 BC until present day.
In 1999, his acclaimed and famous graphic novel, ‘From Hell’ was published. The novel was illustrated by Eddie Campbell. Same year, his comic book series, ‘Promethea’ was published as well.
Published in 1999, his creation, ‘The League of Extraordinary Gentlemen’ continues to thrive. He also created the comic book, ‘Tom Strong’ and the superhero comic book, ‘Top 10’.
In 2006, the complete edition of the graphic novel ‘Lost Girls’ was released. The following year, he was seen in animated form on an episode of, ‘The Simpsons’.
In 2012, the third volume of ‘The League of Extraordinary Gentlemen’ was released. Currently, he is reportedly working on his second novel, ‘Jerusalem’ and an occult textbook, ‘The Moon and Serpent Bumper Book of Magic’. 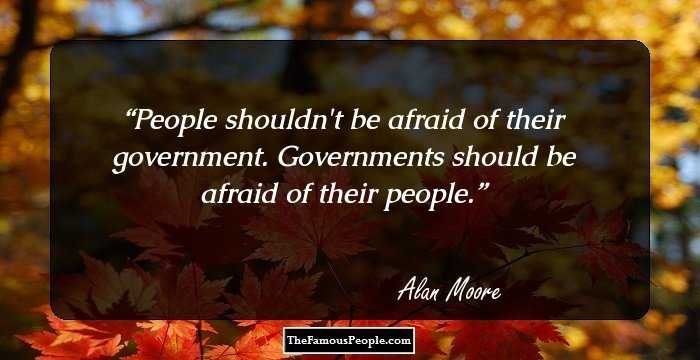 Major Works
His graphic novel, ‘Watchmen’ is regarded as one of his ground-breaking works and also one of the best comic books to have ever been written. The novel was a massive commercial success and also received critical acclaim.
His ‘The League of Extraordinary Gentlemen’ was made into a film in the year 2003. Volume I also received the Bram Stoker Award for ‘Best Illustrated Narrative’. ‘Time Magazine’ listed the second volume of his comic as the ‘9th Best Comic of 2003’.
Awards & Achievements
In 1985, he was the recipient of the Jack Kirby Award for ‘Best Single Issue’ for ‘Swamp Thing Annual No. 2’.
In 1985, 1986 and 1987, he won the Jack Kirby Award for ‘Best Continuing Series’ for ‘Swamp Thing’ and ‘ Best Writer’ for ‘Swamp Thing’ in 1985 and 1986.
In 1986, he was the recipient of the Eagle Award for ‘Watchmen’ and ‘Swamp Thing’.
In 1987, he received the Jack Kirby Award in the category of ‘Best Writer’ for ‘Watchmen’. 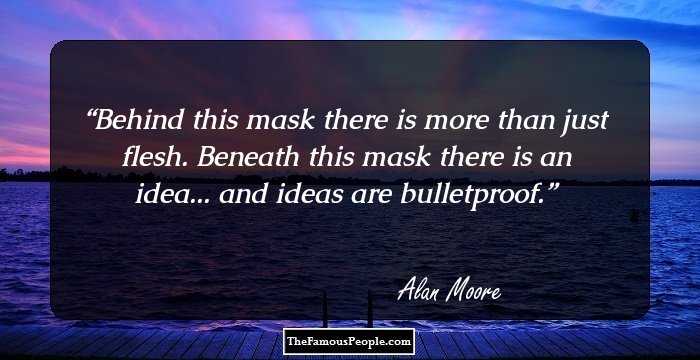 Personal Life & Legacy
In 1971, he became romantically involved with Phyllis. The couple began to live together in an apartment in Northampton. They eventually got married and had two daughters.
In the early 1990s, his wife Phyllis left him and in the year 2007, he married comic artist, Melinda Gebbie.

See the events in life of Alan Moore in Chronological Order