Alan Minter is a former English professional boxer who claimed to fame in 1971, winning the Amateur Middleweight Championship. Following year, he won a bronze medal at the Munich Olympic Games. Nicknamed Boom Boom, Minter’s career graph is marked with great highs. He started with a bang, winning his first eleven matches of which the first five were by knockout. From 1974 to 1977, he won thirteen consecutive matches of which eight came by knockout. At the time of his retirement, his boxing record stood at 39 wins (23 wins by knockout), 9 losses and 1 no contest. In addition to winning the Britain and Europe Middleweight Championship title, he won World Middleweight Championship title as well. In his decade long career, he defeated many well-established boxers including Emile Griffith, Vito Antuofermo, Tony Licata, Ernie Singletary, Gratien Tonna, Angelo Jacopucci, ‘Sugar’ Ray Seales and Kevin Finnegan. His greatest weakness during the fights was his tendency to get cut Trevor Goddard
Boxers #364
Sportspersons #7032
DID WE MISS SOMEONE?
CLICK HERE AND TELL US
WE'LL MAKE SURE
THEY'RE HERE A.S.A.P
Quick Facts 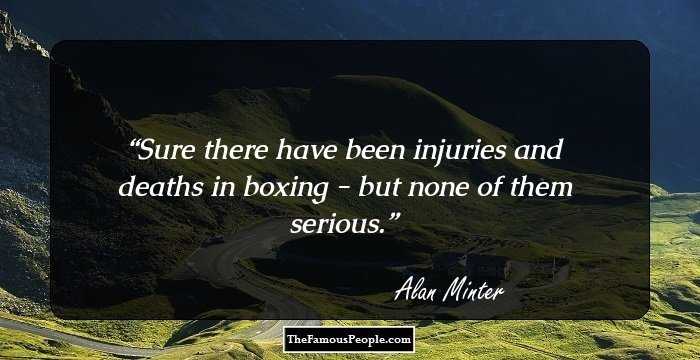 The Hottest Male Celebrities With The Best Abs
Career
Minter’s entry into the world of boxing came in extremely early. In 1971, merely 20 years old, Minter first tasted success by becoming the Amateur Boxing Association of England Middleweight Champion.
He made his professional debut on October 31, 1972 against Maurice Thomas. Minter had the ideal start to his professional career as he defeated Thomas by knockout in the 6th round. Same year, he won a bronze medal at the 1972 Munich Olympic Games.
Minter was on a roll early in his career. After his debut victory, he went on to record ten more wins. Interestingly, his first five victories came by knockout. In 1973, Pat Dwyer became the first fighter who dared to go the length with him up till the eighth round. Minter however won the fight.
His professional boxing career’s dream start suffered from its first blow on June 5, 1973 against fighter Don McMillan, thus recording Minter’s first loss. The fight was stopped by the referee in the eighth round after Minter sustained severe cuts from McMillan.
Following his loss to McMillan, he resumed his winning spree, recording back to back victories against Octavio Romero and Ernie Burns. However, the success extravaganza ended after he lost to Jan Magdriarz successively on October 30 and December 11 in the eighth and sixth round respectively. He lost both the fights due to cuts.
Year 1974 brought forth mixed results for Minter’s career. Though it opened with a victory against Tony Byrne in the eighth round, he lost the successive match against Ricky Ortiz in round two. He once more faced Jan Magdriarz but this third fight of the two boxers ended with a draw. He finished the year with a win against Shako Mamba.
Minter’s career scaled new peaks in 1975. After recording four straight wins, he challenged Kevin Finnegan for the British Middleweight title. The fight against Finnegan lasted for fifteen rounds at the end of which he was declared the winner. With this, Minter safely secured the Britain’s Middleweight Championship title.
Taking his 1975’s success story forward, he recoded six victories in 1976, eventually taking his winning streak to ten consecutive wins. He successfully defended his British title twice against Billy Knight and Kevin Finnegan. The unbeatable year helped Minter bag a seat in the top ten Middleweight challengers of the year.
On February 4, 1977, he defeated Germano Valsecchi in the fifth round by knockout. This success helped him bag the European Middleweight Championship title as well. The undefeated status finally ended on April 12, 1977 when he lost to Ronnie Harris in round eight. However, he bounced back with a win against Emile Griffith, thus retaining his seat in top ten Middleweight challengers.
Continue Reading Below
On September 21, 1977, he lost the fight against Gratien Tonna in the eighth round and with it his European Middleweight Championship title as well. However, he retained his Britain title, by winning against Finnegan in a 15 round decision.
In 1978, he won all the three fights lined up for the year. His fight against Angelo Jacopucci which resulted in his favour after 12 rounds knockout helped him regain his European Middleweight Championship. In the match against Gratien Tonna, he successfully retained his championship title.
In 1979, he won all the four matches of the season, of which two victories came by knockout, against Renato Garcia and Monty Betham in round 9 and 2 respectively.
The highpoint in his career came in 1980 when he was given a chance at World Middleweight Championship against Vito Antuofermo. Much to his delight, he won the fight in a fifteen round match in Las Vegas thus holding on to the World Middleweight Championship title for the first time.
In the aftermath of his victory against Antuofermo and his subsequent World Middleweight Championship title, a rematch was held which he won yet again by a TKO in eight rounds. He lost the next match to Marvin Hagler on September 27, due to cuts sustained in round three.
In 1981, he faced three fights of which he won once against Ernie Singletary in round 10. With this victory, he successfully retained his Britain and European Middleweight Championship. However, he lost the next two fights against Mustafa Hamsho and Tony Sibson. Following his defeat, he retired from boxing.
Major Works
Minter’s super successful career witnessed him fight in 49 matches of which he won 39; 23 of those victories by knockout. Minter’s career never had a low phase; he began by winning the Amateur Middleweight Championship in 1971 and went on to win a bronze medal in 1972 Olympic Games.
Minter won Britain Middleweight Championship in 1975 and European Middleweight Championship in 1977. He thrice retained Britain Middleweight Championship and twice European Middleweight Championship. He won the World Middleweight Championship in 1981 and retained it twice.
Personal Life & Legacy
Not much is known about his personal life other than the fact that he has a son, Ross ‘The Boss’ Minter, also competes in the welterweight division and is the current English and British (Southern Area) Welterweight Champion. His record stands at 17 wins (8 KO), 2 losses and 1 draw.
He currently resides in Littlehampton, England and tours the UK with Jim Watt attending autograph and lecture shows.
Trivia
This former English professional boxer is popularly known by the nickname Boom Boom
You May Like

See the events in life of Alan Minter in Chronological Order 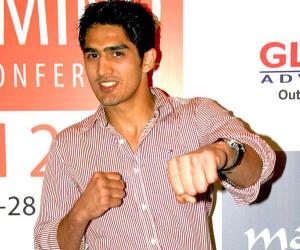