(Actor Known for His Roles in Disney Studios Films: 'The Mighty Ducks' Series and 'Newsies')

Aaron Lohr is an American actor and singer. He has appeared in several ‘Disney’ movies, including ‘The Mighty Ducks’ and ‘Newsies.’ Lohr began acting after completing his majors in theatre. He is best known for his role as ‘Dean Portman’ in ‘D3: The Mighty Ducks.’ He played a prominent role in the TV series ‘Bustin’ Loose.’ He lent his voice to ‘Max’ in the animated movie ‘A Goofy Movie.’ He portrayed the ‘Dancing Boy’ in the music video of the song ‘Let’s Hear It for the Boy.’ He starred in ‘Rent,’ the film adaptation of the ‘Broadway’ musical of the same name. Lohr performed as ‘Marlon Baker’ in the series ‘Sister, Sister.’ He was seen in several TV series, such as ‘Law & Order,’ ‘White Collar,’ Blue Bloods,’ and ‘The Mentalist.’ Lohr had a strong association with the ‘New York Public Theater.’ Lohr debuted at the ‘Public Theater’ with the musical ‘Radiant Baby.’ After this, he appeared in several roles in the musical ‘See What I Wanna See.’ He also performed in the plays ‘In Darfur’ and ‘Bare: a Pop Opera.’ **Childhood & Early Life Ezra Miller
7th April In History
DID WE MISS SOMEONE?
CLICK HERE AND TELL US
WE'LL MAKE SURE
THEY'RE HERE A.S.A.P
Quick Facts 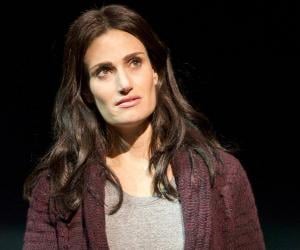 American People
California Actors
University Of California, Los Angeles
Aries Actors
American Actors
Childhood & Early Life
Aaron Lohr was born on April 7, 1976, in Los Angeles, California. Lohr graduated from the ‘University of California, Los Angeles’ in ‘Theater.’ He has a Master’s degree in criminal Justice from ‘John Jay College,’ New York City, and a Master’s degree in Psychology, from the ‘Phillips Graduate University.’
Continue Reading Below
Career
In 1984, Aaron Lohr made his acting debut by portraying a young boy in the short film ‘Deniece Williams: Let’s Hear It for the Boy.’ In 1985, he appeared in the medical drama series ‘St. Elsewhere,’ as a boy. In the next few years, he played minor characters in series such as ‘Throb’ and ‘What a Country.’
In 1987, he bagged an important role in the sitcom ‘Bustin’ Loose.’ Jimmie Walker played the lead role in the series. It was the story of a con artist, who was forced to live with four orphans. In the series, Lohr performed as ‘Nikky Robinson,’ who was one of the orphans. The series was cancelled after one season.
In 1988, he lent his voice to several characters in the animated movie ‘Fantastic Max.’ In the same year, he gave his voice in the animated movie ‘Scooby-Doo and the Ghoul School.’
In 1990, he lent his voice to several characters in the TV special, ‘Cartoon All-Stars to the Rescue.’
In 1990, Lohr appeared in an episode of the series ‘Baywatch.’ In the same year, he performed as a voice actor in the animated TV series ‘Peter Pan and the Pirates.’ In 1991, he appeared in single episodes of the series ‘The Wonder Years’ and ‘Blossom.’
In the 1990s, Aaron Lohr performed in several movies produced by the ‘Disney Studio.’ In 1992, he performed as ‘Mush Meyers’ in the ‘Disney’ movie ‘Newsies.’ It was a musical comedy film. In 1994, he portrayed a hockey player, ‘Dean Portman,’ in the sports comedy movie ‘D2: The Mighty Ducks.’ He performed the same character in the sequel, ‘D3: The Mighty Ducks.’ In 1995, Lohr lent his voice to the animated movie ‘A Goofy Movie.’ It was produced by the ‘Disney MovieToons.’ In the movie, Lohr provided singing voice to the main character, ‘Max Goof.’
From 1994 to 1997, Aaron Lohr performed in four episodes of the sitcom ‘Sister, Sister.’ It was aired on the ‘ABC’ network. The show told the story of twin sisters who were separated at birth. In the series, Lohr performed as ‘Marlon Baker,’ a high school student and a member of the school hockey team. In 1997, Lohr performed in two episodes of the fantasy series ‘Teen Angel.’ In 2000, Lohr starred as ‘Micky Dolenz’ in the TV movie ‘Daydream Believers: The Monkees’ Story.’
Aaron Lohr was a theater actor, too. He was associated with the ‘New York Public Theater’ for a long time. In 2003, Lohr made his debut at the ‘Public Theater’ in the musical ‘Radiant Baby.’ Later, he played several roles in the musical ‘See What I Wanna See.’ He performed as ‘Matt’ in the play ‘Bare: a Pop Opera.’ He also performed in the political drama play ‘In Darfur.’
In 2005, Aaron Lohr performed as ‘Steve’ in the musical drama movie ‘Rent.’ It was an adaptation of the ‘Broadway’ musical of the same name. In 2009, Lohr performed as ‘John’ in the TV movie ‘Loving Leah.’ It was aired on the ‘CBS’ network.
Aaron Lohr has a ‘Drug and Alcohol Counseling Certification’ from the ‘UCLA.’ He is currently serving as a therapist and group facilitator at the ‘Avalon Malibu Residential Mental Health and Addiction Treatment Center.’
Family & Personal Life
Aaron Lohr is married to actress Idina Menzel. The couple worked together in the movie ‘Rent’ and the musical ‘See What I Wanna See.’ They got engaged in 2016, and married in September, 2017. They do not have any children.

See the events in life of Aaron Lohr in Chronological Order