There have been many teen stars, but one of the few who have stood out in the recent years is Zac Efron. Interested in acting from a young age, he was an active participant in his high school’s stage productions. After several guest appearances on television, it just took one television movie to change Efron’s career graph and establish him as a star. The movie was The Disney Channel's tween pop cultural phenomenon ‘High School Musical’ and it catapulted Efron to great fame and popularity. From a small start in the first movie, to the successful trilogy, ‘High School Musical’ won rave reviews for the actor and also got him critical appreciation. After being a teen heart throb for a long time, Efron made the leap to mainstream cinema with the hit movie, ‘Hairspray’. After playing the lead in this movie, he appeared in several movies, such as, ‘17 Again’ and ‘The Lucky One’ through which he established himself as a talented and versatile actor. Since then, he has done several movies in different genres like ‘Me and Orson Welles’ and “Charlie St. Cloud’. With each film Efron has proved his mettle by making a smooth transition from a Disney channel teen heartthrob to a respectable mainstream Hollywood actor. American People
California Actors
Libra Actors
American Actors
Actors Who Are In Their 30s
Childhood & Early Life
Zac Efron was born in San Luis Obispo, California, to David Efron, an electrical engineer at a power plant and Starla Baskett, who used to work as a secretary at the same power plant. He has a younger brother, Dylan.
A bright student at school, Efron was pushed by his father to act when he was just eleven years old. This led him to work in theatre productions during high school performing in ‘The Great American Melodrama’ and ‘Vaudeville’.
After appearing in shows like ‘Gypsy’, ‘Peter Pan or The Boy Who Wouldn't Grow Up’, ‘Little Shop of Horrors’ and ‘The Music Man’, his drama teacher recommended him to an agent and eventually Efron was signed to the Creative Artists Agency.
In 2006, he graduated from Arroyo Grande High School and was accepted to the University of Southern California. However, he deferred from his course to concentrate on his film career. He also attended the community college ‘Pacific Conservatory of the Performing Arts’. 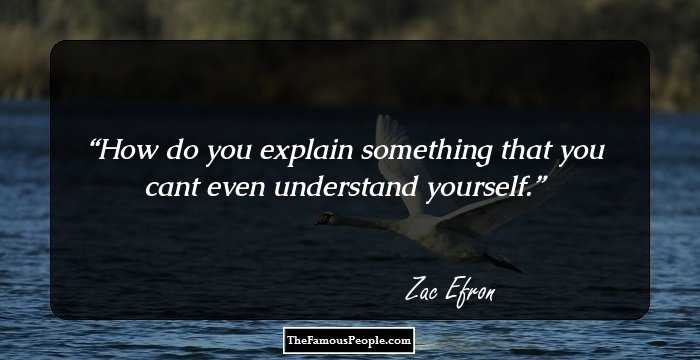 Quotes: You, Yourself
Continue Reading Below
Career
Starting as a guest star on television, Efron was first seen in 2002 in several television series like ‘Firefly’, ‘ER’ and ‘The Guardian’. The next year he was seen in the television movie, ‘Miracle Run’ for which he won a lot of critical acclaim.
In 2004, he became a permanent cast member on the show ‘Summerland’ after several guest appearances. A year later, he was seen in the music video ‘Sick Inside’ by Hope Partlow. That year, he was also seen in the movie ‘The Derby Stallion’.
‘High School Musical’ was Efron’s big break into the movie industry. The film was released in 2006 and he became famous among the teenage audience. Soon, the songs from the film released and some of them became hits including ‘Get'cha Head in the Game’ and ‘Breaking Free’.
In 2007, he appeared in an episode of ‘Punk’d’. He was also seen in the single ‘Say OK’ by Vanessa Hudgens. That year, his film ‘Hairspray’ also released for which he recorded his own vocals. ‘High School Musical 2’ was aired the same year and his popularity surged.
In 2008, he played the lead in the film ‘Me and Orson Welles’. He also made an appearance in ‘High School Musical 3: Senior Year’.
He was next seen in ‘17 Again’ in 2009 which was a comedy-drama film. He also appeared in a short comedy video ‘Zac Efron’s Pool Party’ which was released online. The same year, he also hosted an episode of ‘Saturday Night Live’.
In 2010, his film ‘Charlie St. Cloud’ was released. He also did several commercials to promote the ‘MTV Movie Awards’.
He was seen in the successful film ‘New Year’s Eve’ in 2011 and the following year, he starred in the adaptation of Nicholas Spark’s novel ‘The Lucky one’. The same year, he played important roles in ‘The Paperboy’, ‘At Any price’ and ‘Liberal Arts’.
In 2013, he appeared in ‘Parkland’ as Dr. Charles James. Next year, he will be seen in the films ‘Townies’ and ‘Are We Officially Dating?’
In 2014, he was seen in the comedies: 'That Awkward Moment', alongside Miles Teller and Michael B. Jordan' and 'Neighbors' with Seth Rogen.
Major Works
‘The High School Musical Trilogy’ was a breakthrough for Efron which catapulted him to great fame. The film series was a huge commercial success.
Awards & Achievements
In 2009, he won the ‘Teen Choice Award’ and ‘MTV Movie Award’ in the category ‘Best Male Performance’ for his work in ‘High School Musical 3: Senior Year’.
He won the ‘People’s Choice Award’ in the category ‘Favourite Dramatic Movie Actor’ for the films, ‘The Paperboy’ and ‘The Lucky One’ in 2013.
Personal Life & Legacy

Efron was rumoured to have an affair with Vanessa Hudgens and they started dating in 2005. The relationship ended five years later in 2010.

Zac Efron reportedly dated model Vanessa Valladares for a short time in the summer of 2020.

See the events in life of Zac Efron in Chronological Order