(Comedian and Writer Known for Her TV Series "The New Adventures of Old Christine" and "Curb Your Enthusiasm.")

Wanda Sykes is an American comedian and actress best known for her role as ‘Barbara Baran’ in ‘The New Adventures of Old Christine.’ She is counted among the funniest women in America. Though she is a popular comedian today, she did not even think of a career in comedy during her growing up days. Growing up in a comfortable middle class locality, she wanted to attend college and secure a respectable job. She attended the ‘Hampton University’ and was employed by the ‘National Security Agency’ (NSA) upon her graduation. But this work gave her no satisfaction and she decided to try her hand at stand-up comedy. She moved to New York City to pursue her new found interest and got her big break when she was given an opportunity to open for comedian Chris Rock at ‘Caroline’s Comedy Club.’ Meeting Chris Rock was a turning point in her life; she was soon hired to write for ‘The Chris Rock Show’ and won an ‘Emmy Award’ for her writing. Gradually, she started appearing in movies and went on to play important roles in comedies like ‘Down to Earth’ and ‘Pootie Tang.’ She is openly gay and an active supporter of same-sex marriages and gay rights activism. American People
Stand-up Comedians
Black Stand-up Comedians
Black Film & Theater Personalities
American Women
Childhood & Early Life
Wanda Yvette Sykes was born on 7 March 1964, in Portsmouth, Virginia, USA, to Marion Louise and Harry Ellsworth Sykes. Her father was a U.S. Army colonel, while her mother was a banker.
She graduated from ‘Arundel High School’ and attended ‘Hampton University’ from where she earned a bachelor’s degree in marketing. She was a member of ‘Alpha Kappa Alpha.’ 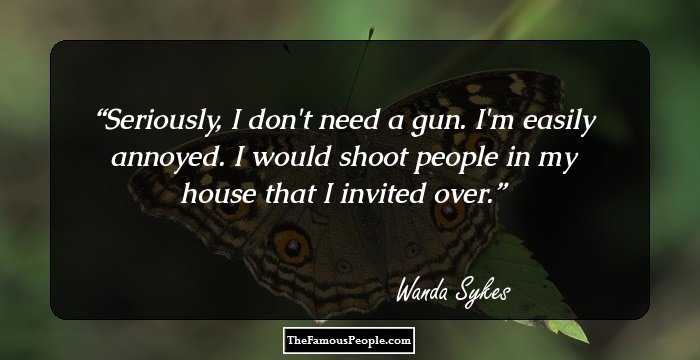 Quotes: Need, I
Continue Reading Below
Career
She started her career as a procurement officer at the ‘National Security Agency’ (NSA) after her graduation. She held this government post for five years. However, this job did not provide her much satisfaction.
She participated in the ‘Coors Light Super Talent Showcase’ in 1987 where she performed stand-up comedy for the first time in front of a live audience. It was during this performance that she realized her love for comedy.
She spent the next few years honing her skills. She moved to New York City in 1992 in order to pursue a career in comedy.
She met comedian Chris Rock and opened for him at the ‘Caroline’s Comedy Club.’ Subequently, she joined the writing team of ‘The Chris Rock Show’ in 1997. Her collaboration with Chris Rock proved to be very productive and she also got the opportunity to make several appearances on his show.
Starting from 2001, she made several appearances on various episodes of the improvised comedy television series ‘Curb Your Enthusiasm.’
She played ‘Biggie Shorty’ in the 2001 comedy film ‘Pootie Tang’ which also starred Chris Rock. The movie was adapted from a comedy sketch that was first performed on ‘The Chris Rock Show.’
She starred as ‘Wanda Hawkins’ in the sitcom ‘Wanda at Large’ which ran on the Fox network for two seasons in 2003. She was also the creator of the show. She portrayed an outspoken stand-up comedian who is chosen as a correspondent for a political talk show.
In 2004, she appeared as herself in the television show ‘Wanda Does It’ which depicted a day in the life of the comedian.
She authored a humorous book titled ‘Yeah, I said It’ in 2004. The book featured a collection of jokes and rants about diverse subjects like sex, politics, family, crime, war, race, etc.
Continue Reading Below
She made several appearances as ‘Barb Baran’ in the sitcom television series ‘The New Adventures of Old Christine,’ first in a recurring role and then as main cast member from 2006 to 2010.
She voiced ‘Bessy the Cow’ in the animated show ‘Back at the Barnyard’ in 36 episodes from 2007 to 2011.
She hosted a talk show titled ‘The Wanda Sykes Show’ on Fox Channel from November 2009 to May 2010.
She voiced the character of a school therapist in ‘What Animated Women Want,’ one of the episodes of ‘The Simpsons,’ in 2013.
Meanwhile in 2012, she voiced the character of ‘Granny’ in the computer animated adventure film ‘Ice Age: Continental Drift.’ She then reprised the role in the film’s 2016 sequel ‘Ice Age: Collision Course.’
From 2013 to 2019, she has had recurring roles in series, such as ‘Alpha House,’ ‘Black-ish,’ ‘Broad City,’ ‘Harley Quinn,’ and ‘The Other Two.’
From 2015, Sykes has been part of many comedy movies, such as ‘Bad Moms’ (2016), ‘Snatched’ (2017), ‘A Bad Moms Christmas’ (2017), and ‘Ugly Dolls’ (2019).
Meanwhile in 2017, she started voicing ‘Gregoria the Gargoyle’ in the Disney animated Halloween fantasy musical TV series ‘Vampirina.’
In 2019, she was seen playing ‘Janet’ in Robert Luketic's romantic comedy film ‘The Wedding Year.’ The same year, she was also part of ‘Jexi’ in which she played ‘Denice.’ Her upcoming films include ‘Friendsgiving’ and ‘Breaking News in Yuba County.’
Continue Reading Below 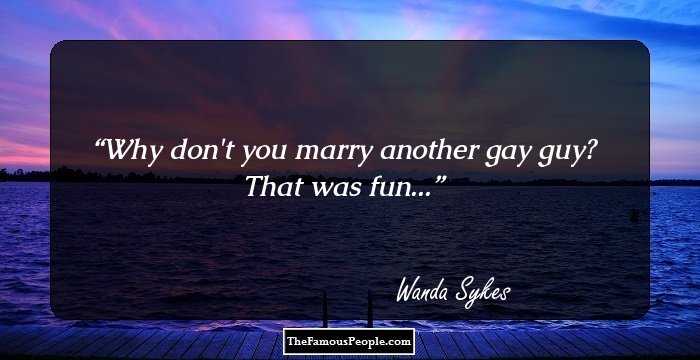 Quotes: You
Major Works
Her best known role is that of ‘Barb Baran’ in the sitcom series ‘The New Adventures of Old Christine’ where she played the protagonist’s funny best friend. ‘Barb Baran’ was initially a recurring character which later became part of the main cast because of Wanda Sykes’ popularity.
She wrote 30 episodes of ‘The Chris Rock Show.’ Her writing was widely appreciated and won her several nominations and awards.
Awards & Achievements
She won the ‘Primetime Emmy Award’ for ‘Outstanding Writing for a Variety, Music or Comedy Program’ in 1999 for ‘The Chris Rock Show.’
She was presented with the ‘American Comedy Award’ for ‘Funniest Female Stand-Up Comic’ in 2001.
She is also the recipient of Comedy Central’s ‘Commie Award’ for ‘Funniest TV Actress’ (2003). 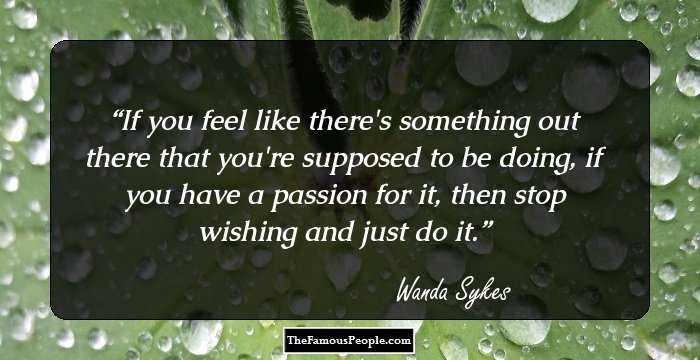 Quotes: You, Like
Personal Life & Legacy
She married Dave Hall in 1991 and divorced him in 1998.
She publicly came out as lesbian in 2008 and married her girlfriend Alex Niedbalski. The couple has two children (fraternal twins).
She is a supporter of gay rights and same-sex marriages. She also volunteers with PETA.
Trivia
She was the first African American woman to become a featured entertainer for the annual White House Correspondents’ Association dinner.

See the events in life of Wanda Sykes in Chronological Order