Maria Shriver
Walter Winchell was one of the famed names in the American entertainment and media industry. Be it for his spicy gossip about famous stars or unravelling the deep hidden secrets of influential personalities, he was notorious in every way he could. He gave journalism a new direction with his fiery columns that gave a detailed insight into the life and profile of the subject in question to the readers. As if this was any less of a hassle caused to the who’s who of the industry, his radio broadcasts gave a detailed peek-a-boo of the show business. Unlike other journalists or columnists, Walter Winchell was a self-made man. Coming from an impoverished background, he did not let the same to conquer his life and worked hard to earn a life of dignity and pride. His shot to fame came with the column, ‘Mainly About Mainstreeters’ which provided hidden news and spicy gossip about the artists. Though he was banned and criticized by traditionalists and conventional journalists, the column made him a household name. His columns soon became the top favourite of readers and in no time, were being printed by 2000 newspapers and had a total of more than 50 million readers. His radio shows were also strikingly popular with the people and garnered 20 million listeners.

British Men
Male Journalists
American Journalists
Male Media Personalities
Childhood & Early Life
Walter Winchell was born on April 7, 1897 to Jacob Winschell and Jennie Bakst in New York City. His father belonged to a family of Russian immigrants. He had a younger brother Algernon.
Young Winchell spent his early years in extreme poverty, due to the lazy and languid attitude of his father.The family was constantly on the move and in need of money.
He gained education until the sixth grade after which he dropped out to take up odd jobs to meet the monetary needs of the family. He worked at the butcher shop, as a newspaper boy, sold subscription and rendered his services for a charge.
He along with his friends formed the band, Imperial Trio. It was through this that he landed himself for a new Vaudeville show put on by Gus Edwards, called ‘Gus Edwards' 1910 Song Revue’. 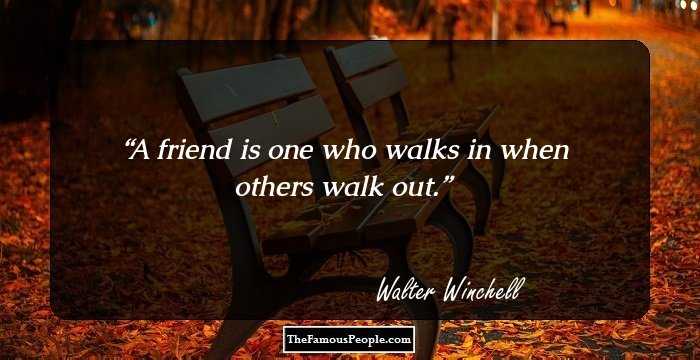 American Media Personalities
Aries Men
Career
The exposure in the vaudeville show opened new gateways for him to explore. No sooner he made a plunge for a career in journalism by posting notes about his acting troupe on bulletin boards.
In 1920, he joined the Vaudeville News. From being a layman he turned into being a complete journalistic entertainer and a showman. He learned the tricks of the trade soon and the ways to draw the attention of the audience.
In 1924, he left Vaudeville News to bag a position at the then newly launched tabloid newspaper, The New York Evening Graphic. The transition to mainstream journalism turned out to be an easy one for him due to his skills and talent.
What differentiated him from other journalists of his time was his care-a-damn attitude! He exploited the life of those known and brought out the dirty tit bits to the world. He was condemned by conservatives and traditionalists but he took their criticism in his stride.
His leap of fame came when he published a column on the paper entitled, ‘Mainly About Mainstreeters’. The column provided an insight into the lives of actors, director and producers and criticized the plays he detested.
Though he was banned from several theatres post the publication of his column, but slowly and gradually he became more famous than those personalities that he had written about in his column.
In 1929, he was offered a position by the New York Daily Mirror. With the same, he turned to become author of the first ever syndicated gossip column, On-Broadway.
Using his contacts and connections, he leaked out, both exciting and embarrassing information about famous personalities in the field of entertainment, government and social circles. No sooner he became a cause of fear for famous, powerful and influential people who dreaded being exposed by him.
In 1930, he made his debut in radio over WABC in New York, a CBS affiliate. The show entitled, ‘Saks on Broadway’ was a 15-minute feature that provided business news about Broadway.
Continue Reading Below
In 1932, he was roped in by the NBC’s Blue Network to host ‘The Jergens Journal’, which was another 15 minute show that mixed entertainment news with matters of national importance.
Throughout the 1930s, he earned much name and fame especially for his coverage of the Lindbergh kidnapping and subsequent trial which received national attention. No sooner, his column was being read by 50 million readers as it was syndicated by 2000 newspapers. His radio career was also booming as he was heard by 20 million people from 1930s to 1950s.
He was an ardent supporter of Franklin Roosevelt’s administration and openly criticized and attacked Adolf Hitler and other Nazi organizations. He even served as the mouthpiece of the Roosevelt government.
At the beginning of the World War II, he denounced Communism and became a candid supporter of civil rights for African-Americans. He even openly attacked the National Maritime Union by claiming that it was run by Communists.
In 1948, his show on radio became the top rated show surpassing that of Fred Allen and Jack Benny. In 1950s, he took up a weekly radio broadcast on ABC television but ended the same after a dispute with ABC executives in 1955.
His career graph witnessed a downward plunge as television soon became a powerful medium, surpassing the popularity of print and radio. Though he was offered to host a variety show by NBC, it lasted just for thirteen weeks.
His career of a columnist also began to fade as the readership dropped steeply. In 1963, the newspaper, New York Daily Mirror shut down, eventually ending his thirty-four years of service. Soon, he faded from the public life.
His last assignment was that of a narrator for ABC television networks’ ‘The Untouchables’ that lasted for four seasons beginning from 1959.
He announced his retirement in 1969, citing the suicide committed by his son and the failing health of his wife as the major reason.
Continue Reading Below 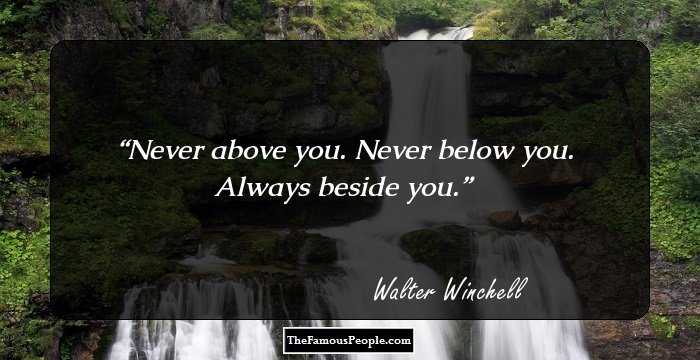 Quotes: You, Never, Relationship
Awards & Achievements
He was posthumously inducted in the Radio Hall of Fame in 2004.
Personal Life & Legacy
He tied the nuptials with Rita Greene, his onstage partner on August 11, 1919. The marriage did not last long as the couple separated after a couple of years.
He subsequently started living in with June Magee who bore him a daughter- Walda. To abstain from the charges of illegitimacy, he and Magee maintained to be married, a secret which they successfully kept all through their lives.
He legally divorced his wife Greene in 1928. He fathered three more children from his relationship with Magee but none of his children lived long.
The greatest tragedy hit him when his only son, Walter Jr committed suicide in his family's garage on Christmas night, 1968. Two years later, his wife/live-in partner breathed her last at Phoenix hospital following failing heart condition.
He spent his final two years in recluse at the Ambassador Hotel in Los Angeles. He breathed his last on February 20, 1972 due to prostate cancer. He was 74 at the time of his death. He was buried in Greenwood Memory Lawn Cemetery in Phoenix. 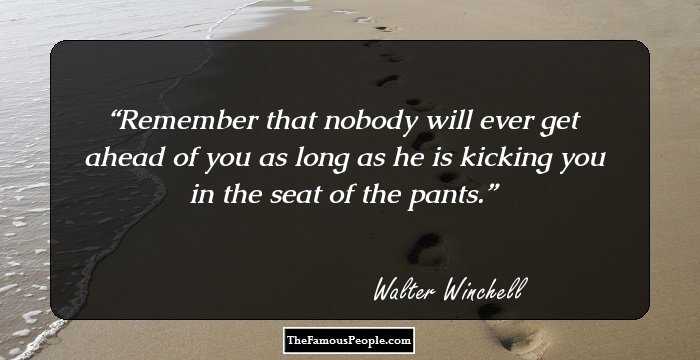 Quotes: You, Will
Trivia
This American gossip columnist and radio commentator, who uncapped the sealed and wrapped secrets of famous and influential personalities, successfully maintained his live-in relationship with June Magee a secret all through his life.
You May Like

Quotes By Walter Winchell | Quote Of The Day | Top 100 Quotes

See the events in life of Walter Winchell in Chronological Order