If music is the food for your soul then Tyler Brown is one guy you would have definitely bumped into while spending time on YouTube. This teenager has created a niche for himself by uploading cool and funky music videos on his personal account. The best part of his clips that have attracted an insane number of subscribers is the fun element that he brings into his videos. They bring out such a surge of energy in you that there is absolutely no way that you won’t be tapping your feet five minutes into his videos. Not only does this Californian boy have a huge following on YouTube but also on Instagram, where the number of people who are following his every move is over 500,000. This Aquarian born super star has such a huge name in the market of stardom that all his fans are addressed as ‘Tyler’s Brownies’. Now isn’t that enough to get a slight idea of what an impact this teenager has on the youth of today? Though Tyler brown would pass off as any other American teenager wearing braces and an everyday hairstyle, this boy’s achievements makes him anything but, ORDINARY! American People
Male Tiktok Stars
Male Social Media Stars
American Musical.ly Stars
American Social Media Stars
The Meteoric Rise To Stardom
Tyler Brown was a regular boy until the YouTube and TikTok (earlier known as Musical.ly) bugs bit him. It wasn’t long before Brown, a typical next-door boy who has braces on and sports a shaggy hairstyle with tons of photos on Instagram broke into the world of videos. He entered with a bang and created an everlasting impact on people in a short span of time of merely a year. He has over 50,000 subscribers on YouTube and a whopping 500,000 followers on Instagram. Plus he also has more than 1.8 million fans, 287 musicals and 66 million hears on TikTok! Need we say more about his popularity? He is an average student who scores a decent GPA of about 3.9. However if his score were to measured in terms of numbers after his YouTube clips hit the market, his popularity GPA would be nothing less than a perfect 10!
Recommended Lists:

The Hottest Male Celebrities With The Best Abs
Continue Reading Below
What Makes Tyler Brown So Special
There are millions of people who are trying to woo the world with their talent. However this is something that comes naturally to our very own Tyler; he has a natural knack with the crowd that makes him an absolute heart throb. It is his whimsical way of presenting videos that appeals the most to the huge number of subscribers that he has to his credit. He has a quirky way of dancing while singing in his videos which only acts as a catalyst in pumping up your mood. There is absolutely no way you can’t fall in love with this little rock star after watching him radiate so much of positivity and happiness. It is these qualities of his that make him a cut above the rest of his contemporaries and a total favorite among the youth of today.

Beyond Fame
Tyler Brown who is known in the world of YouTube by the name ‘Tylerxbrown’, also became a member of the famous ‘TLG Tour’ in the year 2016. Earlier the same year it was reported that Brown along with his friend Brandon were almost put behind bars for illegally interacting with their fans. If certain sources are to be believed, it is said that this blooming American star has a net worth of approximately $100 k. He is widely known for his super popular ‘itztylerbrown TikTok’ account that has garnered him a lot of fame. A lot of people confuse him with another YouTube personality with the same name as his, however the latter has a different username called ‘YaboyTy’.
Behind The Curtains
Tyler is the eldest among three siblings; he has two younger brothers, Christopher and Brody. Though this teenager is not dating anyone, a particular Instagram post of his to @nikkivalenzuela racked up a lot of rumors as he referred to her as “amazing” and “queen.” He also seems to really admire Bryana Ramirezz who is believed to attend the same school/college as Tyler. Though we would love to know more about this star, not much information is available about his schooling or his parents. 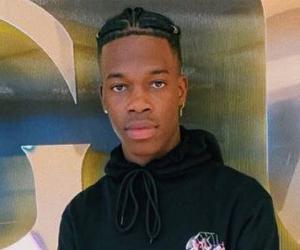