(One of the Greatest Rappers of All Time)

Christopher George Latore Wallace, known by his stage names ‘Biggie Smalls,’ ‘The Notorious B.I.G,’ or ‘Biggie,’ was an American rapper. He is counted amongst the greatest and most influential rappers ever. At the time when West Coast hip hop was dominating the mainstream, his debut album ‘Ready to Die’ became a huge success. While the release of the album made him a prominent figure in the East Coast hip hop scene, visibility of New York City in the genre increased. The very next year ‘Junior M.A.F.I.A,’ his protégé group comprising of his childhood friends released the group’s debut album ‘Conspiracy’ which led to chart success. He was remarkable in penning down dark semi-autobiographical lyrics and was noted for his storytelling abilities. He tasted success at a very young age, becoming the top-selling solo male rapper and artist of the genre in the U.S. He got involved in the escalating feud between East Coast and West Coast hip hop. He was murdered by an unidentified assailant in 1997 in Los Angeles. After sixteen days of his murder, his double discs album ‘Life After Death’ was released. The album peaked at No. 1 spot on the U.S. charts and received diamond certification. American Celebrities
Rappers
Musicians
Black Rappers
Black Singers
Childhood & Early Life
Biggie Smalls was born on May 21, 1972, at ‘St. Mary’s Hospital’ in Brooklyn, New York, to Voletta Wallace and Selwyn George Latore. His mother was a Jamaican preschool teacher and his father was a small-time politician and welder.
He had a rough childhood as his father left the family when he was just two years old. His mother had to take up two jobs to sustain the family.
He attended the ‘Queen of All Saints Middle School’ where he excelled in English and won many awards. He became overweight by the age of 10 and was nicknamed ‘Big.’
From an early age, he had seen many drug addicts and dealers all around him. Biggie started dealing drugs as early as 12 while his mother went out for work.
He attended ‘George Westinghouse Career and Technical Education High School’ after transferring from ‘Roman Catholic Bishop Loughlin Memorial High School.’ His mother Voletta said he adapted a ‘smart-ass’ attitude, though he was still a good student.
He dropped out of school at 17 and gradually got involved in criminal activities. He was arrested in Brooklyn in 1989 on weapon charges and was sentenced for probation of five years.
He was again arrested in 1990 for violating his probation and again after a year for drug dealing in North Carolina. He had to stay in jail for nine months before getting bail. 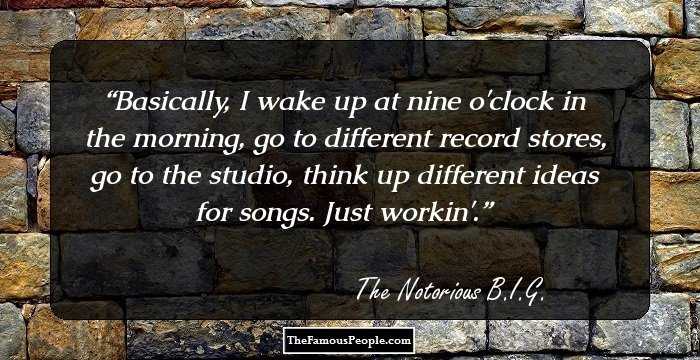 Black Musicians
Hip Hop Singers
Lyricists & Songwriters
Black Hip Hop Singers
Career
While leading his uncertain life as a teenager, he began exploring music and performed rap on streets with local groups, such as ‘Techniques’ and ‘Old Gold Brothers.’
He made a casual demo tape titled ‘Microphone Murder’ under the name ‘Biggie Smalls.’ The name was inspired from his own stature as well as from a character of a 1975 film ‘Let’s Do it Again.’ The tape was promoted by Mister Cee, a New York based DJ and was heard by the editor of ‘The Source.’
In March 1992, the ‘Unsigned Hype’ column of ‘The Source,’ which is dedicated for aspiring rappers, featured him. The ‘Uptown Records A&R’ signed him after hearing the demo tape.
In 1993, when Sean Combs, the record producer of ‘Uptown Records A&R,’ was fired, Biggie Smalls signed with Combs’ ‘Bad Boy Records.’
On August 8, 1993, he had his first child T’yanna, a daughter from his long-time girlfriend. He split with his girlfriend before his daughter was born, but wanted his daughter to complete her education. To financially support T’yanna, he continued to deal with drugs. When Combs came to know about this, he made Biggies Smalls quit.
In 1993, he worked in the remix of Mary J. Blige’s ‘Real Love.’ While working for ‘Real Love,’ he used the pseudonym ‘The Notorious B.I.G.,’ the name he used for the rest of his career. He followed up his work with ‘What’s the 411,’ another remix of Blige. He debuted as a solo artist in the film ‘Who’s the Man?’ with the single ‘Party and Bullshit.’
As a solo artist he hit the pop chart on August 1994 with ‘Juicy/Unbelievable.’ His debut album ‘Ready to Die’ was released on September 13, 1994 and attained the 13th position on the ‘Billboard 200’ chart. It also received six platinum certifications from the ‘Recording Industry Association of America’ (RIAA). At a time when the West Coast hip hop was dominating the mainstream, this album became a huge success, making him a prominent figure in the East Coast hip hop scene.
In July 1995, the cover of ‘The Source’ featured him along with the caption ‘The King of New York Takes Over.’ In August, he was named as ‘Lyricist of the Year,’ ‘Live Performer of the Year,’ and ‘Best New Artist (Solo)’ by ‘The Source.’ Also, his album was named the ‘Album of the Year.’ He also became the ‘Rap Artist of the Year’ at the ‘Billboard Awards.’
He became friends with rapper Tupac Shakur and often visited his house and traveled together. According to emcee Yukmouth, Biggie Smalls’ style was inspired by Shakur. Later, he got involved in a feud between East Coast and West Coast hip hop with Shakur.
Continue Reading Below
In August 1995, ‘Junior M.A.F.I.A’ his protégé group comprising of childhood friends released their debut album ‘Conspiracy’ which led to chart success. The album received gold certification and two of its singles, namely ‘Get Money’ and ‘Player’s Anthem’ went platinum and gold, respectively. He became the highest-selling solo male rapper and artist on the U.S. pop and R&B charts.
Recording of his second album began in September 1995 but was interrupted due to injuries, hip hop disputes, and legal squabbles. In the album ‘HIStory,’ he worked with Michael Jackson.
He was arrested outside a nightclub in Manhattan on March 23, 1996, for manhandling and threatening to kill two of his fans who were seeking autographs. He faced a sentence of 100 hours of community service. Again in the middle of the year, he was arrested from his home at Teaneck, New Jersey, for possessing weapons and drugs.
On September 7, 1996, Shakur was shot in Las Vegas, Nevada, and he died six days later. Rumors of Biggie Smalls’ involvement in Shakur’s murder were doing the rounds and were reported immediately.
While he was recording his second album ‘Life After Death,’ he met with an accident that crushed his left leg and made him wheelchair bound for a short time.
In January 1997, he faced an order to pay 41,000 USD for a dispute that occurred in May 1995 where a concert promoter’s friend accused him and his entourage of beating him up.
In February 1997, he went to Los Angeles to promote his upcoming album ‘Life After Death’ which was scheduled for March 25 release.
On March 7, 1997, he attended the 1997 ‘Soul Train Music Awards’ and presented an award to Toni Braxton. On March 8, he attended the after party at ‘Peterson Automotive Museum,’ hosted by ‘Quest Records’ and ‘Vibe’ magazine.
16 days after his murder in Los Angeles, his double disc album ‘Life After Death’ was released. The album peaked at No. 1 spot on the U.S. charts. It received a diamond certification from ‘RIAA,’ the highest honor that can be awarded by ‘RIAA’ to a solo hip hop album. His other posthumous albums include ‘Born Again’ (1999), ‘Duets: The Final Chapter’ (2005), and ‘The King & I’ (2017).
Continue Reading Below
Two of his compilation albums are the 2007 released ‘Greatest Hits’ and 2009 released ‘Notorious: Original Motion Picture Soundtrack.’ 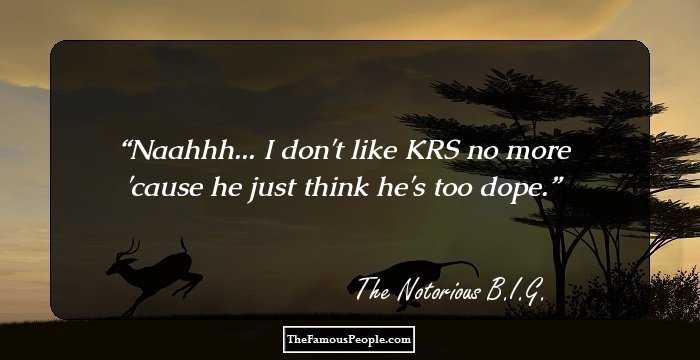 Black Lyricists & Songwriters
American Men
New Yorkers Musicians
Tall Celebrities
Personal Life & Legacy
His first child T’yanna, a daughter from his long-time girlfriend, was born on August 8, 1993.
On August 4, 1994, he married Faith Evans, an R&B singer. Their son Christopher ‘C.J.’ Wallace, Jr. was born on October 29, 1996.
After attending the party at ‘Peterson Automotive Museum’ on March 8, 1997, which was hosted by ‘Quest Records’ and ‘Vibe’ magazine, he left in a SUV at around 12:30 a.m. on March 9. While his SUV stopped at a signal, a dark-colored Chevrolet Impala SS stopped by the side of his car and the driver shot him multiple times. He succumbed to his injuries at the ‘Cedars-Sinai Medical Center’ at 1:15 a.m.
Though the mystery of his murder is not yet solved, there are different theories revolving around the motive and identity of the murderers.
On March 18, 1997, his funeral, attended by around 350 mourners, was held at Manhattan’s ‘Frank E. Campbell Funeral Chapel.’ After the cremation, the ashes were handed over to his family.
Recommended Lists:

Tall Male Celebrities
Male Singers
Male Rappers
Gemini Singers
Facts You May Not Know About Biggie Smalls
He was described as ‘the savior of East Coast hip hop’ by ‘All Music.’
In 2002, he was named the ‘greatest rapper of all time’ by ‘The Source’ in its 150th issue.
In 2006, he was ranked third in MTV’s list of ‘The Greatest MCs of All Time.’
In 2009, ‘Notorious,’ a biographical film on him was released. The film garnered $44.4 million globally. The producers of the film include his mother Voletta Wallace and Sean Combs.
‘Billboard’ named him the ‘greatest rapper of all time’ in 2015.
His lyrics have been quoted by many pop, hip hop, and R&B artists, including Michael Jackson, Jay-Z, Usher, and Lil Wayne among others.
An annual ‘black tie dinner’ is held by ‘Christopher Wallace Memorial Foundation’ to raise funds to meet supplies and school equipment for children. 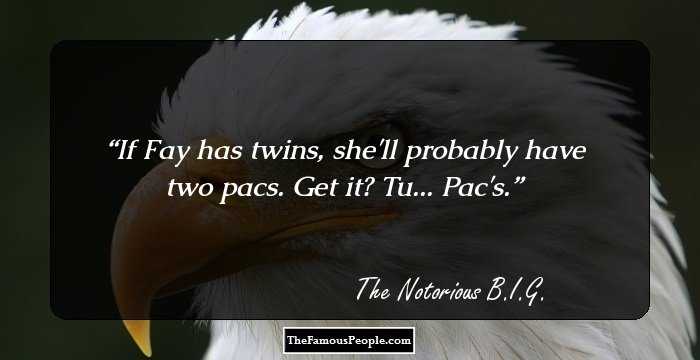 See the events in life of The Notorious B.I.G. in Chronological Order