One of the greatest R&B singers of all time, Faith Evans is a Grammy Award winner who began to sing at the age of two. She is one of the most muti-talented singers and musicians in the music industry. A hip-hop vocalist and a composer, Faith Evans is one of the most gifted and skillful songwriters. A victim of the many violent crimes in the hip-hop music industry, she witnessed all the grueling violence to which she lost her husband, rapper The Notorious B.I.G, who was murdered mysteriously. In order to pay tribute to her slain husband she performed for the song, ‘I'll Be Missing You’, which became one of the most popular and bestselling songs of all time. She is also one of the most successful record producers and has managed to achieve great success in that arena. She has also been an actress and has worked in a few films and minor television roles. Her autobiographical book titled, ‘Keeping the Faith’, was one of the bestselling books featured on The New York Times bestsellers list.
Continue Reading Below American People
Lyricists & Songwriters
Record Producers
Rhythm & Blues Singers
American Women
Childhood & Early Life
Faith Ren�e Evans was born to Richard Swain, an Italian musician and Helene Evans, an African-American singer. He was raised by her aunt and uncle Johnnie Mae and Orvelt Kennedy.
She began singing since she was two years old and by the time she turned four she sang at the congregation of the Emmanuel Baptist Church, Newark. At University High School in Newark, she sang with jazz bands.
In 1991, she graduated from high school and began to study marketing at the Fordham University in New York City, but eventually dropped out. 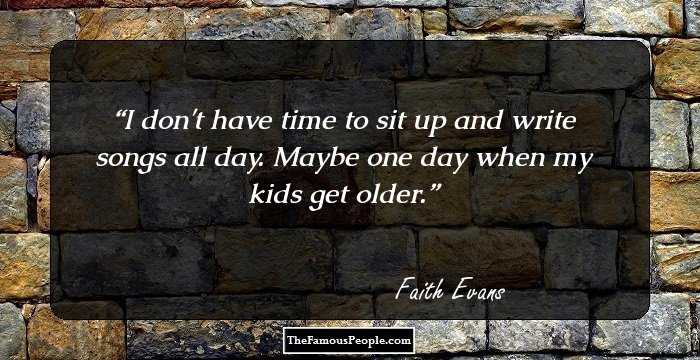 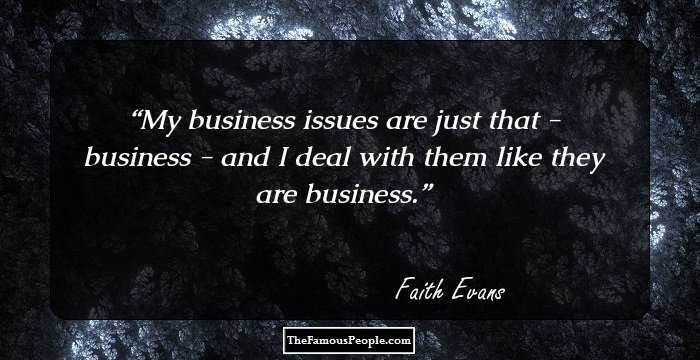 Quotes: Like, Business
Personal Life & Legacy
She has a daughter named, Chyna, with music producer, Kiyamma Griffin.
On august 4, 1994 she got married to rapper Christopher ‘The Notorious B.I.G.’ Wallace, with whom she had a child named, Christopher Wallace Jr. in 1997. She separated from Wallace in 1997 before he was murdered mysteriously.
In 1998, she had a son named Joshua with a record company executive Todd Russaw. In 2007, the couple got married and subsequently had their second child. In 2011, she filed for divorce.
In 2008, she came out with her autobiography titled, ‘Keep the Faith: A Memoir’.
Trivia
This Grammy Award winning R&B singer was once arrested for drunken driving in California.

Quotes By Faith Evans | Quote Of The Day | Top 100 Quotes

See the events in life of Faith Evans in Chronological Order