Advanced Search
Theodore John Kaczynski is an infamous American criminal who became known for a campaign of letter bombs he sent by the name ‘Unabomber’. Kaczynski was a mathematics prodigy and had a promising career which he abandoned in 1969 to bring ‘a revolution against the industrial system’. He was always a bright child and showed interest towards Mathematics from an early age. He enrolled into Harvard University and then at University of Michigan. He took the position of assistant professor at University of California at Berkeley. But after a while, he left the job and drifted from his normal life. He went on aimlessly roaming from city to city. Finally in 1971, along with his brother, Kaczynski purchased a plot of land and lived in a cabin that he had built on the land. It was in this house that he wrote the manuscript of ‘Unabomber Manifesto’. Over the course of next 20 years, he delievered a number of letter bombs which resulted in three fatalities. In 1995, Kaczynski went a step ahead and sent out essay on problems of modern society. He wanted the media to give highlight to his essay and even threatened them if they dared to ignore him. Finally, in 1996, he was arrested with the help of his sister-in-law and younger brother, David. Samantha Lewthw...
DID WE MISS SOMEONE?
CLICK HERE AND TELL US
WE'LL MAKE SURE
THEY'RE HERE A.S.A.P
Quick Facts

education: Harvard College, University Of Michigan College Of Literature, Science, And The Arts

American People
American Men
Male Criminals
Gemini Criminals
American Criminals
Childhood & Early Life
Ted Kaczynski was born on 22 May 1942, in Chicago, Illinois. His parents were Wanda and Theodore who were Polish Americans. He has a younger brother named David Kaczynski.
When he was a baby, he suffered allergic reaction due to some medication. As a result of this allergy, he was advised to spend some time in isolation while recovering. It was during this time, he started to show changes in his behaviour.
Some reports even claim that the birth of his brother, David, also had severe effect on him.
His family moved to Evergreen Park which was a suburb of Chicago. Kaczynski was a bright child and was often regarded ‘different’ due to his intelligence. He also took part in German language and chess clubs.
Ted Kaczynski went to Evergreen Park Community High School in Illinois, southwest of Chicago. He was a bright student and excelled in all the subjects. In this particular period, Kaczynski began to show more interest towards Mathematics.
He would spend hours studying and solving mathematical problems. Eventually, he also joined study groups of boys who had keen interest in science and math. These boys came to be known as ‘briefcase boys’ because they all used to carry briefcases.
At the age of 15, Kaczynski graduated from High School after being ahead of all his classmates. For being exceptionally brilliant in studies, he was motivated to apply for Harvard University.
In 1958, Ted Kaczynski enrolled in Harvard University on a scholarship. At Harvard, Kaczynski studied Mathematics and also became a part of psychological experiment. This experiment was conducted by Professor Henry A. Murray where the members had to endure extensive verbal abuse. Such psychologically challenging experiment also brought changes in him.
In 1962, he graduated from Harvard and pursued studies at University of Michigan. At Michigan, he used to take classes and write his thesis. In 1967, Kaczynski finally got his doctorate degree and later, he moved to teach at University of California, Berkeley. 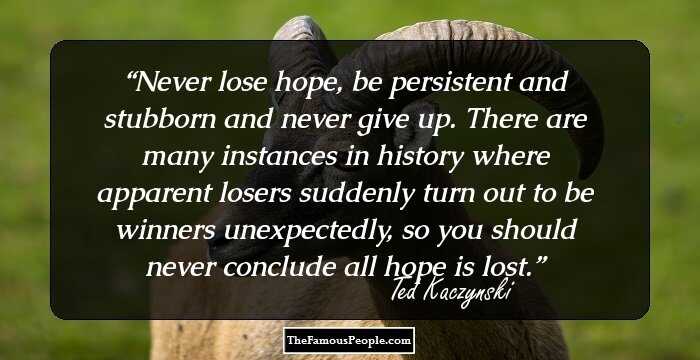 Continue Reading Below
Career
In 1967, Ted Kaczynski was the youngest assistant professor to teach Mathematics in the University of California, Berkeley. He used to teach geometry and calculus to undergraduate students.
He wasn’t popular with the students and his teaching was straight from textbook. Due to his complex behaviour, he found it difficult to associate with the students.
When things were supposed to move smoothly, Kaczynski started to have problems with his professional life. He found it hard to deliver lectures and to strike a connection with the students. He abruptly decided to leave the job and resigned from his assistant professorship in 1969.
His resignation came as a shock to the chairman of the department of mathematics who were impressed by his dissertation, publications and knowledge in the field of Mathematics. 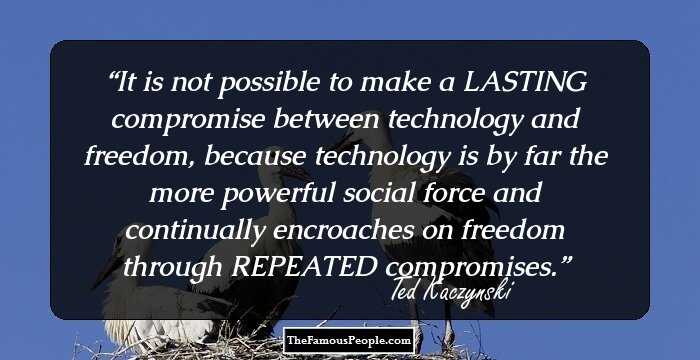 Bombings
After leaving his job, Ted Kaczynski went on drifting from city to city. Finally, he managed to take a plot and built a cabin near Lincoln where he lived in isolation. There was no electricity or running water in the house. He would spend most of his time reading books and writing down manuscripts which were later known as ‘Unabomber Manifesto’.
In 1978, Kaczynski delivered his first mail bomb to Buckley Crist who was a professor of engineering at Northwestern University. On May 25, 1978, Crist received the package in a parking lot at the University of Illinois, Chicago. Crist grew suspicious of the package and contacted the campus police. The package was opened by Officer Terry Marker which resulted in explosion and left injuries on his left hand. Marker only suffered minor injuries.
His next target was bigger as Kaczynski went after American airline companies with two bombs. One bomb was planted in 1979 in the cargo hold of American Airlines Flight 444 which could not explode on the flight due to faulty timing mechanism. While the other was directed towards the president of the United Airlines who also suffered minor injuries.
Since bombing an airline is a federal crime, FBI also got involved in the case. The case was named by the acronym UNABOM which was named after UNiversity and Airline BOMbing, and Kaczynski was known as ‘Unabomber’.
Continue Reading Below
In December 1985, Kaczynski’s first victim died. He was a computer store owner who died after the bomb exploded outside his shop. Over the next decade, two more deaths and few injuries happened due to Kaczynski’s bombs.
Arrest
Ted Kaczynski dug his own grave when he decided to send out a 35,000-word essay to the media. The essay was on the various problems of modern society. According to reports, Kaczynski wanted the media to publish his work and show it to the whole nation. He even threatened The New York Times that if they didn’t publish ‘Unabomber Manifesto’ then he would blow up a plane.
Subsequently, Linda Patrik, Kaczynski’s sister-in-law read the manifesto and also shared it with her husband. David recognised his brother’s writing style and consulted the private detectives.
On April 3 1996, Ted Kaczynski was arrested from his cabin in Montana. Two years later, he got life sentence for his actions over the years. 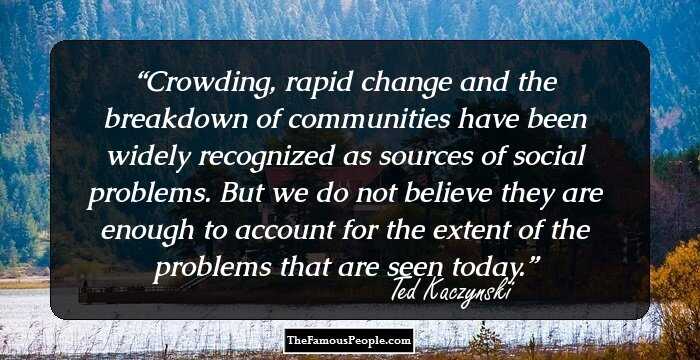 Quotes: Believe
Major Works
Though deemed as a national terrorist by the USA, Ted Kaczynski was a brilliant mind. He wrote ‘Another Proof of Wedderburn’s Theorem’ in American Mathematical Monthly in 1964.
Though a destructive work by Kaczynski, his essay titled ‘Industrial Society and Its Future’ is still known among masses. In the essay, he has described the ill- effects of industrial revolution. He has also pointed out how the Industrial Revolution will prove to be a disaster to the mankind.
Personal Life & Legacy
When Ted Kaczynski was working in a factory with his brother in 1978 in Chicago he had an affair with a female supervisor. But the relationship didn’t go further and turned sour. As the relationship ended, Kaczynski humiliated her by writing crass limericks about her. This resulted in his dismissal from the factory.
Trivia
Ted Kaczynski was often bullied by his peers which also resulted in his complex behaviour.
When he was living in total isolation in Montana, he would hunt rabbits, grow vegetables and read books.
While in jail, Kaczynski has tried to commit suicide many times.

Quotes By Ted Kaczynski | Quote Of The Day | Top 100 Quotes

See the events in life of Ted Kaczynski in Chronological Order