Tayvion Power is an American YouTuber, Viner and comedian. He is one of those modern day teens who have successfully harnessed the power of internet in their favor. Born to an entertainer father, Tayvion seems to be juggling multiple forms of entertainment with distinctive ease. He is a successful Vine star with millions of followers. He has recently made his foray into YouTube showcasing his acting and comedic talents on the platform through regular videos.

His talent and his unique personality attract people towards his social media accounts and he has hundreds of thousands of followers on social media. Tayvion is all set to become the hottest new sensation in the entertainment scene by virtue of his acting talent and impeccable comic timing. American People
Instagram Comedians
American Men
Male Viners
Male Youtubers
Rise to Stardom
Stardom found Tayvion quite early. He uploaded his first video on Vine (the short 6 second long looping video playing platform) at the age of 12. It was in June 2013 and the video went viral among vine users. As Tayvion started uploading more and more videos, his popularity soared. Within the first 5 months of his posting the first video, Tayvion had more than 200,000 people following his account!
Recommended Lists:

American Viners
Capricorn Youtubers
American YouTubers
Male Instagram Stars
His creativity and ingenious content captured the viewer’s attention and he has been able to retain their interest by his talent. His Vines are hilarious and his timing as a comic is exceptional. No wonder his Vine account had accumulated more than 1.2 million followers making him one of the most successful teenagers in the platform. He has also collaborated with other Viners and YouTubers like Carter Reynolds and Malak Wilson.
Recommended Lists:

Male Social Media Stars
Male Instagram Comedians
American Instagram Stars
American Social Media Stars
He has seen success on other social media platforms as well. Glimpses of his cool life seem to draw users to his Instagram account, which is also quite popular with more than 100K followers. Twitter is relatively untapped but looks like he will soon set to catch up his other social media accounts.
Recommended Lists:

American Instagram Comedians
Capricorn Men
He has also started uploading videos to his personal eponymous YouTube channel since April 2016 and is gradually catching the attention of users. In the 1 year he has been active on the platform; his subscriber count has reached over 27,000. The channel mainly features vlogs, skits, QnA sessions and various crazy challenge videos.

Continue Reading Below
What Makes Tayvion Power So Special
The teenager seems to be cut out for a career in entertainment. He is innately funny and a born entertainer. His content in vine as well as in YouTube is funny and he has this instinctive sense of what the viewers might enjoy watching. His delivery is replete with vernacular references that also endear him in the African-American community. He has this cool swag quotient that reflects into the videos and the viewers love him for that. From a talented kid to a confident teen, Tayvion seems destined to become a dashing young entertainer all set to rule the social media world.

Behind The Curtains
Tayvion was born and brought up in the Washington D.C area. His father, DeStorm Power, is also in the entertainment business as a YouTuber, Viner, comedian and musician. His mother died when he was just 7 years old and he was brought up by his father’s girlfriend. It seems that Tayvion has inherited his father’s entertainer genes and is following quite well in his footsteps. His educational background is not known. Neither is his relationship status. He currently resides in Los Angeles, California with his father 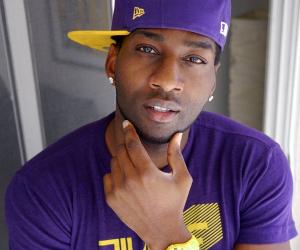