Takeshi Kaneshiro is a Taiwanese–Japanese actor and singer, better known for his performances in the films ‘Fallen Angels’ and ‘Hero.’ Takeshi started his career with singing and released his debut album, ‘Heartbreaking Nights,’ in 1992. The enormous success he achieved with his debut musical endeavor helped him achieve success in his acting career too. He enrolled into the film program of ‘New York University’ but dropped out within a year. Following the success of his album, he plunged into acting the very next year, with ‘Heroic Trio 2: Executioners.’ His success as an actor made him retire permanently from music. His biggest career breakthrough was in the year 1994, with Wong Kar-wai’s ‘Chungking Express.’ The film became a huge success and had an American release, receiving success there too. As a result, Takeshi’s career grew in leaps and bounds and the next year saw the release of the film’s sequel, ‘Fallen Angels,’ which was again critically and commercially acclaimed. Takeshi had by then established himself as a major actor and continued with more successful films and TV series such as ‘God, Please Give Me More Time,’ ‘Golden Bowl,’ and ‘See You Tomorrow.’ Japanese People
Taiwanese People
Japanese Men
Libra Actors
Male Singers
Libra Singers
Childhood & Early Life
Takeshi was born to a Taiwanese mother and a Japanese father, on October 11, 1974. He grew up in Taipei, Taiwan. He holds a Japanese citizenship since birth. He belonged to an affluent business family and his parents gave him everything he desired as a kid. He soon became addicted to cinema and spent countless hours watching national and international films.
The Hong Kong film industry was finding its footing at that time, and most films Takeshi came to love as a kid were from the industry. He would often run away with his elder brothers to watch movies, as their parents did not allow them to watch too many movies.
An active teenager, he started exploring music as he grew up, and all his early teenage years were solely dedicated to singing and learning to play the guitar.
He attended the ‘Taipei Japanese Junior High School,’ and then enrolled at the ‘Taipei American School,’ where he was introduced to Hollywood and the English language for the first time. Soon, he became quite fluent in English.
While in high school, he started auditioning and soon started receiving offers to star in TV commercials. He did not quite finish his education and started acting instead, in order to gain a foothold in the industry.
He was made famous by the advertisements he did. He also got the chance to sing for a few of his commercials. His minor singing stints got him in touch with a major record company that helped him release his debut music album.
Continue Reading Below
You May Like

The Hottest Male Celebrities With The Best Abs
Career
Takeshi released his first album, titled ‘Heartbreaking Nights, in 1992. Although the album was in Japanese, a few songs were in Cantonese and Mandarin to appeal to Chinese listeners too. The album was a major success and brought Takeshi in the limelight. He started receiving offers to star in many Hong Kong films, and in the very next year, Takeshi made his acting debut.
He made his film debut with the 1993 film ‘Heroic Trio 2: Executioners’ and followed it up with major roles in films such as ‘Mermaid Got Married’ and ‘The Wrath of Silence.’ These two projects got him noticed by celebrated director Wong Kar-wai, who then came in touch with Takeshi and without a formal audition, offered him a role in his film ‘Chungking Express.’
The film was about three lonely people in Hong Kong and how they eventually find their way to happiness. The film was released in 1994 and became a major hit. Hollywood director Quentin Tarantino watched the film in a film festival and immediately offered to release it in the US. The film was moderately successful in the US too.
The next year, Takeshi starred in the sequel to ‘Chungking Express,’ titled ‘Fallen Angels,’ and the film repeated the success story of its first instalment. Takeshi was riding high on success, and needed to tread carefully, as he was being deluged with film roles.
Takeshi then starred in films such as ‘School Days,’ ‘Trouble Maker,’ and ‘Lost and Found.’ He was appearing in about half a dozen films in a year at one point in time.
In the late 1990s, he played the main lead in the Japanese drama ‘God, Please Give Me More Time,’ and the success of this endeavor paved his way to more Japanese films and dramas. He soon received an offer to star in the Japanese film ‘Returner.’ He was enjoying his success in Japanese and Hong Kong films and had become a sought-after actor.
In 2004, he appeared in the high-profile period epic, ‘House of Flying Daggers,’ directed by Zhang Yimou, whose previous film ‘Hero’ had been an international success. ‘House of Flying Daggers’ did not fare as good as Yimou’s previous movie, but it did make a solid impression at the local and the Asian box office, and Takeshi was remarkable in his role as a heartbroken warrior.
His appearance as a martial-arts expert was heavily lauded by critics and audiences. Making the most of his success, he appeared in the 2007 Jet Li-starrer hit ‘The Warlords,’ a film which went on to receive international acclaim.
Director John Woo, who began his career in Hong Kong and then achieved success in Hollywood, signed Takeshi for the leading role in his epic-drama film ‘Red Cliff.’ The film was released in two parts, one in 2008 and the other in 2009, and became successful. Although some critics were not particularly pleased with the way Takeshi had portrayed his character, he managed a decent review for his performance from many leading national and international film critics.
He was to play the lead role in the film ‘Ominusha,’ a role that would have been one of the most exciting film projects of his life. However, due to some unexplained reason, the film was shelved.
Takeshi continued starring in successful films such as ‘The Crossing’ and its sequels, ‘The Crossing 2’ and ‘See You Tomorrow.’
In 2003, just when his popularity had crossed the national borders, Takeshi received a mention in the prestigious ‘Time’ magazine, which described him as the Asian version of Hollywood star Johnny Depp. The article further stated that Takeshi’s appearances in the highly madcap roles and his mannerisms were reminiscent of a young Johnny Depp.
Takeshi has been the face of some leading brands in Japan, Taiwan, and China, such as ‘Prada,’ ‘Honda,’ ‘Sony Ericsson,’ ‘Lycos,’ and ‘Kiwi’ cold drink. He models from time to time and sings jingles for advertisements every now and then.
Personal Life
Takeshi Kaneshiro is a very religious man. He has remained a devout Buddhist since 1997, on his mother’s insistence.
He happens to carry a nihilist approach toward life and is known to delve into philosophical questions during his interviews. When asked about how he would like to be remembered, in one of his interviews, he seemed annoyed at the question and responded very coldly, stating that he did not care about it.
There has been no confirmed information on his relationship status. He is said to have stated that he would be the best husband and father when the time comes.
You May Like

See the events in life of Takeshi Kaneshiro in Chronological Order 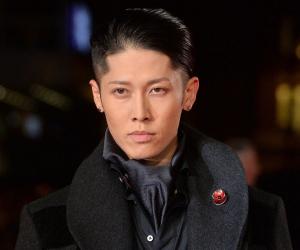