Sun Myung Moon was a Korean religious leader, a self-proclaimed messiah who was the founder of the Unification Church. He was a leading figure in what Eileen V. Barker, a professor emeritus of sociology at the London School of Economics, called “the great wave of new religious movements and alternative religiosity in the 1960s and 1970s in the West”. He built a religious movement notable for its mass weddings and authored ‘The Divine Principle’, the main theological textbook of the Unification Church. Born into a family of farmers in Korea, he converted to Christianity as a young boy along with his family. From an early age he observed his surroundings and was distressed by rampant injustice and sufferings of the people. He believed that religion addressed the fundamental human condition and only religion could provide a way for easing the sufferings of the people. He once had a vision of Jesus asking him to continue the work which he had begun on earth nearly 2,000 years before. In order to fulfill the Lord’s command he plunged head on into religious studies in order to understand the deeper questions of life. Eventually he moved to the United States and became a leading figure of the new religious movement. With time he also branched out into political activism and business. North Korean Celebrities
South Korean Celebrities
Pisces Men
Childhood & Early Life
He was born as Mun Yong-myeong on 25 February 1920, in modern-day North P'yŏng'an Province, North Korea. He was one of the eight children in a large farming family.
His family which initially followed the Confucianist beliefs converted to Christianity and joined the Presbyterian Church when Mun was around 10 years old.
At that time Korea was ruled by Japan and growing up oppressed in his own country made the boy sensitive to the injustices and sufferings around him. Early on he developed humanitarian sympathy for all living beings and was troubled by mans’ inability to cerate a just and loving world.
When he was 15, he had a vision of Jesus instructing him to carry on his unfinished work of uniting mankind by being their saviour.
He enrolled at Waseda University in Japan in 1941 to study electrical engineering. He became involved in student underground activities and was arrested and tortured for not revealing the names of his collaborators.
He was convicted by the the North Korean government of spying for South Korea and given a five-year sentence to the Hŭngnam labor camp in 1947. However, he escaped in 1950. 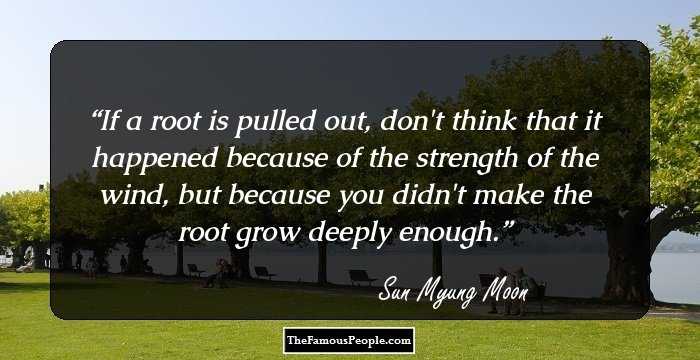 The Hottest Male Celebrities With The Best Abs
Later Years
He arrived at the southern port city of Pusan after escaping and it was here that he began his religious career in earnest. Along with a disciple, he built the first Unification Church using discarded army ration boxes.
At that time he had only a few disciplines, but was confident that one day his message would reach millions across the world. He founded the Holy Spirit Association for the Unification of World Christianity in 1954.
His religious movement garnered a lot of attention and soon he gained plenty of loyal followers. But his teachings also kindled much controversies and he was often arrested and thrown into jail. Yet each time he managed to get out as the authorities could not find any incriminating evidence against his alleged misdoings.
Along side with the Unification Church he also created a “Weeping Church”, known so because of his and his followers’ tearful prayers to the Lord. His religious teachings were gaining in momentum across the nation and by 1957 churches were established in 30 Korean cities and towns.
One of the most famous rituals that he created was the “blessing ceremony” or the “mass wedding”. This ritual was enacted by him to highlight the Unification Church’s emphasis on traditional moral values.
In 1964, Moon founded the Korean Culture and Freedom Foundation, which promoted the interests of South Korea and sponsored Radio Free Asia. Former U.S. Presidents Harry S. Truman and Dwight D. Eisenhower were named as honorary presidents of the organization at the time of its creation.
He moved to the United States in 1971 and founded the International Conference on the Unity of the Sciences, a series of scientific conferences in 1972. Several hundreds of participants have been a part of these conferences over the years.
In 1980 the followers of his church founded the CAUSA International as an anti-communist educational organization, based in New York, at his behest. It was very active during the 1980s with presence in 21 countries. In 1986, it produced the anti-communist documentary film ‘Nicaragua Was Our Home’.
Along with its religious activities, the Unification Church also supports and owns a number of businesses in various countries; most notable are its business interests in the Tongil Group, Pyeonghwa Motors, and News World Communications. 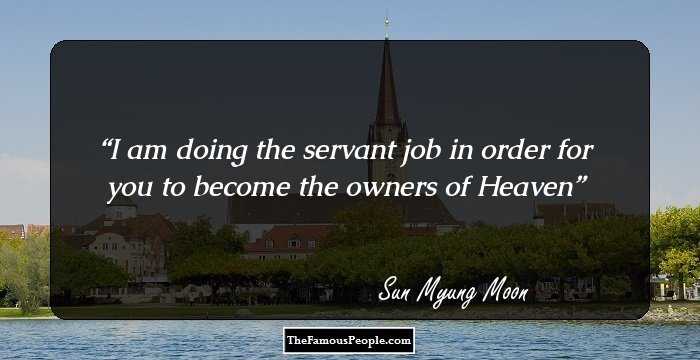 Quotes: You, I
Awards & Achievements
Moon was posthumously awarded North Korea's National Reunification Prize in 2012.
Personal Life & Legacy
He married Sun Kil Choi on 28 April 1945. A son was born to them. This marriage was a highly troubled one and ended in divorce in 1957.
He married again on 11 April 1960; his second wife was a young teenaged girl, Hak Ja Han, who would eventually bear him 13 children. The couple was referred to as “True Parents” by members of the Unification Church and their family as the "True Family".
He died on 3 September 2012 after a brief illness, at the age of 92.
You May Like